Now this is a suspense thriller and the way it unfolds, it almost reminds me of a less flashy Brian DePalma. It even has the old DePalma voyeurism. But what I’m talking about is it takes its time setting up all the pieces and giving you the information you need a chunk at a time. 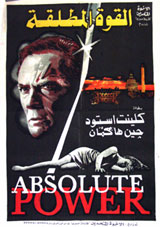 See, first Clint is in a museum sketching a painting. Right off the bat we know something is wrong because aren’t you supposed to make up your own picture, not copy somebody else’s painting? What the shit. Still, this is a clear indication that Clint agrees with me on my Theory of Badass Juxtaposition, giving his character a love of art.

Then we see Clint’s house, where he has a lot of art hanging on the walls. But some pretty fucking fancy art. Old stuff. Hmmm.

Then he drives out to a rich guy’s house and breaks in. This is when we learn that he is a burglar. Because of the fact that he is currently burgling.

Clint is not in a hurry at all, he seems to know for sure these people aren’t coming home any time soon. He’s wrong though, so he ends up hiding behind a two way mirror in the jewelry vault, watching as the lady of the house carries on a drunken affair with Gene Hackman, that asshole from the movies. This takes a while but eventually things get out of hand, Hackman slaps the girl, she slaps him back, he starts to strangle her, she stabs him in the arm with a letter opener, suddenly he yells “Help!” and a bullet goes through the girl and two armed guards run in.

Then Judy Davis comes in and as Clint sits there wondering what kind of shit he’s in, they all try to figure out what to do about this dead body. Gene Hackman is obviously an important pillar of the community type person judging by this support team, but right now he’s a pathetic drunk curled up on the bed whimpering. Only later do we see him introduced as “Mr. President” and realize, oh shit, that drunk’s the president. (I figure Clint must’ve known this while he was watching the murder, but he didn’t say anything because he was hiding.)

The presidential team cleans up the scene and make up a cover story involving a burglar, then as they’re on the way out they realize they forgot the letter opener (with Hackman’s blood and fingerprints on it). Going back in, they spot Clint rappelling out the window and realize that there really WAS a burglar. Good guy to pin this all on, since he’s the only one who knows the truth, etc.

It turns out the dead woman is the wife of the president’s best friend, a famous philanthropist who also funded the president’s political career. This is not usually how donors are treated in real politics but hey man, that’s the magic of cinema.

Clint is a great thief but he’s also an old man, and he’s never gone up against some fucking president guy before. He figures he’s out of his league, so he makes preparations to leave the country. But in the airport bar he happens to see a press conference where President Hackman puts his arm around the dead woman’s husband and pretends to be comforting him. And this pisses Clint off.

I mean look, every one of us has experienced this sort of thing at least 250,000-300,000 times since the year 2000 alone. You see the president saying some unbelievable bullshit on TV and you can’t believe that he somehow was able to top the one he said yesterday, and you feel like either your forehead is gonna pop a vein or you’re gonna reach right into the set like a reverse Nightmare On Elm Street 3 maneuver so you can throttle the motherfucker. It’s a familiar scenario to us, right? And all we do is we end up yelling at the TV or turning it off. But that’s us. We can’t do anything. This is different. This is Clint.

So it’s at exactly this moment that the movie steps over the line from suspense thriller to the territory of Badass Cinema. ‘Cause Clint burns a hole through the TV with his squinty eyes and says, “You heartless whore – I’m not running from you.”

Next scene, he’s on the White House tour wearing a fake beard. I’m sorry, United States Government, I regret to inform you that you chose the wrong motherfucker to fuck with.

Because this is Clint’s movie, there is also a whole subplot about his strained relationship with his daughter, played by Laura Linney. She’s still angry because he wasn’t there for her, always off stealing or in the can or something. But then she discovers that he actually was there, sneaking around in the shadows of her life, looking out for her, even checking her refrigerator to be sure she’s getting enough nutrients. This is one of many forgivably phoney elements of the story. It’s also hard to buy that the president doesn’t have a bigger security team, and alot of the press coverage seems fake, and when he gets what’s coming to him it’s kind of hard to believe it could really happen that way. But oh well.

I gotta say, I almost prefer this type of Clint Eastwood movie to the Serious ones. By which I just mean I like it better than Mystic River. What they do, they set up this clever old man disguise wearing thief, and the bad situation he gets in when he just happens to see the president have rough sex and then have his lady friend killed. Then they set up the secret service guy who wants to silence him (Dennis Haysbert, from the tv commercials), and the other secret service guy (some other actor) whose intentions are ambiguous, and the old man who thinks Clint killed his wife, and the assassin hired to kill Clint, and the cops (including Ed Harris, Knightriders) who are trying to catch him because they think he did it. And then you watch all these different factions line up and collide and you feel all suspensed and it’s an explosive whiteknuckle thrill ride or whatever.

Well I guess that’s how suspense movies always work so I’m not telling you anything new here. But when Clint does it it’s something special.

Clint Clint Eastwood Ed Harris Gene Hackman Laura Linney William Goldman
This entry was posted on Friday, January 14th, 2005 at 9:36 am and is filed under Crime, Reviews, Thriller. You can follow any responses to this entry through the RSS 2.0 feed. You can leave a response, or trackback from your own site.

One Response to “Absolute Power”