Ahoy, squirts! Quint here with everybody’s favorite outlaw, Vern, a bloke that has a certain way about him… a certain quality in his written adoration of action stars and their direct-to-video adventures. I can’t get enough of this guy. You tell me Steven Seagal or Van Damme or now Snipes has a new direct-to-video actioneer out I don’t think I’d bother to read the whole title, but damned if I wouldn’t read a 2,000 word review on it if it were written by Vern. I have a feeling that Vern’s reviews (negative or positive) are better than most movies he’s reviewing. Anyway, here’s the man himself. Enjoy!

Or whoever’s home. I got an important dispatch for you from direct-to-video land. This one is regarding one called 7 SECONDS which I only care about because it stars Wesley God Damn Snipes.

That’s right, Wesley’s gone DTV. This is actually his second. The first one was called UNSTOPPABLE which is a good title for a Wesley Snipes film, except in that one his character really was pretty stoppable. Or at least nobody was really trying to stop him from doing anything, as far as I could tell.

[Before I go any further, I want to say upfront that this is gonna be an essay about Wesley Snipes as much as a review of 7 SECONDS. So I don’t want to see any wiseasses asking where the review is. But I probaly will.] 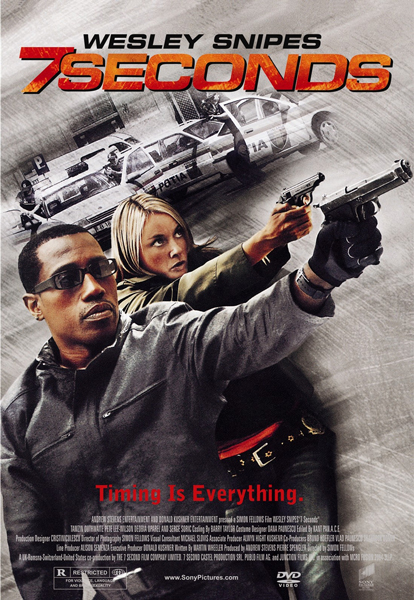 Now I admit, without the BLADE saga I probaly wouldn’t give two shits about Wesley Snipes. But his great performances in all three of those movies made me realize that he is exactly the great American action star Hollywood has been looking around for and not finding. Van Damme and Seagal went DTV, Bruce pursued other options, Schwarzenegger and Stallone got worn out, Vin Diesel might’ve been a mistake, and they haven’t figured out what to do with The Rock yet. So meanwhile they’re thinking well, what about those other guys we use in the regular movies. Actors, I think they’re called. But the only two they can think of is Ben Affleck and Matt Damon. I guess Damon’s working out in the James Bourne movies. But otherwise I don’t know.

And meanwhile, over here, is Wesley God Damn Snipes. A dramatic actor that can run circles around either of the will hunting guys until they get dizzy watching him and tip over. And yet, at the same time, a bad motherfucker. The only guy who can both star in Spike Lee movies and whoop ass in capoeria, or however you spell that thing. I admit, I skipped the whole Wesley-&-Woody period. And most of his action vehicles are garbage. I like a good DIE HARD ripoff, but PASSENGER 57 is no SUDDEN DEATH. And I couldn’t even get all the way through ART OF WAR. But even you weirdos who don’t enjoy the BLADE movies oughta be able to recognize what he brought to them. He brings complete dedication to every aspect of the character – the stoic samurai icon, the cocky trash talking street fighter, and the super hero. You believe that dude is a super hero because of the way he stands, the way he moves. In these movies, he is a genius, and I say that without fear of trouble in the talkbacks because the more obnoxious fuckers in there can’t get through a paragraph this long without skimming. The rest of you are cool though, good job with the attention span. You’re gonna need to keep it up to get through this one, sorry.

There are people who do better action than him, but you’d have trouble naming many who still have the same balance of action and acting skill. (Thomas Jane is the only contender that comes to mind.) And the BLADE movies are popular, even the third one that wasn’t as good as the other two. You’d think he’d be able to do whatever he wants. But here he is going straight to video.

Maybe the guy is just an asshole? There were stories about tension on the set of BLADE PART 3, and Dave Goyer having to have that wrestler Triple H as his bodyguard (henchman?) on set. On the DVD, Goyer tells a funny story about Wesley Snipes refusing to do certain things in the script that he felt Blade wouldn’t do, like leaving the interrogation room alongside the smart allecky kid that rescues him. “But there’s only one door in the room, where is he supposed to go?” “That’s you’re problem.” The thing is, Snipes was obviously right. He knows his Blade. And his demands led to the “Forgot my sword” joke, which is one of the pure Blade moments in the movie. But I can see why some directors wouldn’t want to work with an actor who does things like that.

Whatever the problem is, here he is in 7 SECONDS, and I’m happy to say that this one’s above average for a direct to video movie, and much better than UNSTOPPABLE. I’ll probaly forget what it was about before I even finish this review, but at least I didn’t feel like I was wasting my time while I was watching it. That’s unusual in DTV.

It’s a typical heist story, not the gritty character driven pulp novel type that I like, but the more action movie/shootout/car chase type. Snipes and his gang pull off a major robbery, which includes a Van Gogh painting that may or may not be a phoney, but definitely is worth $65 million in insurance money to some guy who I fucking SWORE was Gollum from the Lords of the Rings movies, but the credits and my trusty friend the internet don’t back me up on this one. (I can verify that he’s in two other movies by the same director, at least.) So another gang kills most of Wesley’s guys and kidnaps his girlfriend (who’s also the security guard that fingered the job), but he gets away with the painting in a case.

So the movie’s about Wesley trying to save the girl, the bad guys trying to get the painting, some cops trying to get Wesley, and Wesley flirting with a blond gal military cop that’s after him. You get a couple car chases, a couple fights, etc. It’s mostly what you expect and it’s not great filmatism. There’s some bad editing and music, and some white flashes (luckily no Avid farts). You watch a movie like this, you want to send the director a DVD of RIFIFI so he can rethink this bullshit idea that loud music and fast cuts makes a heist more exciting.

There’s a couple touches that aren’t quite generic. The bad guy who looks like Gollum wants the money to treat some kind of palsy he suffers from, so he always has the shakes. This adds some extra tension any time he’s holding a gun, you don’t know if he’s gonna shoot somebody or himself in the balls on accident. Also, Wesley completely trashes the cop’s car in the first car chase, and she actually drives it in that condition for the rest of the movie. I don’t remember seeing that one before.

The thing that makes the movie watchable though is Wesley. He doesn’t get as good of a character as Blade obviously (he talks more, is all) but he’s got a couple good lines, a couple good fights, and the usual charm. He gets some good maneuvers in there, like attacking a guy that’s pissing in the woods, and dragging him across his own puddle. (Well, I guess that’s better than somebody else’s puddle.) Also I like the part where he beats a guy unconscious, then casually sits on top of him while he catches his breath.

By the way, if you’re wondering why it’s called 7 SECONDS, I got no clue either.

In BLADE PART THREE there’s a scene where Blade is captured, drugged, and shackled in a chair. Wesley is great in this scene because the whole time he’s being questioned his eyes are moving around the room, examining every nook and cranny. And because you know this is fucking Blade you know that he’s taking in all the information he needs for a badass Houdini type escape. He’s painted into a corner, there’s nothing he can do… so you fucking KNOW he’s gonna do it…

And then some smartass kid busts in and rescues him. Oh well.

In UNSTOPPABLE, Wesley found himself in the same situation. Captured, drugged, shackled to a chair, getting a second chance to do this shit. To show what he’s made of. You can’t shackle Wesley Snipes to a chair, man. Because what he’ll do, he’ll… well, this time his girlfriend saves him.

In 7 SECONDS, what do you know, there he is again, captured/drugged/chaired. And I’m watching this thinking, no fucking way Wesley. You’re not gonna let me down three times in a row. What this time, a dog is gonna bring you the key? A little kid will come in and do karate on these guys? Maybe instead of getting rescued, they’ll just feel sorry for you and let you go. Let bygones be bygones. I was nervous.

Well, he doesn’t mount an escape from the chair. But he convinces them that they need him to lead them to the locker where he has the painting. And then – god damn it, are my eyes deceiving me? – he actually escapes! In fact, he literally fights two guys with his hands tied behind his back! This is progress, Wesley Snipes!

I guess you could say that’s where Wesley’s career is right now – drugged and tied to that chair. And he’s got two ways out. He can sit there and wait to be rescued by kids and girls like Blade 3, or he can take his destiny into his hands and escape, like Blade 1 or 2 would do. Or Nino Brown, or the cop from KING OF NEW YORK, although I think he just gets shot and dies in that one, so that’s a bad example. But you know what I’m saying. Wesley Snipes deserves the big screen. And he’s perfectly capable of taking it back.

DTV Simon Fellows Wesley Snipes
This entry was posted on Sunday, May 8th, 2005 at 6:15 am and is filed under Action, AICN, Crime, Reviews, Thriller. You can follow any responses to this entry through the RSS 2.0 feed. You can skip to the end and leave a response. Pinging is currently not allowed.