I’m including this as part of Slasher Search ’11 because that’s why I rented it. But it turned out I was wrong, it’s more of a ghost or haunted house type movie.

The opening ten minutes or so really leave you guessing what the hell this movie’s gonna be about. It starts on a plantation in 1800s Virginia, something about some slaves giving a stone mask to the slave master’s wife to protect her from a curse that some guys they keep cutting to on the Ivory Coast are working up. Then we go to modern day (well, 1980s) Virginia, where the house still exists, and a lady is filming a music video, and a psychiatrist is dealing with crazed patients in an asylum. How does this all tie together? Not well.

Kate (Mary Page Keller) is an on-the-verge-of-superstardom pop singer. She has one son, she’s had some sort of mental issues in the recent past (like the gal in THE CARPENTER!) and she’s dating her former doctor, David (Andrew Stevens, BLACK DAWN), the guy from the asylum. Just like in THE CARPENTER and DON’T BE AFRAID OF THE DARK and HELLRAISER and POLTERGEIST (and alot of other horror movies) they’re moving into a new house full of old, horrible, supernatural secrets that will be uncovered by a curious female. And I guess the son helps. 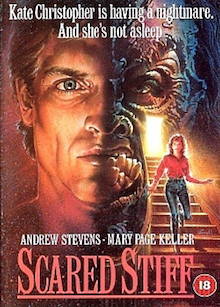 Weird things start happening, for example all of the toys in the kid’s sandbox come to life for a little animated sequence of vehicles driving around. Kate starts seeing visions from the past. She finds half of the stone mask, which is not enough to protect her from the curse, but she doesn’t know about the curse yet. Also they find two rotted dead bodies in a trunk in the attic. That’s kinda weird.

The boyfriend tries to look into the history of the place to figure out what’s up with the dead bodies (the cops don’t really care about the bodies because they’re old). He oughta know something weird is going on here, but as a doctor he thinks his girl is having a mental episode when she tells him about these visions. At one point he forcibly sedates her and uses way too much, a sloppy, somewhat understandable mistake. But before we can really get into the ethical dilemma of a doctor treating his own girlfriend he becomes possessed by the ghost of the slave master, and then it doesn’t really matter. He’s just a monster dude that scares you stiff or whatever.

I’d have to say the silliest part is when Wally the friendly house painter is on a ladder that suddenly breaks because of the curse and/or pigeons, and for some reason he has a bunch of rope tied around his neck at the time so he falls and hangs himself. That’s goofy enough but then nobody notices him hanging there, even though a large group of police officers and medics shows up right afterwards to remove the trunk of human remains from the attic. The next night the kid complains that something smells funny and mom looks out the window. Neither of them see Wally hanging there even though his head is about two feet in front of them in plain sight. They don’t end up discovering him until something causes the body to actually swing and bust through the window what must be at least a week later.

I’m not sure why she has to be a singer. She’s never recognized as a famous person, so that’s not important to the plot. There’s one mention of signing an autograph for the kid’s teacher. They tie it in loosely by having her video take place in the 1800s so that Doctor Boyfriend thinks that period is on her mind and that’s why she’s having these visions. Also there are some times when she sees a guy playing a piano and that ties in to her song or something. But mostly it seems like they just wanted to have a bunch of long scenes of her lip synching a song that I’m sure wasn’t that good at the time and now is very dated. And it plays again on the end credits. The lyrics might be intended to say something about the plot, because they say something about her being “a little white girl in a little white world” or something like that.

That’s the weird thing, it seems like this movie is gonna deal with race, but if it does I missed it. The opening scene got me excited, because you’ve got this plantation owner and his slaves, and Africans on the Ivory Coast doing a curse, I thought it was gonna be one of the only American movies besides (British-directed) CANDYMAN and BLACULA to use horror to comment on the darkest part of our country’s history. Honestly I’m not sure what they’re trying to do with the racial politics here. After that opening scene almost all of the characters are white, and there’s no mention of race. The only black character, the police detective, ends up dying in a fiery explosion after being startled by a ghoul in his back seat and flipping the car. I guess maybe the African curse was only designed to get at this one particular plantation owner and not to address the larger problem of slavery throughout the country or its legacy hundreds of years later. Not to be a dick, but I’ve seen better curses. This one is lacking.

And what to make of the kid’s lamp with the cartoonish Indian Chief head it uses as its base? Is this a way to bring up another shameful piece of America’s historical foundation? What were they trying to say with that? Unfortunately they probly weren’t trying to say anything at all, they were just putting random shit into a movie without thinking about it or thinking that people watching it would think maybe they were supposed to think about it.

I don’t know, all I know is that I kept noticing that hideous lamp in the background and then when mother and son are about to flee the house because possessed future step dad is about to come home and kill them, the kid suddenly cries “What about Cochise!?” and runs back upstairs for his fucking lamp. Like a photo album during a fire. I remember when TOY STORY 3 came out somebody was complaining that the girl character “Bo Peep” wasn’t in it and I said that’s because why would they donate a lamp to be played with at a pre-school? No kid gives a shit about a lamp. But maybe these filmatists disagree. Lamps are a fun toy that kids love.

Although it’s not a slasher movie I do think it was heavily influenced by the A NIGHTMARE ON ELM STREET series. I mean, you can see it on the poster there. The climax of the movie takes place in what could be one of Freddy’s dream worlds, a surreal place where dead people harass you, halls go on forever, doors open to other time periods and things from people’s lives (a piano, a giant Cochise) come flying at them. The ghost of the plantation owner shows up and grows a monster head based on the style of African wooden masks.

Like the Freddy pictures there’s a bunch of really elaborate, gooey latex effects. A couple of them (like the talking puppet version of the hanging house painter) have a cartoonish look that reminds me of BEETLEJUICE or the early Peter Jackson stuff.

I recognized the name of production designer Wynn Thomas, so I looked him up. Turns out he had just done SHE’S GOTTA HAVE IT before this, so he stuck with Spike Lee and ended up doing DO THE RIGHT THING, MALCOLM X and others. Also MARS ATTACKS!, although in my opinion that one is not by Spike Lee.

One of the credited writers is Mark Frost, co-creator of Twin Peaks and On the Air with David Lynch. He also worked on the FANTASTIC FOUR movies though, so don’t get too excited. The other credited writers are Daniel F. Bacaner (whose only other IMDb credit is as executive producer of BLOOD SIMPLE) and director Richard Friedman (PHANTOM OF THE MALL: ERIC’S REVENGE, episodes of Baywatch Nights, etc.)

Andrew Stevens Mark Frost Mary Page Keller Slasher Search
This entry was posted on Saturday, October 29th, 2011 at 10:12 pm and is filed under Horror, Reviews. You can follow any responses to this entry through the RSS 2.0 feed. You can skip to the end and leave a response. Pinging is currently not allowed.