SOLOMON KANE (James Purefoy) is a cruel bastard of a treasure hunter. I’d say he’s like a meaner Indiana Jones except in the opening scene I honestly thought he was the bad guy. He fights his way into some kind of ancient temple and even kills demons that pop out of the mirrors. But then he gets locked in a chamber with a flaming-sword-wielding-gentleman who introduces himself as “The Devil’s Reaper.” And this is when Solomon Kane realizes he’s reached rock bottom. For Richard Pryor it was running down the street on fire, alot of guys it’s waking up with no pants in an unfamiliar backyard, crawling home with no keys, having to break in, only to discover the place trashed and the wife’s closet empty, things like that. This guy it’s when the Devil’s Reaper shows up and tries to literally drag him to Hell. 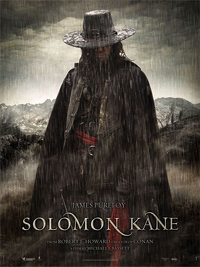 But he says you know what pal, I’m not ready for eternal damnation yet, and please tell the Devil to go eat a dick. Well, mainly the first part. But I’m sure later he was saying to his friends Man, I should’ve been like, ‘Give my regards to Satan. And by regards I mean tell him to go fuck himself.’ That would’ve been awesome.

Anyway he manages to escape and unlike alot of us would he doesn’t just brush it off and go back to his old ways. This is a life-changing incident for Mr. Kane. He really does quit the life, goes and finds sanctuary at a monestary, becomes real pious and all that. Possibly dabbles in Christian rock, I’m not sure. He’s definitely on the self-righteous side, but I don’t think he hassles too many people about it or gets preachy. I guess the one exception would be later on when an old lady saves his ass using magic and he says, “Keep your filthy pagan magic away from me!” Not cool, Solomon. Have some manners.

But you know how it is, the Abbott has a dream that causes him to throw Solomon out on his ass. Turns out Solomon actually comes from a rich family so the Abbott didn’t feel bad telling him to go home. It’s a nice home.

On his way home Solomon gets attacked by some thieves. He tells them “I have renounced violence,” but unfortunately their response is, “Oh, that’s a shame. Because we ‘aven’t.” When he regains consciousness he’s been rescued by a family who are Puritans like him. So they hang out and do Puritan stuff. Well, they come along too late to see a witch burning, that would’ve been a nice way to spend time together. They basically come across the site of a massacre and this kid there tells them that they tried to burn a witch but the fire didn’t burn her and she burned out the eyes of all the people who came to watch her die.

Now, I know this is a fictional fantasy movie and all, and I don’t mean to be “politically” “in” “correct,” but I gotta mention something here. In my opinion there is actually no such thing as magical witches, and yet it is a historical fact that many innocent women were horribly executed by superstitious knuckleheads like this. So making a movie where they were actually correct to try to burn a witch seems like a little bit of the ol’ poor taste. In a way it’s sort of validating those nuts by depicting a world where sometimes it’s actually a good idea to burn women alive. And I’m not gonna start a picket line or anything because you’re right, alot of time has passed. But we still got countries where the men stone women to death. Which I’m against. I mean, how far is this really from a fantasy world where Jews really were out to ruin German society? If there was a movie like that and I mentioned that made me a little uncomfortable nobody would say, “Oh, come on, it’s a fantasy! It’s not supposed to be real.” So I gotta admit this witch thing made me a little uncomfortable. I hope that’s the idea.

Outlawvern.com is proud to be 100% against witch burning. Thank you.

Anyway, Solomon Kane is on this road trip to stately Kane manor or whatever, he encounters evil witches and also an army of weird veiny-headed orc dudes. These guys are led by a villain that Wikipedia calls “The Masked Rider” but I never caught them calling him that in the movie. I figured he would be called “The Masked Head-Squoosher.” This is because he likes to put his hands on potential disciples and squeeze their puny skulls until you would think their eyeballs would pop out FRIDAY THE 13TH 3-D style, but instead their heads turn monstrous and they get an orgasmic feeling that makes them yell, “It’s gooooooood!”

So these guys attack Solomon’s friends and this is where I question the movie’s morals again because this is a long scene where the Puritans are screaming for Solomon to “do something!,” and by their tone it’s very clear that what they mean is “Solomon, you have no balls and are less than a man unless you immediately toss out everything you believe in and condemn your soul to Hell by committing violence!” Which is not all that Puritan of an idea, in my opinion. Or am I confusing them with Quakers? I don’t know, maybe they’re into that, I won’t speak for them.

Anyway I didn’t think they were being fair to Solomon, but I guess he can handle it, he can make his own decisions. If he ditches his morals and uses violence he faces eternal damnation. And he decides it’s worth it: “If I kill you I am bound for Hell. It is a price I’ll gladly pay.”

As religion it’s horse shit, but as badass cinema it’s pretty good. He has a choice between not kicking ass and not going to Hell. He decides he’s more dedicated to the kicking of ass than to the not going to Hell. It’s kind of a when in Rome situation too because just doing a little violence means he’s strayed from the path of peace and Satan is gonna get him, so if he’s gonna do it at all he might as well go all out. And also he might as well wear a pilgrim hat while doing it. Good choice.

Well, the Masked Head-Squoosher kidnaps the daughter of Solomon’s host family, so the father (Pete Postlethwaite) declares (and I’m really not sure how we know he’s properly authorized to declare this) that Solomon’s soul will be saved if he goes and rescues this poor girl. So there’s his mission, he goes after her, but please note that he was already headed there anyway, because it turns out Head-Squoosher’s boss Malachi now lives in Solomon’s ancestral home.

Poor Solomon gets crucified for defying Malachi. Sound familiar? Hint: There was a certain religious figure who was also nailed to a cross. Answer: Jesus, from Christianity. What Solomon Kane does that Jesus doesn’t is tear himself off the nails and escape. Does this mean that Solomon Kane is more manly than Jesus? Yes, kind of. But Solomon Kane is just a guy you don’t fuck with, he’s not the son of God. Jesus could’ve done that if he wanted to. I know that’s easy to say, but it’s true. Jesus also chose not to wear a pilgrim hat. These are the decisions we must all make for ourselves when we are crucified.

I think this is a pretty good movie. I actually like that it has the sort of questionable ideas I mentioned. It’s provocative, it pushes buttons, makes it less boring. It’s something to think about but not offensively pushing it in your face like it thinks you’re an asshole if you disagree with it. Solomon Kane is very religious, but not evangelical. And at no point does he drive around in a bus with a giant billboard on the side promising an end to the world in 2011, like the row of buses I saw parked outside of Key Arena the other day during what was billed as an “entertaining and non-threatening” evangelical gathering.

I definitely don’t think anybody would take this for promoting a Crusades type of mentality of trying to convert or kill the other religions. It’s just a guy who has his strong moral beliefs (based on actual demon fighting experience) but seems to be destined to still get into sword fights all the time. I have always said that my favorite type of ass kicker is the Billy Jack or William Munny kind, the kind that doesn’t believe in violence but decides he has to do it anyway. The action movie that can both have and eat cake, because in my opinion alot of us like cake and therefore it is good to be able to eat cake while also maintaining possession of said cake.

So I enjoyed the character and the story, but to be honest I didn’t get as into it as I hoped. To me James Purefoy as Solomon Kane and his adventures were not as involving as my go-to example of an enjoyable non-Asian modern fantasy adventure, WOLFHOUND. Nothing against Purefoy, but he doesn’t have the type of screen presence or charisma that makes a character like this jump off the screen. He just seems like another gloomy longhair in a period piece. And this is a humorless character, he’s not exactly a fun guy to be around, so he really could use some kind of scorching intensity or something to make you not want to take your eyes off him, and to make you forget that he looks pretty similar to Hugh Jackman in VAN HELSING.

But it’s got some good ideas, the religious subject matter makes it stand out from other stories of this type, the evil mask guy is cool, there’s a cool fire monster dude that he fights at the end. The character was created by Robert E. Howard, the same guy who created Conan, and who was played by Vincent D’nofrio in that movie. The director is Michael J. Bassett, who did a movie called DEATHWATCH that I heard was good and soon will be doing SILENT HILL: REVELATION 3D.

adventure James Purefoy Michael J. Bassett Robert E. Howard
This entry was posted on Thursday, November 11th, 2010 at 12:48 pm and is filed under Fantasy/Swords, Reviews. You can follow any responses to this entry through the RSS 2.0 feed. You can skip to the end and leave a response. Pinging is currently not allowed.