I would’ve been even more skeptical if I had read up on it before seeing it, because I would’ve known it was written originally as a TV show by reality show producers trying to cash in on the “fast zombie” love during that couple weeks after the DAWN OF THE DEAD remake came out. It’s two writers and one of them says he’d only seen a couple zombie movies before (didn’t specify which ones), the other one had only seen SHAUN OF THE DEAD. And the director isn’t big on them either and had only done commercials before.

Plus the title is kind of cheesy, I don’t know why, I just don’t like it.

And not just that! The main character Columbus (Jesse Eisenberg) has a numbered list of rules he always talks about, just like I hated in TRANSPORTER. And these ones are cuter because they appear as text on the screen whenever they’re mentioned.

But you know what, I have some rules of my own, tenets I believe in, and one is that Woody Harrelson is always pretty good, even when he’s in crap. Plus the projector was broken for the movie I came to see, so I switched my ticket for this one. 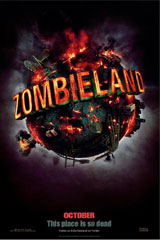 And I’ll be damned, I actually enjoyed it. Eisenberg (from ADVENTURELAND and SQUID AND THE WHALELAND) plays the neurotic nerd and narrator who shares the aforementioned rules to explain how being a socially inept dork has kept him alive so far during the zombie apocalypse. For some reason I enjoyed them, including some of the gimmicks where, say, somebody pulls a muscle and the previously mentioned rule “Limber up” floats by in the background. Or when you notice he has new, higher numbered rules inspired by mistakes he’s made since starting to tell us these rules.

One day traveling through the vehicle graveyard of the interstate Columbus runs into Tallahassee (Harrelson), who has survived because he’s a badass and has an Escalade with a bulldozer attachment on the front. They decide to stick together for a while and then they meet two sisters, Emma Stone and Amber Breslin, and that’s just about it for the non-zombie cast of the movie.

There’s some decent zombie mayhem. The opening credits are a Zack Snyder-esque montage of super-slo-mo ghoul attacks. My favorite is the little girls from a birthday party hanging on the back of mom’s Beanie-Baby-filled minivan. It gets gorey and vicious at times. The first time Columbus has a girl in his apartment he offers her Teddy Grahams and soon after has to hit her twice in the head with a toilet lid. Also there’s some good amusement park ride vs. zombie action. I always figured in case of zombie apocalypse I’d head for an amusement park island somewhere. These guys didn’t do an island but they figured out what never occurred to me – that rides have alot of potential for killing the undead. Spinning around firing machine guns in crowds, landing on top of them, catapulting them.

But if that’s all it was it wouldn’t be that good of a movie. The good thing is it’s more about the characters and surviving in a dead world than it is about zombies. And it’s kind of an odd couple road movie. Harrelson and Eisenberg are funny opposites traveling together in a postapocalyptic world where you don’t see living people very often and even a scrawny geek knows all about blowing heads off. The best part of zombie movies since DAWN OF THE DEAD (original) has always been the scavenging, and this movie knows that. You gotta appreciate Harrelson’s excitement at seeing the Hostess logo on an abandoned truck. I mean, that really would be a fuckin jackpot in this world. Also, the Hummer full of assault rifles that makes him say “Thank the Lord for rednecks!”

So the people who made it apparently aren’t horror fans, but it doesn’t matter because they seem to get it. We don’t need a bunch of homages to other movies anyway. The smartest move I think (one that even the horror initiated tend to get wrong) is not explaining the zombies, or how it began, or trying to find a cure. There are a few flashbacks to show how the characters first encountered zombies, but the movie begins and ends in a world gone to shit, just like DAWN OF THE DEAD (still original). And despite goofy situations the zombie stuff is treated straight, moreso than SHAUN OF THE DEAD. It’s definitely a comedy, but in a credible horror world, almost like this could be happening somewhere else during DAWN OF THE DEAD (remake this time). One exception is the Looney Tunes way some lady offs a ghoul in the “Zombie Kill of the Week” gag that was in the trailer. I didn’t like that, but I was impressed when I learned the TV show version really would’ve had a ZKOTW each episode. For that it would’ve made sense.

It’s probly too late for this, but if you plan to see the movie you better avoid all further reviews, articles, and wiseguys. There’s a not-crucial-but-very-enjoyable aspect to the movie that most reviewers have been shamefully spoiling by pretending that if they give away the basics but not the specifics there’s some kind of a loophole where it doesn’t count as carelessly taking away somebody’s enjoyment of it. I managed to miss those reviews but had it spoiled by somebody complaining about the reviews. I won’t say anymore, just be careful. And close those loopholes, writers.

There are alot of great zombie movies. Obviously the first three Romero ones are some of my favorite movies of any genre, nothing unusual about that (okay, the third one is more controversial, but still). RETURN OF THE LIVING DEAD is also a masterpiece in my mind. LAND OF THE DEAD I enjoy, and the DAWN OF THE DEAD remake is fun. Fulci’s ZOMBIE is pretty cool. And the “Thriller” video of course. And there are other ones that might qualify.

As a movie nerd in your 20s or whatever it is natural and beautiful to be drawn to these movies. But just be quiet about it though, okay fella? We get it. We all get it. It’s like a samurai doesn’t need to make a promise, because it goes without saying that he will keep his word.  Or like a dog doesn’t have to say he sniffs butts. A movie nerd doesn’t need to say that he likes zombie movies. It’s a given.

These movies are great, so I don’t blame young upcoming filmatists for wanting to pay tribute to them ten years ago. Unfortunately, about 250 people got the idea at the same time. Now we’re done with that, we’ve been done for a long time. Zombie movies don’t need a reinvention – Romero reinvented them so well nobody remembers the “re” and just figures he invented it. I don’t buy that anybody is gonna come up with a better take than him, or do it as well as him. A few years ago I said everybody had to stop making zombie movies except Romero, and then even he violated my trust with DIARY OF THE DEAD. It’s too late to stop him, he already has another one finished, so we’ll see if he earns his priveleges back or not. And I’ll give a provisional license to that one Zack Snyder is supposed to produce where a team of mercenaries goes into a walled off zombie Las Vegas to rob a casino. That sounds like a good one. But for everybody else zombies is a no-fly zone for a 10 year probationary period. And that could very well get extended. Most likely will.

ZOMBIELAND beat the odds. It’s a fun movie, much better than I expected, and that’s always nice. Especially in a case like this, where it is the very last zombie comedy that will be made. It’s cool that the final time that this topic is covered was a good one. The whole “funny zombies” thing goes out on a high note, and we can all look back on it fondly, instead of grumbling about how lame it is that motherfuckers still think they should keep coming up with new ideas for zombie movies. The status quo is never restored in Zombieland, but it’s still a happy ending.

Emma Stone horror comedies Jesse Eisenberg Woody Harrelson zombies
This entry was posted on Friday, October 9th, 2009 at 6:34 pm and is filed under Comedy/Laffs, Horror, Reviews. You can follow any responses to this entry through the RSS 2.0 feed. You can skip to the end and leave a response. Pinging is currently not allowed.