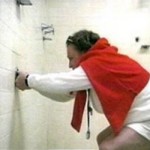 Even though he’s a zombie, he’s also a metaphor for people who survive war. They come back changed and nobody knows what to do to help them. Andy doesn’t get his hand in a garbage disposal like in ROLLING THUNDER, he doesn’t get bullied by the sherriff for being a longhair like in FIRST BLOOD, he doesn’t get spit on by protesters like in the urban legends. On the surface people treat him real good, like a great hero, but they just don’t understand him. They don’t even try.

At first the family thinks it’s a miracle, the state department made a mistake. But it’s immediately clear that their son has come back different. He barely talks, he stares off into nothingness, he smiles worse than Dick Cheney, he strangles a dog in front of a bunch of little kids. Also he’s been going around killing people, draining their blood and shooting it up (a little vietnam drug reference for you there). And then he starts to rot. Andy never had maggots crawling out of him before Vietnam.

But nobody seems to notice that Andy is different, or at least they don’t want to admit it. They welcome him home and ask him questions and then answer them for themselves and don’t notice that he’s not talking to them and maybe not listening. They tell him anecdotes about world war 2 and act like they’re his buddy and don’t notice that they aren’t connecting with him on any level, or that he literally doesn’t have a soul. Or a pulse either.

The feel is alot like a play or a movie from an earlier era, with some very dialogue heavy scenes and a little too much jokey dialogue from the various characters in the neighborhood (like the wacky mailman who talks to their dog).

The cast is good: the mother in denial, the pretty, scared sister and the dad who looks exactly like Magneto reborn as a small town american dad. And especially the guy who plays Andy. He kind of reminds me of the kid who stars in MARTIN, but his character is much more distant and emotionless.

It’s not incredibly gorey, but it’s Tom Savini’s first movie. He gets the credit for the makeup anyway, but according to the extras on the DVD he was pretty much an assistant for Alan Ormsby (who also wrote the movie). Savini was a combat photographer in Vietnam, so I wonder what he thought about doing this movie?

The movie has a bunch of different titles, like DEAD OF NIGHT and THE NIGHT ANDY CAME HOME and I guess it was written as THE VETERAN. None of these titles are any good, including DEATHDREAM, and I bet that’s why it’s not a very well known movie. I mean come on dude, DEATHDREAM? Let’s get real here boys.

The director is Bob Clark, who also did the fucked up but very funny Ed Gein movie DERANGED (also with Ormsby and Savini). This guy made some good (if ugly) movies for a while, then he got famous for PORKY’S and CHRISTMAS STORY and then, I don’t know, details are sketchy but I’m figuring at some point he must’ve gone off to a war and came back traumatized. Because he does BABY GENIUSES movies now. Also something called THE KARATE DOG. But still, DEATHDREAM’s worth seeing. Give the guy a break. Maybe he’s doing garbage now but he’s got his bases covered because he made this movie back in 1974 that’s very relevant today. And who knows, maybe 30 years from now we’ll be saying the same thing about BABY GENIUSES 2: SUPERBABIES.

Alan Ormsby Bob Clark zombies
This entry was posted on Thursday, October 14th, 2004 at 6:37 am and is filed under Horror, Reviews, War. You can follow any responses to this entry through the RSS 2.0 feed. You can leave a response, or trackback from your own site.

One Response to “Deathdream”