After catching up with NIGHT OF THE CREEPS I knew I had to see director Fred Dekker’s second movie that I’d always avoided. You know, he’s one of those directors who wears his horror nerd-dom on his sleeve, and some members of the internet community have too much loyalty to guys like that. There’s this whole “he’s one of us!” idea where if they swear they love some comic book or something that proves they’ll do a good job of making a movie. But of course, we all know ten guys who love that comic book who we wouldn’t trust to return a movie to the video store on time, let alone direct one.

So I was always skeptical about that claim with Fred Dekker. ROBOCOP 3 did not seem like the work of a born director. But it turns out it was – his first two movies are real gems. Two against one. 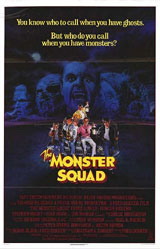 MONSTER SQUAD is another horror comedy, but this time from a younger kid’s perspective, like around 12 years old and younger. Dracula, Frankenstein’s monster, the mummy, the wolfman and the creature all show up in a small town because Dracula’s bent on destroying the amulet that can kill him once every 100 years (tomorrow). Only a bunch of kids know about it and can stop them. So it’s very similar to GOONIES, although Dekker conceived it as The Little Rascals meet the Universal Monsters.

I liked it better than last time I saw GOONIES, because these kids don’t scream and whine as much as the Goonies and the jokes are funnier. Dekker wrote the script with Shane Black, which explains all the funny quips (including smartass cop banter, because the main kid’s dad is a cop) and jokes like the little girl who thinks we’re at war with Vietnam. “It’s in RAMBO,” she explains. There’s a definite Shane Black wiseass feel to this thing, with two main characters known mainly as descriptions: “Fat Kid” and “Scary German Guy.” Even their friends call them that.

Like NIGHT OF THE CREEPS the comedy is grounded with messy relationships. The kids’ parents are fighting all the time, but the kids don’t seem to notice because they’re preoccupied with kid things and monsters. There are some great father-son and mother-daughter moments where they try not to let the fighting get to the kids, and maybe get a little relief by spending that brief time with their child. It’s such a goofy movie but with surprising humanity.

But more importantly it has surprising monsterity. A kids movie with Dracula, Frankenstein, etc. teaming up? What are the chances they’re gonna treat the monsters with respect? Well here they do. Yeah, it’s Dracula in a cape, but they don’t make a joke out of him, they treat him as a serious threat. And the movie is drenched with atmosphere, that surprised me. I never guessed a movie called MONSTER SQUAD would be shot this beautifully. You know how you can tell Dekker is a serious Dracula fan and not casual? Because an armadillo runs by in Dracula’s castle.

The way they handle the wolfman is a good example of how credible the monsters are. After a protracted battle one of the kids shoots the wolf with a silver bullt. He morphs back into his human form, laying on the ground pathetically dying. And I thought, “Oh shit, this poor kid just murdered a human being in cold blood, he’s gonna have to live with it for the rest of his life.” And then the human-wolfman looks at the kid all teary eyed but he doesn’t say, “Why?” He says “Thank you.” It’s so perfect because it’s a relief, it makes the death less horrible, but it’s also a tribute to the tragic nature of the original Universal wolfman. They got it just right.

The makeup by Stan Winston is great. It’s not a Universal movie so they couldn’t use the same looks as the Universal movies, but they are able to capture some of their qualities while putting their own spin on it. The mummy is my favorite. I’m not really a fan of mummy movies, but in this one he’s the best looking monster. I also gotta give props to the creature from the unnamed, uncopyrighted lagoon. And I’m sure somebody has pointed this out before, but holy shit, him and the Predator could be cousins! Check it out:

But the best character is definitely Frankenstein’s monster. I guess that’s another way it’s like GOONIES because they have their deformed giant friend Sloth in that one. Here Frankenstein’s monster is sent to kill the kids, and there’s an homage to the famous scene where the monster finds the little girl throwing flowers in the water and tries to play along by throwing the girl and killing her. But here it cuts away before any throwing occurs, and the next thing you know she’s dragging him around like he’s a puppy she found. And she figures now she should be allowed into the boys’ monster club. The monster becomes a member too, not through any choice to do the right thing but just because he relates to them and doesn’t know any worse. I guess even in our dead flesh it’s natural to be nice.

I’m happy to report that MONSTER SQUAD is one of the good kiddie movies. I can see how it’s a big nostalgia thing for people who saw it growing up, especially people who grew up into horror fans. It’s all a big tribute to the world of the budding horror fan: obsession with monsters, kids trying to see a slasher series called GROUNDHOG DAY, a kid wearing a shirt that just says “Stephen King rules.” There aren’t that many movies that speak to that kind of kid, so if that was you growing up this makes perfect sense as a sentimental favorite. But lucky for me it’s also good enough to work on me too.

I have to say though, after hearing the quote a thousand times over the years I thought the wolfman was actually gonna have “nards” hanging out. No, he wears pants for the whole movie. Fuckin Hollywood always playin it safe. Total ripoff.

Fred Dekker horror comedies Shane Black
This entry was posted on Wednesday, November 4th, 2009 at 12:54 pm and is filed under Comedy/Laffs, Horror, Reviews. You can follow any responses to this entry through the RSS 2.0 feed. You can skip to the end and leave a response. Pinging is currently not allowed.