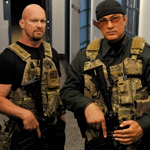 The good news is that Seagal and Austin play buddies on the same team, the “operations genius” and the “weapons expert, a bulldozer on the ground,” respectively. The bad news is that in their first scene together they obviously shot separately with back-of-the-head doubles for each other. They’re security contractors hired to decommission a “black site” military prison, but they can’t leave until they get six prisoners transferred out of there, plus there’s this problem with a garbage truck not working. Looks like it’s gonna be a long night.

Now, if you were using a garbage truck to sneak soldiers into a prison to extract a prisoner, would you create a logo that says “Troy Disposal Company” with a picture of a Trojan horse? Because personally I wouldn’t, but these guys got balls, and since Stone Cold doesn’t catch on I guess we can’t sweat the technique. Suddenly Michael Pare is inside leading a team of heavily armed, highly trained mercenaries trying to get the two female prisoners Cross (Seagal) brought in. Luckily Cross already found a secret code that said something was going down so he went to a bar and got a bunch of guys. 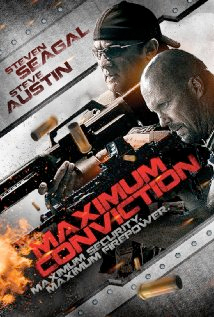 So it’s kind of a low rent DIE HARD, or dare I say UNDER SIEGE type of situation where they’re in the enclosed space of the prison sneaking around shooting guys, getting in fights. Cross and Manning (Austin) are separated for most of the movie, it’s actually kind of a less extreme version of what Seagal did in my least favorite of his movies, AGAINST THE DARK. There are long stretches where he’s not on screen at all, and we just gotta assume he’s walking around carefully pointing his gun in all directions, ready to shoot in short controlled bursts or do some cool military hand signals at any moment. So this isn’t as much a team-up as a way for two full-timers to work part time. Shoot half a movie, go see their kids.

Austin gets more action, for example a kitchen fight where he lights a guy on fire and dumps boiling water on a guy. He gets shanghaied by a woman and says “Well shit, that’s my kinda woman.” He gets to impale a guy on weight lifting equipment, say a line almost worthy of Arnold and then exit in triumphant slo-mo.

Seagal does get a few moments. He performs a painful arm-snapping like in the old days and then asks the guy, “Did that hurt? You fuckin pussy.” He gets to talk in his usual way, with alot of “Y’hear?” and “We cool?” and “All right.” I like the part where he’s outnumbered but he tells Pare, “It ain’t the amount, it’s the skill. The skill the guy’s got, that’s what it is.”

There are two unfulfilled promises. One, Cross knows there’s a possibility that one of the female prisoners is with the attackers, and he tells her that if he finds out she is he’s going to kill her. That would be unusual for him to kill a woman. Doesn’t happen. The second one is an out of control prisoner in a pretty good pre-Trojan horse scene. Seagal beats the shit out of the guy and the guy threatens to get him later. Sure enough the guy gets released from his cell during the mayhem… and attacks the women. Never sees Cross again.

Pare is a good villain. He has kind of a Tom Berenger thing going these days, and honestly it’s rare that the lead villain in one of these has as much screen presence as him. For a while he just stands around giving commands, but at the end he has a good showdown with Cross that of course includes the dialogue “We got alot in common, you and I. Special forces, black ops, CIA…” He makes a good speech.

Cross says that he was never in special forces, he was a marine. That’s an uncommon one for Seagal characters, specifically denying being in special forces. He seems to come alive in this scene, getting to throw in the Seagalogical shit he likes. He says, “You talk about being a warrior. How does a warrior break his word of honor?” At the end he has some money that he says he’s gonna donate half to St. Jude’s of Memphis (apparently one of the children’s hospitals Seagal visits and donates to).

Pare makes reference to the story of the scorpion and the frog. He doesn’t say, “Did you see that movie DRIVE?” but he doesn’t really explain the story so they must know it’s in that movie and that’s why they expect us to know it. Unless they somehow know we saw WRONG TURN AT TAHOE.

I have to say I’m a little confused here because in this Seagal plays “Cross,” but I also recently saw THE BOURNE LEGACY, where Jeremy Renner plays “Aaron Cross,” and I want to see that movie ALEX CROSS where Tyler Perry plays “Alex Cross,” and I had a screener for another movie I didn’t watch called CROSS but I just looked it up and Brian Austin Green doesn’t play a Cross in that, he just owns a magic cross. Still, I guess the Cross surname is pretty big this season, huh? Later on when you see a movie with a Cross in it you’re gonna think, “jeez, this is such a 2012 throwback.”

The director is Keoni Waxman, who did the competent Seagal films THE KEEPER, A DANGEROUS MAN and many episodes of True Justice. He also did Austin’s HUNT TO KILL, which I’d guess is how this casting happened. Writer Richard Beattie has done some Shannon Tweed movies and shit: COLD SWEAT, NO CONTEST II, also PROM NIGHT IV and some True Justice. Filmatistically MAXIMUM CONVICTION is pretty weak, with the camera wagging around handheld during some of the fights, computer bleeping on the credits and titles, and the annoying innovation of Security Cam Avid Farts.

But like I said I had low expectations, and although obviously I’d like to see better from these two titans of DTV action I honestly thought it would be alot worse. You get a small sampler of their appeal. It’s watchable enough.

DTV Keoni Waxman Michael Pare Seagalogy Steven Seagal Stone Cold Steve Austin
This entry was posted on Monday, December 17th, 2012 at 1:34 am and is filed under Action, Reviews, Seagal. You can follow any responses to this entry through the RSS 2.0 feed. You can skip to the end and leave a response. Pinging is currently not allowed.