What I’m trying to admit to you, my friends, is that I like Cuba Gooding Jr. I think he’s good. I might even start watching other movies just based on him being in them. I’m sorry. I want to be totally honest with you.

The other thing is, I saw that movie P2, where the pretty gal from the first GI JOE movie gets trapped in a parking garage on Christmas Eve and terrorized by Wes Bentley. I really liked that movie, and was surprised that the same director, Franck Khalfoun, did that TAHOE movie I made fun of. And now he’s doing the not-necessary-but-potentially-interesting remake of MANIAC, so I’m wondering about his skills. So I finally gave in. 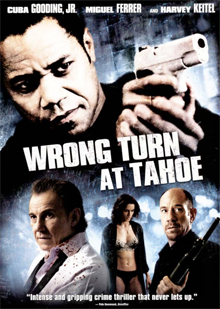 WRONG TURN AT TAHOE is a crime thriller in the we-saw-Tarantino’s-movies-before-we-wrote-this type of genre. It is not affiliated with the WRONG TURN series as far as I can tell. Or if it is then the inbred cannibal aspects are pretty subtle.

Joshua doesn’t seem to think much of it, but feels a responsibility to tell his boss just in case it’s true. You don’t want to be the guy who knew about 9-11 and didn’t say anything. Unfortunately, Vincent has been kind of losing his shit lately, going a little overboard on everybody, so when he tracks down this Tahoe chump at a strip club he beats him to death with a baseball bat in front of witnesses. And he doesn’t take into account that the guy is considered important to a much bigger fish in the criminal world, Nino (Harvey Keitel). So this gets our boys into some trouble.

You see, it was not a wrong turn at the lake in California, it was a metaphorical wrong turn by killing this guy. I’m not sure where it’s supposed to take place, but it was actually filmed in Spokane, Washington, same place as HIT LIST and SURVIVING THE GAME.

After he figures out that Vincent is losing his mind, but before he knows he’s on Nino’s shit list, Joshua says he wants out. Okay, I thought, now I know where this is going. Vincent is going to act like he’s okay with this, but he’s really not okay with this. The rest of the movie will be about Joshua fighting to get out from under the thumb of Vincent. ‘Cause once you’re in the gang you stay in the gang, period.

Wrong. It takes a different turn. Vincent makes it very clear that he’s not okay with this, so Joshua feels bad and decides to stick with him. Even when Vincent gives him a stack of money and lets him go he’s like ah, shit. I’m going with you. Let’s go kill Harvey Keitel.

There are definitely some self-conscious moments. It’s maybe a little too cute when some henchmen argue over the use of the word “foreshadow” in Scrabble. And definitely too on the nose the couple times Vincent makes speeches about the importance of a belief in a higher power. I also think the whole story would work better without the wraparound scenes, I’m not sure why they wanted it to end that way. And these writers of crime movies have got to realize that whether it’s fair or not Quentin Tarantino is the permanent owner of all this “criminals who make speeches about pop culture” business.

But still, I gotta say I kinda liked the scene where Keitel calls Vincent “a little fishy, splish splash,” and compares himself to a shark, but Vincent counters by declaring himself Roy Scheider. (I was in suspense as to whether he’d think to say “Smile you sonofabitch” when he got his revenge on him.)

That scene has one of these moments that I love, a little thing that might not even register as anything of note to some people, but to me makes the whole movie worthwhile. And I’m guessing this one might’ve been a Keitel ad-lib. In the middle of Vincent’s defiant I-will-destroy-you type speech, it seems like the boss is verbally defeating Nino, sort of the way Dennis Hopper did to Christopher Walken in TRUE ROMANCE, but without the okay,-he’s-going-to-die-for-this connotations. After all this verbal sparring, the underdog is about to deliver the knockout punch… but before he finishes what he’s saying Nino just gets up and walks out of the room like he’s bored. Just completely takes the wind out of Vincent’s sails. And all Vincent can do is leave the premises pissed off that his big moment got stepped on.

TRUE ROMANCE isn’t a bad comparison, because this is a movie that’s mostly about characters and lots of talking (there’s even a version of the frog and scorpion story later used in DRIVE – which writer Eddie Nickerson says on IMDb message boards was added by the director against his wishes) but it does feel an obligation to try to deliver some of the ol’ blood and bullets at the climax, when Joshua and Vincent show up at Nino’s mansion and take on everybody present. There’s a good balance of guns and fisticuffs – kinda funny because I don’t remember them establishing what a highly skilled fighter Joshua was gonna be. We just knew he was good with two pistols. Don’t you know you’re supposed to show him shadowboxing all throughout the movie and then have him punch a guy in one scene at the end? That’s how Cuba works.

As you know if you’ve read Seagalogy (especially the BELLY OF THE BEAST chapter), I’m a big fan of the action movie cliche of books and artifacts – symbols of knowledge, culture, religion, family – getting hit during a shootout, like some kind of half-hearted metaphorical criticism of violence’s degradation of civilization. In this one a photo of Nino’s wife gets shot, but then the guns get put away and another photo of her gets punched. A nice leatherbound collection of Shakespeare’s comedies gets stabbed through with a knife. Cuba chokes a guy to death with an American flag. I don’t think I’ve seen any of those things happen before, but I’m grateful that I have now.

Even though it’s following a satisfying, crowd-pleasing type of trajectory, they find room for some nuance. In the end SPOILER revenge isn’t sweet, but also not horrible in a preachy way. It’s just kind of pathetic. They wound each other from different rooms and are yelling back and forth to each other. By the time Vincent stumbles over to deliver the triumphant coup-de-grace he sees that Nino has already bled to death. He’s just laying there like a sad old man.

I gotta say, this is a legit crime movie, a very good DTV thriller worthy of having been unfairly ignored in theaters. Good job everybody.

Cuba Gooding Jr. DTV filmed in Spokane Franck Khalfoun Harvey Keitel Miguel Ferrer
This entry was posted on Tuesday, June 19th, 2012 at 3:00 am and is filed under Action, Crime, Reviews. You can follow any responses to this entry through the RSS 2.0 feed. You can skip to the end and leave a response. Pinging is currently not allowed.

13 Responses to “Wrong Turn at Tahoe”