Wow – for some reason I never had any interest in EMPIRE OF THE SUN before. Turns out it’s great and sort of a beginning for alot of things. It’s Spielberg’s first WWII drama. One of Christian Bale’s first movies. The one that gave Ben Stiller the idea for TROPIC THUNDER. etc.

It’s a great story about a kid trapped in a conflict he could never understand – not just in the sense that war is incomprehensible, but also in the sense that his situation is fuckin complicated. In fact he spends an early chunk of the movie going around trying to surrender and everybody just laughs at him. 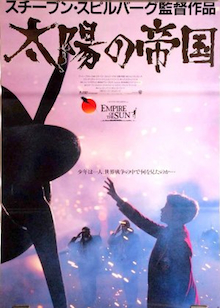 See, Bale plays this kid Jamie and he’s not an idealized kid, he’s kind of a little brat. His family is British but they live in a mansion in Shanghai, a city under the control of Japan. Colonists under occupation. They can tell something’s going on with the Japanese soldiers – that’s because they’re on standby because they’re about to attack Pearl Harbor (is this a prequel to 1941!?) and then the everyday conflict between China and Japan is gonna become much more serious.

Jamie’s family sides with the Chinese, because they feel like that’s their people, but the Chinese – being their maids and drivers and shit – don’t exactly side with them. Jamie likes the Japanese because he’s obsessed with airplanes and he thinks their Zeros are cool. To him the ominous signs of looming war are an exciting time, like a parade coming through town. I mean, what the hell does he know about war other than a list of the coolest planes and the romantic painting on the huge GONE WITH THE WIND billboard he walks past in town?

When the shit goes down Jamie gets separated from his parents – we don’t even know if they’re alive or not. Spielberg didn’t know that the key to box office gold was to have some bungling burglars come after him and he throws stuff at their testes, so instead the movie is about his struggle to survive through the war.

First he pulls an OMEGA MAN and lives in abandoned mansions scrounging canned food and candy. In one great scene he rides a bike through the house. It’s a joyful moment of rebellion and playfulness and at the same time kind of a scary sign that this kid might not be cut out to survive this situation. Does he understand how serious this is? No, he’s just a spoiled little boy. Well, he was. Not so spoiled anymore. Now it’s time for him to prove his salt.

Eventually he ends up in a series of internment camps, where he befriends Basie (John Malkovich), a resourceful survivor of questionable morals, plus other adults (Joe Pantoliano, Ben Stiller) and learns lessons about disease, ass-kissing, looting dead bodies, networking and protecting your stuff. He has to deal with sadistic generals, adults who’ve lost their minds under the stress, people trying to steal his stuff. Doesn’t ever have to do homework though, so that’s probly a plus for a kid I guess.

Jamie was just born into this. It’s not his fault his ancestors colonized this place, or that his family is rich. Give him some blame for bossing the maids around like they were Shane Hurlbut, but he’s too young to know better. He’s got nothing to do with any of this. He’s just a dumb little kid who loves airplanes. He builds a relationship with a Japanese kid on the other side of the barbed wire who plays with toy planes just like he does. We see glimpses of that kid’s life and how he wants nothing more than to fly one of those Zeros. How did they convince this kid that the best thing in the world would be a suicide mission? Well, Jamie would probly want the same thing in his shoes. Some higher up assholes set this machine in motion and kids like this don’t even know they’re getting crushed between the gears.

Basie teaches Jamie all about stuff: getting stuff, protecting stuff. He knows where all the top grade stuff is, so even when he gets out he’s all about driving around finding the best loot. He dresses like he’s in ROAD WARRIOR! Jamie has to learn for himself that there’s more to life than stuff.

It is also important to note that FIST OF LEGEND took place in the Shanghai International Settlement a few years before these events begin. It’s possible that little Jamie pranced condescendingly past Chen Zhen on the street at some point.

For about a year David Lean was gonna direct this, with Spielberg producing. Eventually Lean gave up and tagged in Spielberg, saying he was better at directing kids. Kinda similar to what happened with Kubrick and A.I. in a way. Sadly Lean only directed one more movie, the sequel ANOTHER STAKEOUT, before his death in 1991. (more trivia for you: I made that up, he didn’t direct any more movies, including that one.) The script was by Tom Stoppard, the playwright known for ROSENCRANTZ & GUILDENSTERN ARE DEAD as well as BRAZIL and of course that Craig Baxley movie starring Charlie Sheen as a fireman who snaps and instead of going on tour like Charlie did in real life he goes on a rampage.

Spielberg also got an uncredited rewrite out of Menno Meyjes (RICOCHET). It’s based on a book written by J.G. Ballard which was in turn partly based on a life lived by J.G. Ballard. He didn’t get separated from his parents, but did live in camps like that. I should’ve figured out it was semi-autobiographical ’cause the kid is always excited about words. Oh, writers.

I never read a J.G. Ballard but of course he’s the guy who wrote the book that became Cronenberg’s CRASH. Believe it or not this does have some parallels thanks to Jamie’s fetishistic love of airplanes. When he’s on that roof he yells about “touching” the plane by feeling its heat, about tasting it – “Oil and cordite!” A precursor to Deborah Kara Unger touching her nipples to a plane to get off.

This is a great story and it’s full of great moments, odd little occurrences that reflect the surreal unpredictability of war: little Jamie dressed as a pirate for a party stumbling into an entire platoon of soldiers hiding behind a hill. Accidentally amusing his captors by saluting their planes. Bewildering them by singing with a voice that seems like a dream inside a prison camp (a special skill he learned in the choir at school).

It also has some incredible effects and stunts involving the planes. When Jamie’s on the roof some pilots fly by really low and god damn if it doesn’t look real. If so I can’t believe Spielberg did that after what happened on THE TWILIGHT ZONE. But obviously they were more careful on this one.

Turns out Bale was a good child actor. Here he is playing children of privilege like Bruce Wayne and Patrick Bateman, but without having to learn an accent. I really think this experience probly helped form him into the actor he is now. His character has the intense focus and then he starts to crack under the pressure. I love that scene I already mentioned where he’s on the roof watching Allied bombers attack. He should be ducking for cover but instead he’s nerding out about the aircraft, yelling about the “P-51 – Cadillac of the sky!” When he’s reduced to just “HORSE POWER!!!” I think that’s the crazy Bale we know today.

It’s one of those movies that keeps you riveted and leaves you feeling exhausted at the end, you’ve been through so much. I mean, they’re not trying to kill him as much but it still reminded me a little bit of THE PIANIST. He goes through this whole ordeal and it’s a breath of fresh air when it’s finally over. You feel so good for him. Except he’s so young he’s kind of clueless about what’s going on around him. Spielberg has that reputation as some kind of saccharine, happy ending type of guy, which I don’t think is fair (except TWILIGHT ZONE: THE MOVIE and HOOK). This movie turns that accusation on its head.

That’s the best trick of the movie: it’s cleverly shown from Jamie’s naive perspective. He doesn’t always understand what’s going on, so the John Williams score doesn’t either. The best example of this is when he sees the atomic bomb blast but he thinks it’s a soul going up to Heaven. He watches in awe and the music acts like he’s watching E.T.’s space ship or something. The filmatism makes it look beautiful, and we know better, but the music doesn’t let on.

(Weirdly, Spielberg and Williams did a similar thing with a mushroom cloud in KINGDOM OF THE CRYSTAL SKULL, but it was more of an action setpiece punchline in that one.)

(Have you guys checked that one out yet? I still think you would like it.)

EMPIRE OF THE SUN is a good one. I know it got good reviews and everything but if there is an under-appreciated Spielberg joint this might be it. It doesn’t come up that much after the huge success of the other two WWII movies he did, but it’s another really interesting and completely different perspective of the same worldwide catastrophe.

Ben Stiller Christian Bale J.G. Ballard Joe Pantoliano John Malkovich Steven Spielberg Tom Stoppard
This entry was posted on Monday, January 16th, 2012 at 11:49 pm and is filed under Drama, Reviews, War. You can follow any responses to this entry through the RSS 2.0 feed. You can skip to the end and leave a response. Pinging is currently not allowed.

34 Responses to “Empire of the Sun”