I thought DAYBREAKERS was much better than the dumb B-movie I expected, but if I needed one of those in my diet it’s a good thing LEGION also came out on DVD this week. It’s a cheesy but sort of interesting movie about a group of stock characters trapped at one of those old timey diners that if you’re a character in a movie you will drive out into the middle of nowhere and happen to be at when some shit goes down. In this case it happens to be ground zero in God’s plan to wipe out humanity because, according to the narrator, “He got tired of all the bullshit.” 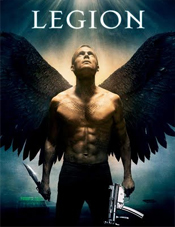 Ain’t that a bitch? Diners full of people like this have faced down giant worms, killer trucks, body-switching Jason, etc., but there aren’t too many monster movie foes as rough as the big guy in the sky. And in this case He’s a mysterious unseen God, not Morgan Freeman or somebody. In my opinion God’s shit list is a good one to avoid having your name on.

Luckily for humanity they’ve got a powerful ally in the angel Michael (Paul Bettany, taking over John Travolta’s beloved cinematic creation) who thinks God is being a Dick and has refused his order to kill the unborn baby that for reasons I didn’t understand is prophesized to grow up and save humanity in a John Connor type of fashion. Michael pulls up in a stolen cop car loaded with guns and arms the diner patrons to the teeth so they can gun down and blow up the approaching angelically possessed monsters. Some of them get out and get filled with bullets, mostly they just drive up and their cars explode. In my opinion there is a possibility that the creative minds behind this motion picture have played some video games at some point in their lives.

I won’t give away how this all kicks off, it’s a pretty good over-the-top scene that was given away in the trailer, but maybe some of you didn’t see that. There are some pretty cool (but completely cartoony) digital monster effects in some scenes. It’s all very computery, especially the swarm of locusts that appears and disappears mainly just so Tyrese can say, “You expect me to explain the behavior of a pestilence?”

I’m not sure if it’s actually trying to be scary. Their strategy isn’t to turn everyday harmless things into monsters, but outdated movie things that most people have never seen in real life. For example a 1950s style ice cream man with a little hat and everything CGI stretches into an evil-appearing-but-actually-servant-of-God-spider-man-monster. I hope these filmatists didn’t think they were being subversive by showing the dark side of an outdated style of ice cream man. But I’m thankful they didn’t choose clown.

The protagonists include Dennis Quaid (JAWS 3) as the owner; Lucas Black (TOKYO DRIFT) as his son, a mechanic; Tyrese (2 FAST 2 FURIOUS) as the typical Tyrese good-hearted criminal and Charles S. Dutton as the classic Charles S. Dutton righteous Bible-toter. Also you got the pregnant waitress and a bickering couple and their sullen teen daughter. And I don’t mean to give anything away but they may or may not all manage to work through their issues, improve their relationships and come to an understanding about their pasts and their purposes in life and what not.

So the characters are pretty one-dimensional and by the numbers, and some of the action is pretty dark and muddy. The angel Gabriel, who tries to be God’s pet (you know how Gabriel is) fights Michael (I wonder if he’d get mad if I just call him Mike?) with some kind of holy buzz saw and some wing-chops, which is pretty good. But other than that I don’t remember any battles that were very exciting. 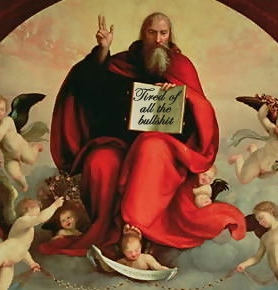 Still, I gotta give this one a marginal passing grade for the sheer ballsiness of the idea. It definitely stands out from the pack. Mike is basically a conscientious objector against God. He has been taught to love by God and is not about to switch over to hate. But Gabriel is just a blind follower, a toadie, a yes-man. At first glance it seems like these crazies got away with making a movie where God is the bad guy. So I guess to some people it might be a cop out that it ends up being a little more thoughtful and nuanced than that. I think it’s still enough to offend many people (it does depict God sending monsters to kill people) but it ends up a good message about really understanding and believing in something (your religion, country, whatever) instead of just stupidly following orders. Michael is a good soldier, just not a good German.

Dennis Quaid Lucas Black Paul Bettany Tyrese
This entry was posted on Wednesday, May 12th, 2010 at 12:29 am and is filed under Horror, Reviews. You can follow any responses to this entry through the RSS 2.0 feed. You can leave a response, or trackback from your own site.