In those pre-DIE HARD, mid-MOONLIGHTING days it made more sense than anything for Bruce to star in a Blake Edwards comedy. He was kind of thought of as a hip young smartass comedy star, instead of a smoldering veteran action star who can also be funny. 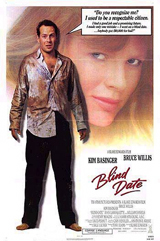 In BLIND DATE Bruce plays Walter, a guy really struggling to keep up in his high-paying office job. He stays up all night preparing a report, doesn’t have time to shower, runs to work, does the presentation and gets shit on for his appearance. His boss tells him to be more like his Ellis-like prick co-worker who spent the night fucking some girl in a limo and then pretended he couldn’t present anything because of printer trouble.

Ain’t that the truth that a guy who is a schmoozer, even if he’s Ellis – maybe especially if he’s Ellis – is gonna get all kinds of good jobs and do well, have all kinds of money and get to do the shit he wants in life, just because he’s good at punching people on the shoulder and calling them buddy. It sucks but it’s true.

Now Walter has to bring a date to a big dinner the company is throwing to impress a Japanese investor, and his love life ain’t so hot either. In desperation he lets his brother (Phil Hartman) set him up with a friend from Baton Rouge (Kim Basinger as Nadia) who turns out to have a high sensitivity to alcohol that turns her into a raging lunatic, among other complications.

This is a good time capsule movie because it’s aimed at the concerns of the yuppie era. Walter feels like he needs to have this type of job and make lots of money, own an expensive car, use that to impress a woman. But he doesn’t fit into this world. He obviously thinks his friend’s sexual adventures are sleazy, but also envies them (especially when presented with Polaroid documentation).

Nadia’s alcohol problems are almost like a super power to cut through all that bullshit. She dismantles all social convention, gigglingly Telling It Like It Is, exposing the horndog co-worker, cutting down the Japanese investor’s sexist traditions that everyone else is tip-toeing around, introduces a geisha to California divorce law. She destroys Walter’s expensive suit and car and removes him from his soul-killing job. She’s a tipsy, one-woman Project Mayhem.

Meanwhile she’s being chased by John Laroquette (THE TEXAS CHAIN SAW MASSACRE), a psychotic ex-boyfriend who crashes into a pet store, a paint shop and a flour factory and keeps going. And she so angers Walter that he tries to outdrunk her and out life-change her. He kind of returns the favor, humiliating her in front of her type of rich people crowd who see themselves as more cultured. (One of our first impressions of her is from her friend’s art show – it seems to be a blatant H.R. Giger ripoff.) Anyway, this lands Walter in jail on an attempted murder rap. (Long story – see movie for details.)

Then the movie takes a big turn when he faces a judge – I think this is the funniest scene. It turns out Laroquette is a hotshot lawyer and when he approaches the bench we realize that the judge hates him more than any man on earth. There’s alot of funny shit going on in this scene but the part that gets me is the judge, having broken his gavel, pounding one shoe against the sound block and yelling “ORDER IN THE GOD DAMN COURT!”, then politely turning to the clerk and saying, “Sorry, Agnes.” That’s some funny shit. But maybe you had to be there. Or maybe you just gotta be like me and think it’s hilarious when men apologize to  women for swearing in front of them, like they’re made out of a delicate sugar that will melt under the pressure of harsh words.

Although Walter is portrayed as a total mess at work he’s obviously supposed to be a real cool guy, like David Addison on Moonlighting. The main reason we know this is because before the blind date has gone south he surprises Nadia by taking her to a special place: a studio where legendary jazz guitarist Stanley Jordan is recording. He says hi to Stanley, who lets him just sit and have a drink while watching him record. Pretty elite, but there’s a perfectly logical explanation: he used to play guitar, and used to record here. You know, just used to hang out with Stanley Jordan. No big deal. But he’s in business now. That was the old days.

Well, he delivers on this hidden super-coolness at the climax when he interrupts impending nuptials by standing in the distance and yelling “Yo!” This is of course followed by diving fully clothed into a swimming pool, where the bride-to-be also jumps and makes out with him, and then all the wedding guests applaud. Not many people can pull that off, there is a list of under 10 Americans who can do it but Walter is on the list. Stanley Jordan is his alternate.

There’s an odd little detail I noticed that might be worth pointing out. At one point Walter shoots at Laroquette’s feet and yells for him to dance. He demands that he moonwalk, and he does. But then Walter says, “I hate that shit.” No big deal, but I remember in THE LAST BOY SCOUT Bruce’s character made a show of disliking funk and hip hop. Is this a theme? I’d worry that he had some bias against black music if the last video I watched hadn’t had him singing with the Temptations.

I think BLIND DATE was a poorly reviewed movie and viewed as really broad at the time. But now days it seems kind of classy and understated for this kind of thing. For example there’s a whole scene where he’s trying to peek into a women’s restroom to see if Nadia is inside, and a club bouncer sees him doing it. Instead of the joke being that he looks like a pervert the joke is how uncomfortable it makes him. He stammers a long, convoluted (and completely true) explanation for why he’s doing this as the bouncer just stares at him wordlessly with an expression he interprets as “I don’t believe you” but is probly more like “I like that I can torture you just by standing here not saying anything.”

I’m not saying it’s nearly as good or as epic, but the tone somehow reminds me of THE BLUES BROTHERS. It’s ridiculous enough that a character can suddenly be attacked by a monkey while driving, but deadpan enough that it seems to be grounded in some kind of real world. It’s got a whole lot of slapstick humor, but it’s more than just knocking shit over. For example there’s a long, elaborate, quiet sequence of Walter sneaking around a mansion trying to find Nadia without being spotted by Laroquette, his parents, his butler or a doberman, and having to climb walls, fall off roofs, duck around corners, hide under beds… Shit, maybe this is how he became an action star?

And I kind of like the unorthodox romantic arc where they go pretty quickly from absolutely despising each other to thinking oh shit, are we actually in love? Why didn’t we notice that before?

The one bit that really failed for me though is when he goes to drop her off at her friend’s house and as they’re standing at the front door suddenly the house is jerked away by a construction crew. I don’t really get why this happened, how it happened to happen at that exact moment, why they couldn’t see the people about to do this, why the people about to do this didn’t notice there were people standing in front of the house, or why a construction crew would do that exactly anyway, and if so why they would do it in the middle of the night. Other than those few questions though I guess it was pretty self-explanatory.

Yes, it’s true, I liked BLIND DATE. Whatever happened to this young comedian, anyway? I’ll have to look for some of his other ones.

Blake Edwards Bruce Bruce Willis Kim Basinger
This entry was posted on Monday, April 5th, 2010 at 12:35 am and is filed under Bruce, Comedy/Laffs, Reviews. You can follow any responses to this entry through the RSS 2.0 feed. You can skip to the end and leave a response. Pinging is currently not allowed.