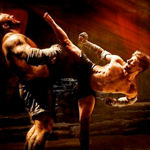 I love when sequels open with the character we know suddenly in a whole different place and life situation. My go-to example is RAMBO III, where we find John living in a temple in Thailand, winning underground stick fights for money. But this is more like a TEMPLE OF DOOM opening because we find Kurt in a tux, sexy salsa dancing with his now-wife Liu (Sara Malakul Lane, Seagal’s daughter in BELLY OF THE BEAST) on a train at night. They get attacked and he has to slow-motion fight some people, including on top of the train in pouring rain as it crosses a bridge, until they all fall off. END_OF_DOCUMENT_TOKEN_TO_BE_REPLACED 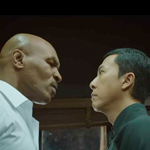 Once again this story involves a public challenge by another martial arts teacher trying to prove superiority over the local legend. This time it’s not a different style against Wing Chun, it’s a guy saying that he has pure Wing Chun and Ip Man is peddling some bullshit watered down autotune Wing Chun. This guy shouldn’t be fuckin with Ip Man, but he’s a sympathetic enough character that I didn’t initially realize he was gonna be the antagonist. END_OF_DOCUMENT_TOKEN_TO_BE_REPLACED

I don’t really follow boxing so I didn’t know much about him, and it turns out it’s an interesting story. He talks about being picked on as a kid, then getting in his first fight (a guy killed his pigeon) and winning. That changed his whole attitude about himself. Then he started boxing and he met this grizzled old white guy Cus D’Amato, he’s like Burgess Meredith in ROCKY, he takes Mike under his wing and molds him mentally and physically into a warrior. At first Mike wasn’t taking it that seriously, he was still on the streets robbing people and shit, until this D’Amato convinced him he could be great. They had a father-son type relationship, you see through vintage interviews how much they meant to each other, then the guy died when Mike was 19. Real sad story. END_OF_DOCUMENT_TOKEN_TO_BE_REPLACED