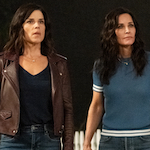 But some of us still like SCREAM and the i.p. gods or whoever decided that the time has come for another one in another era. Many things have changed since the last one. Obviously horror has changed, as it always does. But more importantly the director of the original four, Wes Craven, has passed away, and (in better news) the Weinstein Company has died and gone to Hell, so this is the first time the series has been continued by a new set of people. The rights were picked up by Spyglass Media Group, James Vanderbilt (THE RUNDOWN, ZODIAC) & Guy Busick (READY OR NOT, Castle Rock) wrote the script, and Matt Bettinelli-Olpin & Tyler Gillett (the team behind READY OR NOT) directed it, in the Craven spirit but not trying to be a throwback or anything. (There’s even a joke about overlit ‘90s movies.) Original writer Kevin Williamson did give his blessing and sign on as executive producer, and has given many interviews (such as on Mick Garris’ podcast Post-Mortem) verifying that he really was involved and is excited about the movie. END_OF_DOCUMENT_TOKEN_TO_BE_REPLACED