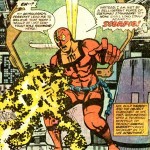 When you take away the artfulness of Fincher’s direction (and add a side order of Seagal/Wayans bickering) you can see how morbid and ugly that type of subject matter is. So the fact that Fincher took the time to do such a good job of it makes you question his mental health a little. Didn’t they say he personally splattered the fake blood on some of those victims? 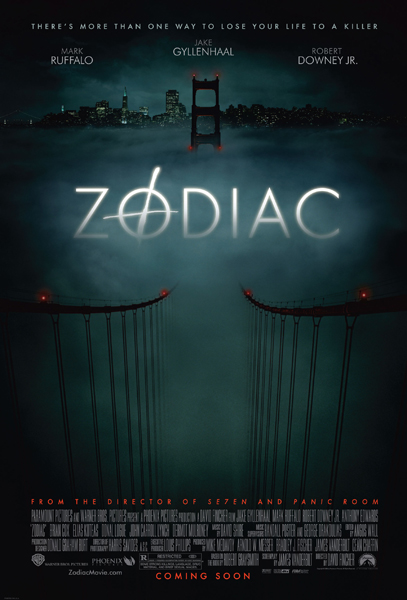 So with that in mind it’s interesting that Fincher’s new movie (and by the way, it’s about god damn time I’m able to write those words) is ZODIAC. Now we’re dealing with a real life serial killer, one that really did taunt police and play games and use bizarre gimmicks. But this movie isn’t like SEVEN – after all, it’s a story without the expected ending, the guy was never caught. This is almost an anti-SEVEN. It starts out with a scary re-enactment of the second for-sure-done-by-the–Zodiac murder, and you get that familiar one-two-punch of the true crime genre – morbid fascination and guilt for being morbidly fascinated. On one hand I feel like a creep for wanting to know every detail of some sicko in a super villain hood and robe who murders people and then sends puzzles to the newspaper. On the other hand, how can you not? That is some crazy shit, that that actually happened.

But what you don’t necessarily realize at first is that the movie’s not really about re-enacting the case. Once it’s lured you in with the scares you find out it’s really about obsessing over the case. It’s full of factoids and contradictions and false (or are they?) leads. After the movie I spent way too much time on the internet reading about the real case to see how accurate the movie was, and I didn’t find one thing that contradicted what is presented in the movie. I didn’t find anything they left out to make a theory more convincing or dramatic. In the movie you see some of these murders committed (something you actually didn’t see in SEVEN) but at least 90% of the movie follows the various people spending years of their lives puzzling over all these facts, trying to find the right combination of leads and details and scraps of evidence that will unlock the whole thing. There’s a hell of a cast of characters, with police from multiple jurisdictions (including but not limited to Mark Ruffalo, Anthony Edwards, Donal Logue, and that one balding guy that’s on one of those cop shows like Law & Order: Police Murder Science Squad or CSI Underwater Consultation Unit), and there’s the people at the San Francisco Chronicle (mainly Robert Downey Junior as a flamboyant Robert Downey Junior type reporter and Jake Gyllenhaal as Robert Graysmith, the editorial cartoonist who watches from the sidelines and winds up so obsessed he ruins his marriage doing his own investigation and writing the two books that the movie is based on).

After seeing the movie I did your basic internet research and saw that alot of people think the books are crap because they disagree with Graysmith’s theory. The movie shows him gathering a huge amount of circumstantial evidence against a particular guy he thinks is the Zodiac, and the movie itself notes that the guy was later apparently cleared based on DNA evidence. That’s the frustration of this case and this movie in a nutshell – there are so many coincidences with this guy that you can’t imagine how he could NOT be the one – I mean, if you’ve seen it or are familiar with the case,what about that watch? What are the chances of that happening? – and yet all of the physical evidence says he’s not the killer.

At least one Amazon review of Graysmith’s first book is written by a guy just as obsessed as Graysmith is portrayed in the movie – this guy claims to have tried to visit residences, businesses and roads described in the book in order to refute it. Just check out one or two Zodiac related web sights to see how this sicko’s games in the late ’60s take over people’s lives even to this day.

I think we can all recognize a little bit of that obsessive quality in ourselves. Or at least I hope so because I know I can. Not just because of my whole Steven Seagal thing either. Sometimes you stumble across something and your brain just gets stuck on it. One time I read about this lady who tried to sue Warner Brothers and the Wachowski Brothers claiming that THE MATRIX was plagiarized from an unpublished manuscript she supposedly sent to the Wachowskis in the ’80s. Sounds curious, but then you read about it and find out that when somebody from the FBI pointed out that her story also was similar to THE TERMINATOR, she decided that THE TERMINATOR was also plagiarized from the same story and added 20th Century Fox into the lawsuit. To me that bit was enough to prove that the woman was a few nipples short of a hog’s teet, but I was amazed to see how many web sights and even magazines picked up her story and repeated her basic claims as if she had credibility. So I started reading more and listening to interviews with her, wondering why people’s inclination to believe the worst about Hollywood overcame their suspicions of a lady who would go on the radio and talk about how there’s no such thing as the ten commandments because numerology proves that there’s no such thing as the number 10, and that the spells used in Harry Potter movies are real, and that she would offer a $1 million reward for a bootleg of the “original” version of THE MATRIX she claims was played in theaters where a STAR WARS style scroll at the beginning gave away the plot twist later in the movie that there was a nuclear war and people were living as batteries. Also in her version of THE MATRIX there was no matrix.

I worked on a column about that shit for weeks, compiling the craziest things she said and inconsistencies in her argument before I realized I had to throw the thing away, nobody wants to read that shit, nobody should want to read that shit. And that’s just alleged plagiarism, man – when the crime is murder, especially unsolved murder, you can see how somebody’s mind could get swallowed by that current. All kinds of horrible shit happens in the world but when it happens on your block or to somebody you used to know or something, it strikes a different chord. A guy crashes his car near the exit of the freeway where you grew up, climbs over the side and beats some random people to death before the cops shoot him, you end up reading every article about it trying to figure out what made him snap.

Here in the northwest there are any number of macabre historical locations to get you wallowing in the mental muck. Thanks alot, Green River Killer. Recently a friend of mine found out that a particular bar in his neighborhood was where Ted Bundy prowled for some of his victims. I tried to cheer him up by pointing out a thrift store four blocks away that had been one of Bruce Lee’s kung fu studios, where at one point he even lived in the back. You need some positive energy to balance out the negative, or you’re gonna be like Jake Gylenhaal and fuck up your marriage with Chloe Sevigny. If only Bruce had crossed paths with Bundy at some point, I think he could’ve defeated him. Or the Zodiac, for that matter, because Bruce lived in San Francisco too. (although he belongs to us, you fucks.)

There’s only one man who ever did defeat the Zodiac, and that’s Dirty Harry. Obviously the killer “Scorpio” in DIRTY HARRY is inspired by the Zodiac killer, and I’ve read that David Toschi, the cop played by Mark Ruffalo in ZODIAC was one of the inspirations for Dirty Harry. It’s interesting because they give Ruffalo a Dirty Harry hair do and he even talks quiet like Clint. I didn’t know if they’d deal with that issue in the movie but they do – we even see him attending a screening of DIRTY HARRY and walking out in disgust. He believed in actual procedure and, unfortunately, never had an opportunity to jump off a bridge onto a schoolbus driven by the killer like in that awesome scene in DIRTY HARRY. I’m not sure what to think about the idea that Dirty Harry Callahan is based on this guy – after all, the role was originally written for Frank Sinatra and turned down by John Wayne, Steve McQueen and Paul Newman, and at times would’ve taken place in New York or Seattle, so how much can it really be Toschi? But I guess during production Clint may have used the guy as reference, who knows. (In the movie they say he inspired BULLITT and I’ve also read he inspired Michael Douglas’s character on Streets of San Francisco.)

I’ve already heard people saying this one is a masterpiece, but I’m not sure about that. FIGHT CLUB and THE GAME both blew me away and struck me as classics the first time I watched them. ZODIAC didn’t quite knock me on my ass like that, but it’s definitely an interesting movie, an original one, with a great cast, some beautiful but subtle (can’t believe it’s digital) camerawork, and some haunting subject matter that I can’t stop thinking about. Maybe on a second viewing I might feel like pulling out the M-word, but for now it’s just a good movie.

By the way, if anybody goes in expecting the Rubik’s Cube to be solved at the end of this 2 hours and 40 minutes they’re in for a hell of a disappointment. It ends with the cube almost solved, but one edge is all mixed up, and it puts the cube down and says that’s it, that’s as close as I’m gonna get.

David Fincher
This entry was posted on Monday, March 5th, 2007 at 5:32 pm and is filed under Crime, Drama, Mystery, Reviews, Thriller. You can follow any responses to this entry through the RSS 2.0 feed. You can skip to the end and leave a response. Pinging is currently not allowed.