The movie was pretty much what I expected when I first succeeded in skipping it. Unfortunately when they’re trying out action heroes that have not yet convinced the Hollywood suits, they have to team them with some company man as his partner/buddy/”comic” relief sidekick. For example they pulled this shit on Chow Yun Fat in BULLET PROOF MONK and here they have the same fucking narc, Sean William Scott from the AMERICAN PIE teenage pictures, saddling down The Rock, making sure he stays in line and doesn’t pull anything funny like making a great movie. Nope, the wacky buddy is always there to make up a couple jokes at the beginning and repeat them over and over and over and over again until the end of the movie. If there is a part that is mildly amusing, don’t worry, you are sure to see it again. There is no need to rewind. There is alot of unneccessary shtick type business. Alot of stupid shit like oh no, they crash a car off a cliff and scream, or oh no, a monkey jumps on their head. Who knows what kind of craziness will happen next? And Ewan Bremner from Julian the Donkey Boy is in there as an outrageous scottish pilot, and everytime he comes on screen you can tell that the filmatists thought it was hilarious, but you really have no idea what it is about him that is supposed to be so hilarious. I’m sure it was great though if you made the movie. Just not if you watched it. 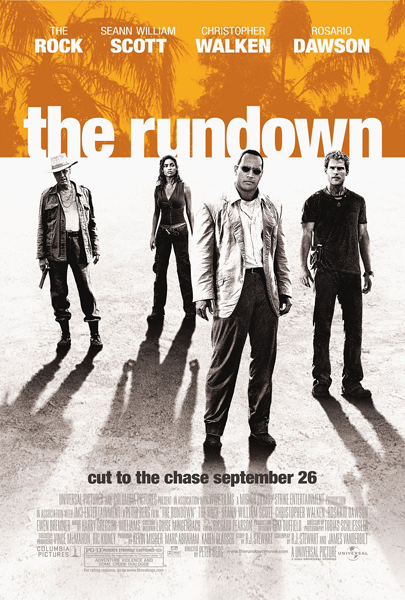 But having said that, any of my buds who said THE RUNDOWN was “surprisingly good,” they are not that far off. There is definitely some good qualities in this picture. I should probaly mention what the shit is about. Well Rock plays a bounty hunter working for a specific rich criminal type. He wants to get out though and start a restaraunt. In order to do this he must complete one last job, retrieving his boss’s son from a jungle somewhere. The son of course is Sean William Scott who is mixed up trying to find a legendary Indiana Jones type treasure. Rock has a hard time getting the kid because of Christopher Walken, the slavedriver at a huge diamond mine, who figures the treasure belongs to him and wants to use the kid to find it. Also the rebels who want the treasure so they can stop Walken.

Shit, you’re right. This is a treasure movie. I’m not making this sound very good.

But Walken has a couple good speeches, one of them about the tooth fairy and the other about how the hell on earth of his diamond mine brings “a little piece of heaven” to rappers who like to wear shiny earrings. This ties it into the opening a little bit, which is the best part of the movie.

In the opening scene, The Rock is at a night club where football pros (wearing those diamond earrings) hang out. He’s on a mission to take the Super Bowl ring from a player with a big gambling debt. He tries to talk to this guy, saying he’s embarassed because he’s a big fan. First the guy gives him an autograph, then gets pissed and throws Crystalle in his face, and a bunch of other huge football players puff their chests out. So Rock goes to the bathroom and calls the boss on his cell phone, begging him to let him do it another day because “the whole offensive line is here.”

At first you assume he’s scared, but then he explains that “these guys have a good chance of repeating this year – I do not want to hurt them.” And you can see where it would go from there.

So yeah, there were a couple funny tough guy parts in the movie, but the thing that made it actually noteworthy is this guy The Rock. I’m not completely sold on the movie but I am completely sold on The Rock. Being a wrestler, he is a giant hulking muscleman, but unlike Governor Schwarzenegger he actually seems qualified to be an actor. Not like Governor Ventura, where he is funny when he says tough guy lines. This guy is easygoing and charming. He could play non tough guy roles if he wanted to. And he’s palatable to us non wrestling fans because he’s handsome and has short hair and hides his muscles under a Cary Grant style suit (but he still has those giant shoulders, like Superman or a walking cheese wedge). He’s just a likable dude who happens to be of intimidating size. And I know I said Vin Diesel was the next big badass star (I still kind of like him) but I gotta admit this guy may be a better bet, because he seems so much more humble. It would be harder to hate him if you had seen his movies.

I probaly wouldn’t’ve guessed this, but it’s his fighting that could be better. The acting is perfect, it’s the fighting this wrestler has a problem with, in my opinion. At least in the hands of these people, wrestling does not translate too well to action scenes. One obvious exception is the legendary, classic and untoppable street wrestling scene in John Carpenter’s brilliant ode to the late Ronald Reagan, THEY LIVE. Here they don’t do the same approach of just showing people do wrestling moves in a movie – they try to mix his usual throwing people, clotheslining and drop kicking with wire work and martial arts and crap. It’s not terrible, but it seems kind of silly and fake – you know, like wrestling. What I would like to see is The Rock in a movie that doesn’t have a bunch of fight scenes. Maybe some punch outs but not big choreographed fights. So instead of trying to be a Jet Li or a Steven Seagal he is more of a Lee Marvin or a Payback. The emphasis is on what he says and does and not how he kicks and jumps.

I believe he is playing an Elmore Leonard character soon (a supporting role in the GET SHORTY sequel) so maybe that will send him in the right direction of playing characters instead of fighters.

Anyway, I would like to welcome The Rock to the films of Badass Cinema. I’m looking forward to him making a really good one.

Christopher Walken Ernie Reyes Jr. Peter Berg Rosario Dawson Seann William Scott The Rock
This entry was posted on Sunday, June 20th, 2004 at 12:22 pm and is filed under Action, Comedy/Laffs, Reviews, Thriller. You can follow any responses to this entry through the RSS 2.0 feed. You can skip to the end and leave a response. Pinging is currently not allowed.

3 Responses to “The Rundown”