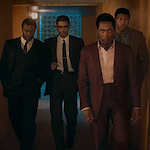 In town for the fight are Clay’s spiritual advisor Malcolm X (Kingsley Ben-Adir, KING ARTHUR: LEGEND OF THE SWORD, THE COMMUTER), the singer Sam Cooke (Leslie Odom Jr., RED TAILS) and NFL great Jim Brown (Aldis Hodge, DIE HARD WITH A VENGEANCE), there to do color commentary. After the fight they meet up at Malcolm’s humble hotel room, guarded by two Fruit of Islam, the very serious Kareem X (Lance Reddick, JOHN WICK) and young Brother Jamaal (Christian Magby), who does a really funny double take and star struck grin when he realizes the guy he’s letting into the room is Sam Cooke. END_OF_DOCUMENT_TOKEN_TO_BE_REPLACED