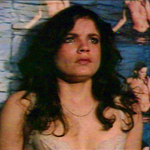 This is also not a slasher movie, and barely a horror movie, but it does include stalking and building tension and is actually quite good. END_OF_DOCUMENT_TOKEN_TO_BE_REPLACED

Watching the remake of LONG WEEKEND today something seemed awfully familiar. I mean not just the movie itself. It was the opening credits. Flying over Australian trees and bodies of water, gently pulsing electronic tones, for a second I thought I forgot to change the DVD because it seems like the exact same credits as the last movie I watched, STORM WARNING. I knew it was the same writer, Everett De Roche, but it turns out it’s the same director too, Jamie Blanks (also editor and composer). So he must’ve been on a De Roche kick just like I am.
END_OF_DOCUMENT_TOKEN_TO_BE_REPLACED

In my review of LONG WEEKEND I mentioned that the same Australian, Everett De Roche, had written that one, RAZORBACK, ROAD GAMES and LINK, and because a track record like that is rare for a non-director screenwriter I would definitely have to watch some of his other works. Since I am a man of honor and what not I’ve already done that with the much more recent STORM WARNING (2007). I’ve found references to the script being 25 years old, but I think De Roche worked with them to make the movie, they didn’t just find it in a closet somewhere and shoot it without telling him.
END_OF_DOCUMENT_TOKEN_TO_BE_REPLACED

Peter (John Hargreaves from DEATHCHEATERS) and Marcia (Briony Behets) are a couple who are really pissed off at each other when they decide to go camping on a beach out in Middle of Nowhere, Australia. There have been some serious betrayals and traumas that they’re still dealing with and spending the 3-day weekend together is supposed to maybe help, but only seems to be exacerbating things. You know these two aren’t the best for each other when Peter is introduced watching Marcia through a rifle scope. He also likes to fake at hitting her when she has her back turned to him. This guy might be kind of an asshole, I’m thinking.
END_OF_DOCUMENT_TOKEN_TO_BE_REPLACED

LINK is a really unusual horror picture that starts out like a normal monster movie (POV of unknown beast crawls into a little girl’s room at night) but succeeds by avoiding any of the obvious formulas. Terence THE LIMEY Stamp plays Dr. Phillip, an eccentric professor at London College known for his books and lectures about primates. Academy Award nominee Elizabeth Shue (PIRANHA 3D, THE HOLLOW MAN) plays Jane, an American student who wants to learn from him and manages to become his assistant, staying at his remote property where he does IQ experiments with his apes Imp, Voodoo and Link. END_OF_DOCUMENT_TOKEN_TO_BE_REPLACED

Anyway I decided to watch this one by Richard Franklin, best known in the states for the surprisingly decent PSYCHO II. He did that one because he was obsessed with Hitchcock, studied all his movies, even got him to come speak at his film school. Can you believe that shit? “Good evening kids, I’m Alfred Hitchcock. Questions?” I wonder if he hung out in the dorms at all. END_OF_DOCUMENT_TOKEN_TO_BE_REPLACED