Watching the remake of LONG WEEKEND today something seemed awfully familiar. I mean not just the movie itself. It was the opening credits. Flying over Australian trees and bodies of water, gently pulsing electronic tones, for a second I thought I forgot to change the DVD because it seems like the exact same credits as the last movie I watched, STORM WARNING. I knew it was the same writer, Everett De Roche, but it turns out it’s the same director too, Jamie Blanks (also editor and composer). So he must’ve been on a De Roche kick just like I am. 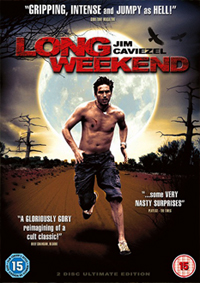 De Roche wrote the original LONG WEEKEND and is credited for this one too – not just “based on a screenplay by,” he gets sole writing credit again. And as far as I can tell this is like a Joseph Stefano rewriting PSYCHO for Gus Van Sant type deal, because it’s almost the exact same dialogue throughout the whole movie.

In my review of the original LONG WEEKEND I linked to an interview with De Roche where he mentioned a more elaborate ending they failed to pull off:

“A large slab of the script was omitted because of the difficulty of working with animals. I wrote an enormously complicated sequence for near the end where the animals give Peter a second chance. They want him to wise up, and he is at the point of doing so when he hears a truck in the distance. He dashes off to the highway, and the animals decide there is no hope. Poetically, they leave it to another man to kill him.”

So I was looking for that, but if they did it, I didn’t get it. It didn’t seem like the animals were trying to give him another chance. There was a snake in a tree. I think an owl hooted at him. There were no subtitles, it’s hard to know what he meant.

Anyway, Jim Caviezel (playing Australian) is Peter in this version, Claudia Karvan (DAYBREAKERS) is Marcia, only I guess she’s called Carla. That’s one of the major departures from the original. Updated for the 2000s. Who the fuck is named Marcia? That’s not something this generation can relate to. The dog is still named Cricket, but it’s a different breed. A nice twist.

Like PSYCHO the modernization is minimal. There is a mobile phone at the beginning, but no texting. Instead of $3,000 he spent $10,000 on the camping equipment. And there’s a part where they talk about Gnarls Barkley. Nah, I’m just fucking with you on that last one. The closest thing to a dated reference is when Peter’s hunting ducks he starts doing a Christopher Walken impression for a little bit. That was a good reason to update it because when the original was filmed they didn’t know anybody knew who the fuck Christopher Walken was. I mean he had been in ANNIE HALL, but I’m not sure most people would get the reference. By the time LONG WEEKEND came out here THE DEER HUNTER had been out for a year, but there was no way they could’ve known. So in the remake they were able to fix that.

I don’t know man, I don’t really get why they made this movie, but I don’t got nothing against it. Even watching it a few days after the original it was pretty entertaining. But I’m the guy who kind of likes watching the PSYCHO remake, so what the fuck do I know? It’s interesting to me to see two different sets of actors doing the exact same shit. It shows how great the script is that it can be done with different people in a different style and an entirely different era and still work. The characters still work, the situation still works, the abortion and nature themes are still relevant, it’s still funny when he points out that he just got attacked by an eagle.

I think Caviezel might be a little more sympathetic in the role than the O.G. Peter, but he’s still an asshole. One part that struck me is when they’ve seen this black shape in the water threatening him while he surfs, so he gets out the rifle and shoots it, and later Carla says it could’ve killed him. He says no, it was “probly just a dolphin.” And it doesn’t bother him that he might’ve shot a fucking dolphin! It’s like don’t worry dear, everything is okay, I just shot a dolphin, that’s all. Murdered an intelligent, endangered animal capable of communication and using tools. Don’t be so upset.

Maybe that is a dated line, or maybe it’s a good example of why the koalas and spiders and shit want to give this prick the business.

And the second time around I really noticed that geez, this guy is way too angry about her spilling sugar. So what if the ants get into it? This is not something an adult should be yelling at another adult about. That wasn’t the last sugar in the world, dude. Calm down.

I realized this time that the husband disrespects nature by shooting, chopping, littering, running over, etc., but the wife disrespects it just by not liking it. She doesn’t enjoy the beauty at all, she locks herself in the tent. When she does lay out there it’s face down to get a tan on her back. She says “this place is horrible” and calls it “this awful place” and I don’t think it’s just because all the animals hate her. She just doesn’t like the outdoors. Or eagle’s eggs.

Cricket didn’t turn on them in this one. That was a little disappointing. If anything I think that aspect should’ve been played up more. It’s a major betrayal when man’s best friend conspires with snakes and eagles. Taking away that blow makes it feel a little soft. But they make up for it by giving Peter a more gruesome death, I guess.

In the U.S. this was dumped straight to DVD with the title NATURE’S GRAVE, and what is that supposed to mean? It doesn’t sound like Nature is creating a grave for you. NATURE’S has an apostrophe, it’s possessive. Here lies Nature. This is the grave where Nature is buried. But by definition if you bury Nature aren’t you covering Nature in dirt, and isn’t dirt already Nature? Well, maybe it’s buried in jelly bellies. Or those plastic balls the kids play in at Chuck E. Cheese. I don’t know.

I do know that this does not look like a cover designed by professionals: 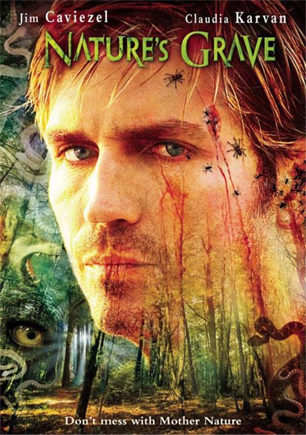 It’s weird because Jim Caviezel is always known for having played Jesus, people even just refer to him as Jesus instead of Jim. And like the fucking Romans the Hollywood decision makers won’t give the guy a fucking break. I’m not gonna cry over this one, but despite the chronically literal-minded knuckleheads on IMDb messageboards (yeah, I know, don’t read ’em. But they’re just sitting there. Sometimes you get curious) I feel like some people would enjoy this movie if they knew to give it a chance. It really didn’t need to be mocked and beaten and forced to wear a crown of thorns like that fuckin cover.

I guess HIGHWAYMEN and OUTLANDER weren’t treated as badly, but those are legitimately good movies he stars in that they failed to get people to see. They forgot to tell people how unusual HIGHWAYMEN was, or that OUTLANDER is a movie that exists and that you could watch.

Maybe there really is a McCarthy style blacklist against conservatives in Hollywood, like the AIRPLANE! guy said when he made that horrible piece of shit movie. I didn’t know it but I’m reading up on Caviezel here, it turns out he doesn’t believe in doing sex scenes, and did an ad against stem cell research (rebutting an ad by Michael J. Fox – like an anti-Marty McFly dis record), and donated money to notorious gay-hating douchebag former Senator Rick Santorum.

That last one is hard to forgive. On the other hand I kind of feel sorry for him because he got struck by lightning, and because a crazy guy threw a bike at him and made him crash his Harley. Plus he adopted two Chinese orphans who have brain tumors, so he can’t be that bad. After you hear that it’s hard to really hate him, unless you’re an animal or a tree or something. So I doubt somebody said “this prick gave money to Rick Santorum, just wait til’ you see how shitty we made the DVD cover!”

Anyway, it’s okay. I think he works good as an under-the-radar actor.  I feel like I got my money’s worth out of this one, but I don’t think I can recommend it to most people. If you haven’t seen the original you should see it, and if you have seen it you’ve already seen it. The slick digital photography here looks really good and I guess it was filmed in a part of Australia where a feature has never been shot before. But the original was even more beautiful, and I prefer that grainy ’70s film look. And let’s be honest, so do you.

The movie is dedicated to the memory of Colin Eggleston, director of the original. If you’re paying attention you’ll also notice a hotel called The Eggleston Hotel. So, wait a minute. Carla, when she correctly suggested that they should stay at the hotel instead of sleep in the car, wanted to go back to Eggleston. As if she’s saying to go back to the original version, instead of the remake. Hmmmm.

Australian cinema Everett De Roche Jamie Blanks Jim Caviezel killer animals remakes
This entry was posted on Saturday, October 30th, 2010 at 3:35 am and is filed under Horror, Reviews. You can follow any responses to this entry through the RSS 2.0 feed. You can skip to the end and leave a response. Pinging is currently not allowed.