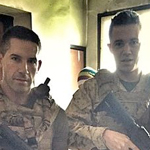 Well, I’m not sure “interesting” is a word I’d use to describe JARHEAD 3, but it’s not bad. Charlie Weber (CRUEL INTENTIONS 3, VAMPIRES SUCK) plays Albright, a pretty new but promising young Marine assigned to defend a U.S. Embassy. Adkins plays his Gunnery Sergeant Raines, who the men think of as a Buddha of the Marines. We only know this because PR department interviewer Blake (Dante Basco, who I know as one of the stars of FUNK BLAST, a movie ride that once existed at Seattle’s EMP, and you know as Rufio from HOOK, and we all know as Pinball from BLOOD AND BONE) says so. I wish there was more in the movie to back it up. END_OF_DOCUMENT_TOKEN_TO_BE_REPLACED Then one day mysterious troublemaker Simon Keller (John Cusack from THE PAPERBOY), a grown man who seems to already know how to drive, takes a lesson from him. After an uncomfortably horrible drive and awkward coffee break in which the stranger admits to being a fan and knowing all about his career, he convinces Peter to drive him to the bank. So he can get some cash to pay for the lesson, he says. But then he comes out holding a brief case and exchanging gunfire with security guards.
END_OF_DOCUMENT_TOKEN_TO_BE_REPLACED