THE HIT LIST is a DTV suspense thriller with a great, almost Larry Cohen type premise: 2 drunk guys in a bar commiserate over their shitty days; one claims to be a hitman, the other plays along and writes down on a napkin the five people he’d like dead. And then of course, in the hung over haze of the next morning, he finds out that #5 on the list, the boss that passed him over for a promotion, has been assassinated. Oh shit. So he has to put the kibosh on this thing, if not immediately then at least before the motherfucker gets to #1 on the list. I mean yeah, he caught her cheating, but he doesn’t want his wife dead. They haven’t even tried counseling. 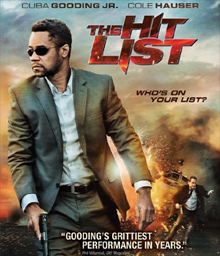 I saw the trailer for this on some other DTV movie and I thought it looked potentially good. I’ve also had it recommended to me by a couple people. The only thing that slowed me down is that the assassin is played by Academy Award winner Cuba Gooding Jr. And the cover made me laugh. I guess it’s probly trying to look like MAN ON FIRE, but it makes me think of the cool grey suit Junior’s JERRY MAGUIRE co-star wore as a similar character in COLLATERAL. I heard they went to Jonathan Lipnicki first but he turned this role down.

I think I gotta reconsider my assumptions about Junior though. He was good as a totally different hit man character in that nutso Lee Daniels freakout SHADOWBOXER, and he’s good in this one. As this hit man, Jonas, his eyes look tired and cold while his posture is confident, like he’s a killing machine who doesn’t give a shit anymore but can’t override the programming. He’s a little bit like Denzel in TRAINING DAY too, very good at browbeating and bullying while acting like he’s your buddy. But he kind of is your buddy. I didn’t want him to kill these people, but I kind of rooted for him to get away. I liked him.

The author of the titular list is Allan, played by Cole Hauser (too bad he doesn’t go by Wings Hauser, Jr.), who I enjoyed playing a similar regular-guy-pushed-to-the edge-by-high-concept in PAPARAZZI. He’s a good balance of Hollywood leading man and regular guy, believable enough as an office worker who gets fucked over but also as the (currently blowing it) husband of a gal that looks like young Catherine Zeta Jones (Ginny Weirick). He sports a cut under his eye from some guys he owes money to, so he’s down to earth.

Allan has to run around town – Spokane, Washington to be specific, a weird choice – trying to talk sense into Jonas and also to not be blamed by the cops who are on the trail of these murders and know that he’s connected. And Jonas makes things worse by forcing him at gunpoint to come along with him and do shit. In most movies everybody picks up guns at this point. I like that this guy doesn’t want to become a killer, and avoids it for as long as he can.

The police, I noticed, seem to be trying a little harder than some movie police. They check for cell phone and internet activity, things like that. And they don’t jump to a stubborn conclusion that he’s guilty. They listen to what he has to say.

You’ll see in the very first scene that Jonas has a case of Movie Cough, which sadly has no cure, it is always terminal. When we find out how this ties in with his sudden change in attitude toward killing for The Man it’s a pretty current issue that I don’t think I’ve seen mentioned in other movies. But I’m more interested in an angle that I could easily be reading too much into. Let me explain through the medium of spoilers.

When Jonas wakes up in a hotel room in Seattle feeling like shit and not wanting to assassinate the guy he’s supposed to assassinate he turns on the TV and sees a Bill O’Reilly type blowhard delivering a rant against gay marriage. We later hear on the news that the guy from TV was murdered. While they’re getting to know each other in the bar Jonas admits to Allan that he was the one that killed the guy, “for personal reasons.”

Is it too much of an assumption to think that this means Jonas is gay? After all there are a million topics the O’Reilly guy could be going off on to make it clear that he was an asshole. It’s weird that it singles out his opposition to gay marriage if it doesn’t have some special significance. But other than that there’s nothing to imply he might be gay, and even a part where he makes a seemingly homophobic comment (“What is this, a fag bar?”). But I like to think that he’s gay and that his country’s denial of his basic right to marry is one last hypocrisy straw on the back of the willing-to-kill-for-his-country camel.

The director, William Kaufman, did one last year called SINNERS AND SAINTS that I’ve heard is good too, but it doesn’t officially come out until January. His next one is called ONE IN THE CHAMBER, and stars Junior again along with Dolph Lundgren. I won’t give away which one of them is playing a Russian.

This is a solid DTV thriller. I’d like to think it’s just more proof of my belief that we’re experiencing the start of a DTV golden age, but it could also just mean that I shouldn’t write off all these movies that Cuba Gooding Jr. comes out with all the time. I think I’m gonna have to stick with the first one though, ’cause the second one has alot of scary implications (mostly involving me watching a bunch of potentially crappy Cuba Gooding Jr. movies just to be sure).

Cole Hauser Cuba Gooding Jr. DTV William Kaufman
This entry was posted on Monday, November 14th, 2011 at 1:50 am and is filed under Reviews, Thriller. You can follow any responses to this entry through the RSS 2.0 feed. You can skip to the end and leave a response. Pinging is currently not allowed.