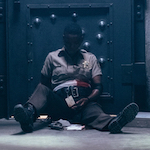 I guess he’s more anti and less hero in this one. It’s clearly a modern western, and if it’s THE GOOD, THE BAD AND THE UGLY he sure ain’t the good. But his main motivation throughout the movie is to warn his ex-wife and daughter that they’re in danger, so how could we completely hate him? He plays Teddy Murretto, a Vegas (or Reno?) fixer on the run with a bag of something valuable. On foot with time running out, enemies closing in and nowhere to go, he punches a random cop so that he can hide out in a jail cell.

The random cop is Valerie Young (Alexis Louder, “Nigerian Woman #2,” BLACK PANTHER), a small and dry-witted rookie whose colleagues, including chief Mitchell (Chad L. Coleman, CARLITO’S WAY: RISE TO POWER, The Wire) seem to recognize she outclasses them. The way she puts her glasses on with one hand after unnecessarily tasing Teddy makes for an act of police brutality with hard-to-deny comic timing. 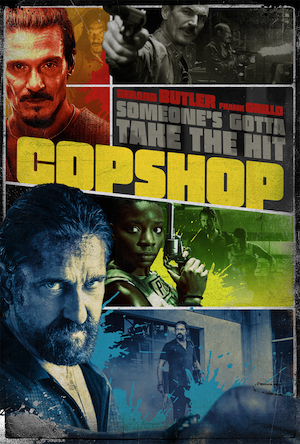 But Teddy’s pursuer sees the whole thing go down, so shortly thereafter a mysterious John Doe – hitman Bob Viddick, played by Gerard Butler (DRACULA 2000) – is brought in stumblingly drunk after ramming a police cruiser. Butler’s mumbling incoherence and lack of balance make for one of his more entertaining performances, and since the officers claim he “smells like Satan’s asshole” and like “he shit himself” we can only guess how method Viddick is in this type of performance. (I was disappointed that no one is horrified by the stench in the later parts of the movie.)

It’s an action thriller built around a contained location – the Gun Creek Police Department headquarters. These two are locked in cells across from each other. Viddick obviously has some things up his sleeve (including a plan to get out), Teddy tries to get Valerie to give him his phone to call his ex, or to lie or persuade Viddick to leave her alone, or to let him out. Meanwhile, we can see that one of the officers, Huber (Ryan O’Nan, THE ICEMAN) is a traitor, and others may be too. And then a rival hitman who may be worse than Viddick shows up. Whatever happens we want Valerie to get out of there alive, so it’s troubling that she’s so insistent on doing her job.

I had completely forgotten until late in the movie that upon release Grillo posted on Facebook that the movie had been taken out of Carnahan’s hands. “Without detail, I’ll say I gave a much more 3-dimensional take that was very colorful and very well planned out… The cut my boy, brother, and partner made had my performance intact. Unfortunately, our cut was passed over for this cut.”

Speculation at the time was that Butler had pushed his weight around for a re-edit, a theory fueled by Carnahan posting a thank you to just about everyone involved in the movie except for Butler. When Grillo commented in support, Carnahan replied, “My man. Only you really know the top to bottom of what happened and we’ll leave it there. All love.”

Whatever the battle was between the two marquee stars, they both come across well in terrible-person-you-kinda-like roles that work well for them. I think Butler is best as these sweaty grunting guys, Grillo gets to alternate between cool and buffoon, and the lack of honor in both characters allows for the plot to keep us guessing. 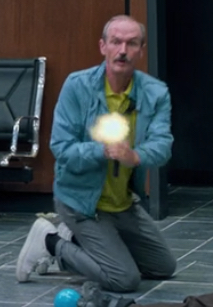 And while both of them should be proud to be in the movie there’s also room for two actors whose names do not appear on the poster to shine just as much or more than them. One of those is Toby Huss, known to people of my generation for playing Artie on The Adventures of Pete & Pete, singing on MTV promos and voicing Cotton and Kahn on King of the Hill. It was a brilliant idea to cast this lanky oddball as the most evil person in the movie, Anthony Lamb. He makes sarcastic chit chat while waving his rubbery limbs around firing hundreds of 9mm rounds into cops and two EMTs. He’s dressed in a retro style somewhere between Hunter S. Thompson and an embarrassing dad on vacation, he brings up THE LAST SAMURAI while making fun of Teddy’s manbun, and he name drops lesser known FAST & FURIOUS franchise star Elena Pataky (Rio police officer and Dom baby mama Elena), but in reference to her being married to Chris Hemsworth. He’s just so entertaining and seems like a genuine threat until he loses his gun, at which point he’s overpowered and ends up pathetically whimpering last words that nobody understands.

The other smaller name is of course the heroine, Louder, who was in HARRIET, Watchmen and The Good Lord Bird, but will really pop off here for anybody who sees the movie. It’s always clear how much smaller she is than everybody also, but the size of her attitude makes her seem like not that much of an underdog. Despite her rank it seems charitable how tolerant she is of her dumbass colleagues, including Officer Pena (Jose Pablo Cantillo, who I always remember as “Snowflake” from REDBELT).

This is obviously a movie that has fun fetishizing guns and has a cop as its only hero, things action movies have always done that I have grown to be less comfortable with. Carnahan clearly enjoys those elements, but I don’t think he uses them unquestioningly. Whether or not he went looking for a Black woman to play the hero, I’m sure it occurred to him that it would take away some of the stigma cops have in 2021 and make her easier to root for. And having another Black female cop (Tracey Bonner, Trapped in the Closet, DEN OF THIEVES) as a villain is a way to say that just changing the race and gender of the people in the system doesn’t fix the system.

Though the tone of the thing is somewhat of a cheeky romp, the rapid picking off of the characters doesn’t exactly come across as glamourous. Valerie and Pena are both fixated on westerns and cowboy shit, but it’s Valerie’s ability to perform an emergency tracheotomy that seems to impress both of them most. (“That was fuckin bad ass!” Pena says, awe struck.)

The siege at a jail in the desert is obviously a western trope, and this particular set is designed to be a good location for a big shootout. But consciously or not it ends up painting a suitably biting portrait of what our tax dollars pay for. Here is this state of the art fortress out in the middle of nowhere, staffed by one heroic rookie, one murderous traitor and a bunch of bungling idiots who mostly turn a blind eye to and/or participate in a web of corruption involving politicians, cops and organized crime.

Even the hero is dumb enough to play quick draw games with real guns while on duty and (much to her embarrassment) manages to shoot herself during the actual gunfight. And in the end (SPOILER) I believe she’s chosen to kamikaze herself just to take out one replaceable cog of the corrupt system rather than go home to the unseen spouse she loves.

Not that any of this seems intended to be taken very seriously. Most of the main characters are your standard members of the elite assassin community. There’s alot of funny/dumb banter, with Valerie usually coming out on top. There’s a weird conceit that “Freddy’s Dead” (original Curtis Mayfield version) is always playing on the radio. It’s a great, but kind of overused song, but it’s kind of cute to see a split screen of Valerie and Viddick separately singing along to it.

I think Carnahan shares my preference for ‘70s music, because he also uses Lalo Schifrin’s MAGNUM FORCE theme for the opening credits. They also use a few DIRTY HARRY cues, and composer Clinton Shorter (DISTRICT 9) works in a little Schifrin-eque bass. It was probly a correct assessment that a modern composer trying to get a MAGNUM FORCE feel would end up with something too smooth and forced (studio musician wah-wahs and horn lines would likely be involved), but I guess it still makes me sad if we’ve given up ever trying. There are people who know how to funk still.

I can’t quite call this a meat and potatoes movie, because that implies a dish not served with this much flair. But its appeal is proudly lowbrow. I appreciate the inventive violence. It’s not everyday you see somebody get their taser wounds pepper sprayed, or gets a knife through their hand and then uses it to slash a throat. If that sounds like a fun time to you, you know what to do.

Alexis Louder Chad L. Coleman contemporary western Frank Grillo Gerard Butler Joe Carnahan Jose Pablo Cantillo Kurt McLeod Ryan O'Nan Toby Huss Tracey Bonner
This entry was posted on Monday, December 20th, 2021 at 7:13 am and is filed under Action, Crime, Reviews. You can follow any responses to this entry through the RSS 2.0 feed. You can skip to the end and leave a response. Pinging is currently not allowed.