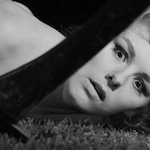 It’s got a great opening – John Haloran (Peter Read, THE BRAIN, TALONS OF THE EAGLE) is upset one night, wants to row out onto the lake to be by himself, but his wife Louise (Luana Anders, THE YOUNG RACERS, NOWHERE TO RUN) comes with him and bickers with him about money. His mother is sick and plans to will her fortune to charity – Louise wants him to talk to her about putting him in the will. All the rowing gets his heart worked up and he collapses. She goes for his heart pills (apparently this happens alot) but the container is empty, and he dies.

It’s certainly contrived, but very economical, the way he already teased her that she needed him to be alive to inherit anything. But, treating his death as an inconvenience rather than a tragedy, she immediately goes about disposing of his body, faking that he left on a business trip, and going alone to a Haloran family get-together in London to try to get her way. She does a more detailed cover up than seems necessary to the plot – hats off to her.

I love the atmosphere of that boat scene, taking place in practically a black void, with the sounds of water sloshing and a rockabilly song (“He’s Caught” by Buddy and the Fads) playing on John’s portable radio until it sinks into the lake with him.

In PSYCHO, Marion is embezzling money from work, but she still comes across as a nice girl. Louise does not come across like a nice girl, and I enjoy that about her. She’s just so brazen and shameless, she’s fun to watch. The funny thing is it’s kind of more ghoulish that she didn’t kill him! If she did it would be a normal type of evil plot. But she’s not a murderer, just a liar, who clearly really did just marry this guy for the money he doesn’t actually have. 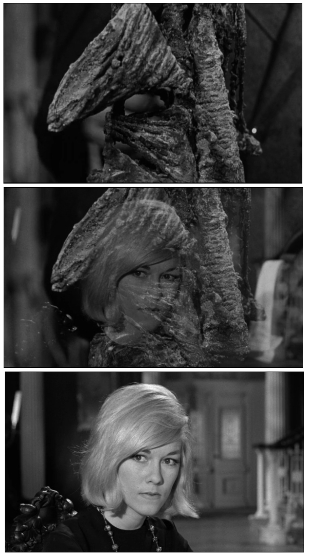 I got a little confused because there are two blond American fiancees. The older brother Richard (William Campbell, LOVE ME TENDER, BLACK GUNN) plans to marry Kane (Mary Mitchel, SPIDER BABY), against the wishes of Mother (Eithne Dunne, SHAKE HANDS WITH THE DEVIL). I should’ve noticed she was different because her hair is different – Louise has the angular bangs that sort of match up with one of Richard’s abstract metal sculptures when Coppola dissolves to her from one.

There are lots of odd things going on with the family. They’ve gathered to commemorate the loss of a younger sister named Kathleen who drowned in the lake when they were kids. Lady Haloran wants immediate family only at a ceremony at Kathleen’s grave, but Louise is watching from a distance when the old lady faints, having seen her flower wilt when it touched the tombstone. Louise swoops in to take over walking her to her room and comforting her (it’s unclear why she’s more qualified for this than the sons), which finally gets her in Mother’s good graces.

But like I said, Louise is an asshole, so her plan is not only to gain the Lady’s trust but to fuck with her head, sneaking some of Kathleen’s dolls out of the house and planning to use them to stage more supernatural occurrences. At this point I gotta SPOILER – there is a huge shock when Louise is in the middle of carefully setting her plan into motion. We watch her sneak out to enact some scheme, tie something to the dolls, strip down to her underwear, dive into the lake… and come across a body (a little girl?) underwater! And then, as she resurfaces in terror, there’s a dude with an ax who chops her up! I mean, obviously killing off the ostensible lead was inspired by PSYCHO, but it’s still a very well executed sharp left turn. And for modern viewers it’s one of those moments where the black and white and the acting style have made you feel comfortable that it will be a certain old timey type of horror, so you’re caught off guard when it goes way harder than that.

So there are several mysteries here. Is the ghost of Kathleen haunting the place? How did she actually drown? Who is the ax murderer? And who else is scheming for the inheritance? Patrick Magee (BARRY LYNDON) plays the family doctor who gets suspicious and tries to figure out what’s going on. There’s some Norman Bates shit and some Scooby-Doo shit and some gothic castle shit. And it’s nicely photographed and swiftly paced, running only 69 minutes in the recently released director’s cut (75 in the previous home video version). It’s no BRAM STOKER’S DRACULA, but I dug it. 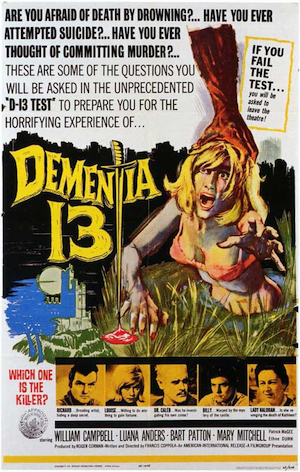 I enjoyed it as a young-and-hungry-Coppola-trying-to-prove-himself-while-working-for-Roger-Corman movie, but I was even more impressed when I read more specifics. When Corman finished filming THE YOUNG RACERS in Ireland, he had $22,000 of budget left over and wanted to stay and do a quickie horror movie there. But he decided it didn’t work with his schedule so he asked his young sound man Coppola to do it, telling him to write a script kind of like PSYCHO. So he did, coming up with a treatment overnight and a script in three days, with uncredited help from Al Locatelli, art director for both films. Coppola also nearly doubled the budget by pre-selling the European rights behind Corman’s back.

The rookie director convinced YOUNG RACERS stars Campbell, Magee and Anders to stick around to star in another movie, with the cast rounded out by Irish actors from the Abbey Theatre and some of Coppola’s UCLA friends, who paid for their own flights so they could be in a movie. They filmed for 9 days.

Corman let Coppola shoot what he wanted, but was unhappy with the results, so he added some voiceovers and new scenes shot by Jack Hill and Monte Hellman (up-and-comers who, like Coppola, had directed parts of THE TERROR). Hill did a new beheading and Hellman did a William Castle style prologue with an actor playing a psychiatrist testing the audience to make sure they’re psychologically fit to watch the movie.

I read that DEMENTIA 13 was the b-picture that played in double features with X: THE MAN WITH THE X-RAY EYES. Man, that’s a good double feature! I might’ve watched them back-to-back if I had known that.

Reshoot directors Jack Hill and Monte Hellman of course became notable filmmakers in their own right. The year Coppola had THE GODFATHER Hill had THE BIG BIRD CAGE and Hellman had just done TWO LANE BLACKTOP.

Assistant art director Eleanor Neil hit it off with Coppola, they started dating and got married the following February. They are still married today, and she’s known for co-directing HEARTS OF DARKNESS: A FILMMAKER’S APOCALYPSE with George Hickenlooper. She’s also directed more recently than her husband, with LOVE IS LOVE IS LOVE in 2020.

I didn’t know this, but there was a remake of DEMENTIA 13 released in 2017. It would be cool if it was a shot-for-shot remake of the original in order to count as a rip off of the remake of PSYCHO, but judging from the trailer it seems to start out faithful but adds a slasher mask and more chasing and chopping. It didn’t seem to get much of a release, and only has 3 reviews on Rotten Tomatoes, but one of them, by Kimber Myers in the Los Angeles Times, calls it “an enjoyably cheap little gift” and “a capably made indie that should please genre fans searching for a haunted diversion.” Those quotes describe the original pretty well too.

Francis Ford Coppola Jack Hill Mary Mitchel Monte Hellman Patrick Magee Peter Read Roger Corman William Campbell
This entry was posted on Tuesday, November 30th, 2021 at 7:03 am and is filed under Horror, Reviews. You can follow any responses to this entry through the RSS 2.0 feed. You can skip to the end and leave a response. Pinging is currently not allowed.