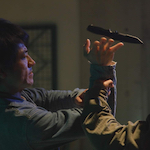 HYDRA (2019) is a modest Japanese crime movie that I enjoyed for its simplicity. It begins harshly, with a very efficient killing and disposal of a guy in a public restroom. The very human detail that the victim can’t stop peeing as he’s stabbed and dragged from the urinal to a stall ups the disturbing factor by about 150%. And that’s before we see a man wearing tight swimming trunks (Takashi Nishina, GAMERA 3: REVENGE OF IRIS) so he can chop up the body and then hose himself off before giving a few chunks as treats to his piranhas. Seems like he’s got the process down pat.

They have a whole system, because this is some kind of organization that murders crooked cops. Reading other people’s reviews maybe this is a vigilante anti-corruption kind of thing, but I got the impression from the dialogue that it was more like a coverup, getting rid of the guys who go so far they become liabilities.

Our main character Takashi (Masanori Mimoto, YAKUZA APOCALYPSE, MANHUNT, ENTER THE FAT DRAGON, also one of the choreographers of this film) was raised from childhood to be one of those killers, but now he works as a chef at a tiny little bar/restaurant in Tokyo called Hydra. Yeah, maybe you’d guess Hydra would be the name of the scary murdering organization, but that’s “Tokyo Life Group Ltd.” Hydra is just a cute little hole in the wall where you can get fancy beer and a good meal. 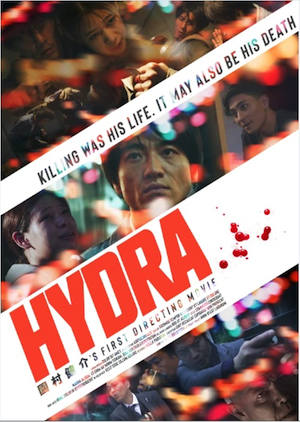 Hydra is owned and bartended by Rina (Miu, no other credits), a friendly young woman who inherited it from her father. Hipster waiter Kenta (Tasuku Nagase, Shion of the Rudeboys in HiGH&LOW: THE MOVIE) has a crush on Rina, and seems to think Takashi (who scares the shit out of him) is his competition. But Takashi is actually watching her protectively, due to a vow he secretly made to her father before he died. At Takashi’s hands. Long story. He also looks out for the customers, noticing things from his little kitchen in the back that the others miss.

It’s kind of portrayed like a Particular Set of Skills, but also those kids need to pay more fucking attention! Takashi is the only one to notice that one of their businessman regulars keeps putting date rape drugs in his dates’ drinks. Takashi swoops in to carry a drugged woman to safety, and gives the perpetrator I cold “I know what you did, motherfucker” stare, but frustratingly doesn’t do anything to hold him accountable.

The beginning of the movie uses stillness and quiet in a way that kinda reminded me of Jim Jarmusch. It’s interesting to see a movie with some martial arts in it that never seems eager to be cool and fast paced. (At the same time, it doesn’t wear you out, running only 77 minutes.) The section that’s mostly contained to the bar has kind of a cheap, almost soap opera look to it, but to me it’s still the stuff that makes the movie compelling – this little family of co-workers, two of them young, one older and with way more life experience, bonded by spending shifts together in this little place, dealing with the same regulars, for good and bad. You don’t really see that co-worker dynamic in action movies usually, unless it’s cops or hitmen.

I like how when they’re all gonna go out together after work we suddenly see that Kenta wears a flamboyant overcoat and fedora that made me think of him as a different kind of guy than I realized when he was in his work clothes. It really captures that feeling of seeing a co-worker in a different setting for the first time. And he and Rina are in awe of Takashi for things he does on the job, like choosing the perfect dishes for people and cooking them from recipes in his head (badass juxtaposition). Just wait until they find out what else he can do.

Of course he gets pulled back into his violent past. There’s not a huge amount of action, and it’s mostly simple one-on-ones – knife fights and scuffles – but the down-to-earth understatedness of the whole thing, contrasted with the outlandish gruesomeness of the opening murder, is part of the whole vibe I like about the movie. When fights do happen they have a really cool style with extremely fast movements punctuated with sounds of whooshing air and shifting clothes. Lots of really precise hits, strategic grappling, and a sense that they’re going really hard at each other. And they never waste any energy talking – they just get down to business. One of the fights is against a guy who who’s in his underwear brushing his teeth when he jumps him, who uses the toothbrush as a weapon. I believe he’s played by one of the other choreographers, Naohiro Kawamoto (GEISHA ASSASSIN).

Also doing choreography is director/editor Kensuke Sonomura, making his directorial debut. He’s a veteran of many Japanese films, including THE MACHINE GIRL, GANTZ and BUSHIDO MAN, but I’m most impressed that he choreographed the action for John Woo’s MANHUNT. That’s the one I would brag about.

HYDRA was released in the U.S. as “A Hi-YAH! Exclusive.” That’s the “the martial arts channel” streaming service which I believe is owned by Well-Go USA, because it’s mostly modern Asian cinema that’s available on disc or will be soon, but it’s lots of good stuff in one place for three bucks a month – I should probly do it. Anyway, they have “exclusives” that are available on there first and then they release them on Blu-Ray and DVD (you see that, Netflix? like you should be doing with THE NIGHT COMES FOR US) and this is one of them.

Hi-Yah! Exclusive Masanori Mimoto Naohiro Kawamoto Takashi Nishina Tasuku Nagase
This entry was posted on Monday, November 29th, 2021 at 7:03 am and is filed under Action, Crime, Martial Arts, Reviews. You can follow any responses to this entry through the RSS 2.0 feed. You can skip to the end and leave a response. Pinging is currently not allowed.