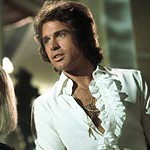 As part of my striving for excellence I’m trying to strengthen my background in the filmatic arts. I’m always trying to catch up on the Badass Cinema that I’ve missed, but it’s also important to watch some of the regular folk movies that are considered classics. MCCABE AND MRS. MILLER is no THE GODFATHER or nothin but if you talk to film buffs alot of times they have a boner for Robert Altman, and this is one of the movies they all mention. Before POPEYE.

I was honestly able to watch it without having a clue what it was even about, which is always good. It turns out it’s kind of a hippie western. Not in a psychedelic EL TOPO kind of way but in the way that

The style is the usual Altman style, alot of the dialogue seems improvised and very naturalistic and the people talk over each other and mumble sometimes. There’s one scene where Warren Beatty sits and burps and mumbles to himself for about 3 or 4 minutes, I betchya that scene was improv.

The movie takes place in the Old Pacific Northwest and basically is the story of It’s Hard Out West For a Pimp. It’s funny because at one point McCabe (Beatty) puts on a giant fur coat and he’s wearing a bowler hat and I said, “ha ha, he looks like a pimp.” And it was the same scene where you find out that yes, in fact, he is buying some hoes which he is using to set up a brothel.

It’s a different kind of setting for a western, real dirty and lived in, with more vegetation and cold and not just some generic saloon out in the dust. It looks like a real town and it’s definitely not on a soundstage. There’s even snow for the climax of the movie although it’s kind of distracting because it’s obviously fake, superimposed over the footage. Every time they change camera angles the snow is still floating toward the right side of the screen. Which, in my opinion, is scientifically inaccurate. This movie is not designed for climatologists or precipitation theorists.

The Mrs. Miller in the title is Julie Christie, some lady who comes down from Seattle with some hoes of a much higher quality, and shows rich boy McCabe with his giant fur coat how to invest his money to make a much better whorehouse than his pathetic little tents. She knows her shit and helps him to create a high quality independent establishment. Unfortunately, big business in the form of the Sears company wants to buy the land to use for mining, and tries to buy McCabe out. Even though they’re Sears, just imagine they’re Wal-Mart, that is the type of situation we’re talking about here. McCabe turns them down so they send a tall dude to kill him. He’s not a fighter, he’s a business man, so he tries to charm the guy and make a deal with him and when that fails, the last 20 or 30 minutes of the movie is mostly a quiet chase through the snow.

People say this is not a western, but fuck that. It’s in the old west, they got cowboy hats, they got guns, they got horses, there’s a shootout, there’s whores. And opium, always a plus. So it’s a western. Of course it really stands out from other westerns because of the different style of acting, the music and the beautiful photography. There’s also alot of little funny bits with the supporting characters, like a guy who talks about whether or not to shave off his beard and another guy who turns out to be the whorehouse’s best customer. Most of these old boys have the mentality of little kids, so they talk about some pretty hilarious, stupid shit and not just standard old west business.

Not a bad movie in my opinion.

Julie Christie Robert Altman Warren Beatty William Devane
This entry was posted on Tuesday, May 16th, 2006 at 12:50 pm and is filed under Drama, Reviews, Western. You can follow any responses to this entry through the RSS 2.0 feed. You can leave a response, or trackback from your own site.

One Response to “McCabe & Mrs. Miller”