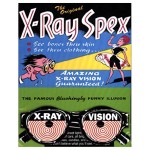 So I turned to the American Movie Classics channel where my first classic was X directed by Roger Corman. This is the story of Dr. Xavier, who invents eyedrops that would kill a monkey but would make a man have x-ray vision. Yeah so Superman has that power plus he can fly but what the hell man, one power is pretty impressive too. Xavier uses the drops on himself, does some surgery, kills a man, and goes on some x-ray adventures.

Now I think every man has decided what he would do with this power and Xavier does some of the best ones. First he’s real idealistic, saying he’ll use it to help people as a doctor and hell, he does. But it’s not too long before he starts moving on to the more obvious ones. One of the best scenes is where he’s at a party and realizes that everyone looks naked to him. Of course they don’t show anything important but I don’t know man, there’s something sexy about a bunch of hot ’50 gals twisting around with bare backs. And then he starts talking up his co-worker gal, “I like that birthmark above your third rib.” The guy’s kind of dense though and doesn’t realize what it means when she doesn’t get offended.

Next on the list, the old carnival hustle. He calls himself “Mentallo” and he and Don Rickles get paid because he pretends to read people’s minds (he’s really looking in their pockets). After that they open up their own business just diagnosing people: “Hey lady, you got a tumor. Donation?”

Unfortunately that’s about all he manages before he goes crazy. He never really tries the naked women thing on a wide scale or uses his access to secrets to commit crimes or play pranks. But if you think about it, the lack of success he has with this thing is kind of more realistic ’cause I mean this kind of shit never lives up to expectations.

I have decided after seeing this picture and giving it some thought that if I was offered x-ray vision, I would have to refuse it. Even if you didn’t go crazy from it, how would you watch movies? How would you Write about them if you keep seeing right through the computer screen? Dr. Xavier is already a doctor so he doesn’t have to worry about it, but how are you gonna read books when you keep seeing through to the next page? Even if you can figure out how to read a whole book you KNOW you’re gonna end up reading the ending before you get there. So you better get those book smarts taken care of BEFORE you get the x-ray vision.

Even the nudity thing would have drawbacks. There are some people you see on the street that you just don’t want to see naked. I think you know who I’m talking about. And I mean even some women, they could really be something with the clothes on, but what if the actual items are disappointing, and kill the fantasy? I mean personally I am not into this shaving off the pubic hair deal and if some gals do it, I’d rather not know.

I hope I have convinced you if not that’s your perogative man good luck let me know how it turns out.

Ray Milland Roger Corman
This entry was posted on Saturday, January 1st, 2000 at 4:34 pm and is filed under Horror, Reviews, Science Fiction and Space Shit, Thriller. You can follow any responses to this entry through the RSS 2.0 feed. You can skip to the end and leave a response. Pinging is currently not allowed.

One Response to “X: The Man with the X-Ray Eyes”