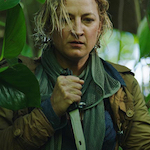 Bell stars as Avery Taggert, an award winning war photographer. When it opens she’s receiving one such award. She seems ambivalent about her career and life as she gets drunk at the hotel bar with her manager/friend (Kevin Pollak, END OF DAYS), but he convinces her to, rather than go home and rest like a normal human, fly to Colombia the next morning to embed with a group of missionaries through the jungle.

It’s a small group of mostly young idealists delivering supplies to remote villages. Their leader is a goofy, talkative Spaniard named Guillermo (Nacho Vigalondo, director of TIMECRIMES and COLOSSAL) who seems very big on self-promotion and likes to call himself “El Guero.” He considers himself a revolutionary, talks about “the people” all the time, has everybody practice target shooting, and starts an uncomfortable conversation with Avery about making sure she wants to show “the truth” in her photos. Of course she does, and of course she knows that he’s trying to pressure her to do something else. But she seems well practiced in getting out of these types of discussions. 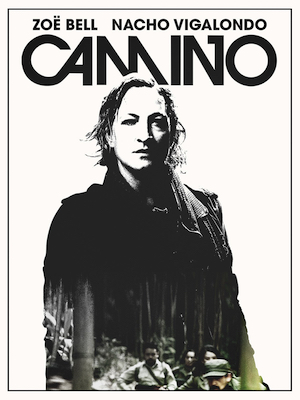 In most respects Guillermo seems like a harmless doofus, but it’s possible his awkward jokes and comments are meant as threats, like he wants you to notice he’s being too light and worry what he’s covering for. For example when they get to the village to hand out supplies, offer medical help and pat kids on the head, he just cannot stop pointing out that they are armed and not to worry about it because they’re only here to help. Is he being an idiot or being a bully? I really don’t know!

But it’s not surprising to us when we see that this whole thing is a cover for him to sell somebody big bags of coke. Avery gets a photo of the transaction, so maybe that’s what this is gonna be about – she has the proof of his crime, so he has to eliminate her.

Well, yeah, but it’s a worse crime Guillermo is worried about: when he realizes that one of the kids from the village witnessed what he was doing he kills the kid and Avery gets a picture of that too. And then Guillermo sees her. The real kicker is that he can’t just tell the rest of the group “she knows, we have to get her,” because it turns out they’re not in on his coke dealing. So instead he brings the kid’s body back and tells everybody that she did it. “The journalist.” And he wants justicia so he sends his overzealous trained-by-the-CIA ex-cartel psycho guy (Dominic Rains, the pimp from A GIRL WALKS HOME ALONE AT NIGHT, also in MASK OF THE NINJA) after her.

So most of the movie is this simple set up – Avery is alone, trying to make it to civilization, trying to survive. She’s very tough, having done this job for a while, but the movie is meant to be gritty and realistic, so her fights are long, exhausting struggles. I always like when an action character defends themselves with an instrument of their chosen non-violent art, so I’m glad she uses her camera strap at one point. It would also be cool if she used a flash to blind somebody, but I think she’s more of a natural lighting type.

Some of the missionaries immediately recognize that Guillermo’s claim that Avery killed the kid makes no sense, and they try to figure a way out of this mess. Marianna (Sheila Vand, the GIRL who WALKS HOME ALONE AT NIGHT herself!), though, has seemed suspicious and jealous of Avery since she met her, and is very ready to believe the worst.

But it’s mostly about these two central characters going to war. It often reminds me of FIRST BLOOD, though of course it’s much lower budget and it lacks that aspect of two men dragging everyone else into their bullshit because they’re too stubborn to back down. Instead the character drama is more about what Avery is going through in her life, having (you guessed it) lost her husband and not having figured out what to do with herself since. I know this grieving thing has been done to death, but I think it’s well handled here, the way it parcels out the information of what she’s gone through. I like that she has conversations with her dead husband as she gets more stressed and there’s a pretty cool idea about a (SPOILER) personally meaningful roll of film that she carries with her and has to lose in order to survive and help others.

The DVD has some making-of stuff on there which was pretty informative. As you might guess, it was a very guerrilla production that director Josh C. Waller (McCANICK) conceived and sold but the financers misunderstood and thought he already had a script so he and screenwriter Daniel Noah (BELIEVERS) had to write it in two days.

Then in the middle of shooting it turned out Bell had to leave for HATEFUL EIGHT, so they took a break for five months, and that meant they also had to reshoot some of what they had because two of the actors were no longer available. So it turns out the opening where we hear but don’t see Avery accepting her award was not just a money saving stylistic choice – it’s because they filmed that scene with Pat Healy, who was now being replaced by Kevin Pollack.

I knew I recognized Waller and Noah’s names – turns out it’s because they’re Elijah Wood’s partners in Spectrevision, so they’re producers on A GIRL WALKS HOME ALONE AT NIGHT, MANDY, COLOR OUT OF SPACE, etc. The other movie directed by Waller that I’ve seen is RAZE (2013), which also starred Bell, along with Rachel Nichols, Tracie Thoms and even Amy Johnston, before I knew who she was. From what I remember it was a well made film but I did not enjoy it because it took the always fun format of the fighting tournament and intentionally made it absolutely no fun, because it’s about women who are kidnapped, held in dreary cells and forced to brutally beat each other to death or their families will be murdered. I’m sure the idea is to not glamourize violence, but then why make an underground fighting tournament movie? Do you think you’re exposing the ugly truth about the Kumite? It’s just mean to put that great cast in a fighting tournament movie that’s about how you should be ashamed for wanting to see them in a fighting tournament.

CAMINO has the same “action shouldn’t be cool, it should be disturbing” attitude, but it works much better because you can root for her to survive. You don’t have to root for her to kill someone who’s in her same situation she is. Or at least not all the time.

Though I personally would prefer a movie more open to having a good time, this is a strong role for Bell, showing off that rare balance of physical capability and acting chops that is always so thrilling. Of course she can handle wrasslin’ a guy, but also she’s good at this resilient but damaged character. For god’s sake give this woman a bunch of starring roles already! What are we doing here?

And then what really makes it work is putting her up against Vigalondo, who is not usually an actor outside of his own movies, but really does something memorable here, this mix of humor and bravado and nervousness that makes for a real despicable villain. He’s more scary for being amoral and pathetic than for being physically imposing, and that’s kind of novel. Also, what becomes of his character is very dramatic and satisfying in a way that’s completely different from what you’d get in the more normal genre stuff I generally prefer. So this is pretty good. I’m glad I finally watched this one.

Daniel Noah Dominic Rains Josh C. Waller Kevin Pollak Nacho Vigalondo Sheila Vand Zoe Bell
This entry was posted on Monday, March 15th, 2021 at 10:37 am and is filed under Action, Reviews, Thriller. You can follow any responses to this entry through the RSS 2.0 feed. You can skip to the end and leave a response. Pinging is currently not allowed.