Well, HOSTAGE is not a political movie but it is a Bruce Willis action thriller for the fucked up age we are currently being sat on by. In the DIE HARD pictures he fought terrorists, so now that terrorism is more of a realistic threat, he’s going back to fighting criminals again. But because it’s the Bush era, this is a dark, ugly, sometimes gorey thriller. A story about a bunch of psychotic, sadistic, greedy assholes terrorizing each other, and all the rest of us who get caught in the middle. A movie that wears a mask and has your wife and daughter tied and gagged in the back of a van and forces you to break your moral code and risk your life to get what it wants. It’s a real intense, well made thriller but what I’m saying is, this is 2005. Don’t expect to get blown through the back wall of the theater and have a good time and all that.

The movie opens a year ago, when Bruce had long gray hair and an ugly beard, and liked to absent mindedly comb his beard to show off that he really grew it for the role. After one bad day on the job as a hostage negotiator in Los Angeles, he decides to throw in the towel, shave his hair, move out to the suburbs and become chief of police. He wears glasses though so you know he’s a small town chief of police, not some asshole chief that yells at you and wants you in his office NOW. He’s buddy buddy with everybody. He’s a cool boss. 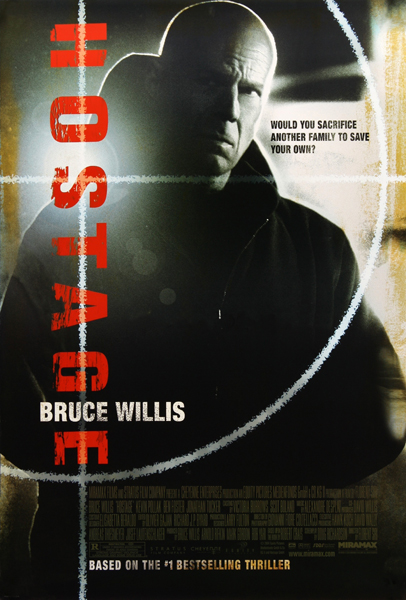 Some shit goes down though with three rebellious teenagers in a redneck style pickup truck. They get mad at a girl so they follow her family home to their mansion and try to steal their ESCALADE(tm) brand transportation machine, end up in a spontaneous home invasion, etc. These are 2005 style troublemakers, so they have a sort of fetishized Hollywood dirtiness, where they have long uncombed hair and spray on sweat and dirty Working Class clothes. The three dudes have 3 levels of bad-guyness. One is the little brother, so he has a conscience and tries to stop them from doing everything, and wouldn’t even be a bad guy if he just took the bus home instead of riding around with his stupid older brother Dennis and his friend Mars. Mars is top level bad guy, over the top nutbag with a traumatic past, sexual frustration and enjoys watching people die. Then the other guy Dennis is just medium bad guy, “this bowl of porridge is just right” kind of thing, so he gets to be the leader.

Next thing you know there’s some bodies, it’s a stand off, the house is surrounded by cops and Bruce is trying to talk them out but with more of a cold, tough stance due to his bad experiences one year ago when he had a beard. Now, sometimes in a DIE HARD or a DIE HARD ripoff, there is a point where it is out of the hero’s hands, he is safe and should go home and let the police take care of it, but instead he decides to hop on a helicopter or something and go after the bad guy and blow him up. That’s not Bruce in this movie. The sherriff’s department shows up and takes over, he wishes them luck and drives away. The end.

Well, no, that’s not the end. See then it turns out, funny story, the man of the house (comedian/Usual Suspect Kevin Pollak) is an accountant for organized crime and has an important computer disc hidden inside a DVD case. Could cause some problems, apparently. So some scary ski-masked mob enforcer types kidnap Bruce’s wife and kid and force him to go back, re-assume command and make sure nobody goes in or out of the house until “our people” get there.

A note about the DVD being used as the mcmuffin in this movie. If some time in the future I happen to write an action movie where Steven Seagal is an ex-CIA video store clerk who has to fight off a team of highly trained mercenaries searching for weapons codes on a disc that accidentally got returned to the video store, be advised that I came up with that idea BEFORE this movie, and I never even heard of the book. It is not a copy of this movie, no matter how much I like Bruce.

Another thing. In DIE HARD type movies, it is amazing how many human sized air vents there are in buildings, that you’re able to crawl around in. This family, because they are so rich, they have those type of vents in their own house. And the little boy Tommy, he knows how to climb through them and get anywhere in the house. (They make it more believable by making it his fort or clubhouse, with all kind of toys and an area labelled “BUG LAND” with magnetic letters. Because kids like bugs.)

So the kid gets away from the home invaders, calls up Bruce, and Bruce finds himself in the amoral situation of giving this kid advice while having a conflict of interest, that he needs to save his own family even more than he needs to save this one. Because he likes his alot. And then more complications keep happening, things keep getting worse, etc.

You know, come to think of it, you probaly saw the trailer and know all this anyway. Sorry about this review friends. One thing you don’t know from the trailer though: real good opening credits. It’s somewhere in between an old fashioned Saul Bass type credits sequence and modern show offy CGI bullet time type shenanigans. Good job on that one, designer people.

Anyway, Bruce is real good in this one, a grim and serious tough guy role. He’s friendly and peaceful in the beginning but then he gets Pushed To The Edge and has to do what he has to do. What’s nice though is that’s more about risking his own life than going apeshit on some motherfucker. Here is a BIG ASS RUIN THE ENDING SPOILER now. When the bad guys first don’t show their faces, they have Bruce look in the rear view mirror and see his wife and kid tied up and gagged in the back of a van. Then near the end of the movie there is a similar scene where Bruce tells Kevin Pollak to look out the window – and see that his children are alive and getting medical help, because Bruce just saved them. This is the scene that shows what my man Bruce is all about. The bad guys tell you to look and see that they have your family so you better do what they say or they’ll get killed. Bruce tells you to look and see that he saved your family, so you oughta help him out or you’re an asshole.

John McTiernan made DIE HARD more humorous and less grim than the book it was based on, Nothing Lasts Forever, because he said he wanted it to be a movie with “joy” in it. This is not a movie with joy in it. This is a movie that does not like joy at all. Bruce doesn’t do alot of wisecracking or running around getting upset saying “JESUS CHRIST! FUCK ME MAN, FUCK ME!” He’s more of a quiet, grimacing type. But it’s a good joyless movie. This is not one of those lemons Bruce does alot of the time. This is a good circa 2005 sicko Bruce movie.

Ben Foster Bruce Bruce Willis Florent Emilio Siri Kevin Pollak Rumer Willis
This entry was posted on Monday, March 14th, 2005 at 4:09 pm and is filed under Action, Bruce, Crime, Drama, Reviews, Thriller. You can follow any responses to this entry through the RSS 2.0 feed. You can skip to the end and leave a response. Pinging is currently not allowed.