Let me point out a few connections: The score is by Lalo Schifrin, but the opening credits are still DEATH WISH sequel style cheeseball drum machine and keyboard rockafire explosion over establishing shot of the city (Lalo’s revenge for not getting to score part 3, I bet). Kevyn Major Howard, the gang rapist Stomper in DEATH WISH II, plays a criminal who gets off due to improper police work by Callahan. And like most DEATH WISH movies the lead villains are maniacally overacting gang rapists. In DEATH WISH and DEATH WISH II Bronson is getting revenge after (among other things) his daughter was gang-raped into a state of catatonia. In this one Sondra Locke is getting revenge because she and her sister were gang raped and her sister is in a state of catatonia. Speaking of which, Bronson’s wife Jill Ireland was in DEATH WISH II, and here we have Clint’s live-in lady friend at the time starring in this one. It ends a little more like the first DEATH WISH with the police (in this case Harry) knowing about the vigilante actions and letting it go because they sympathize. 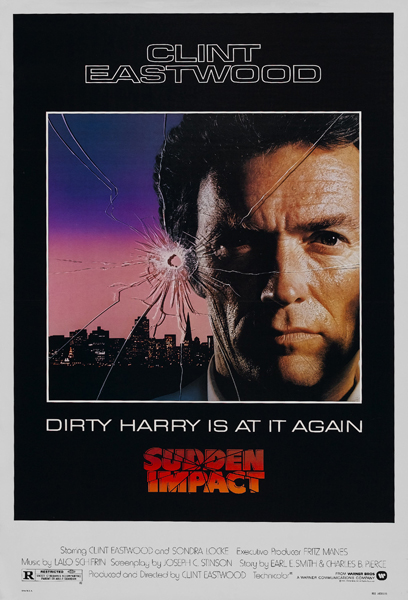 This is the only DIRTY HARRY directed by Clint, and although it’s not the best one it’s got some of his thoughtfulness in it. In the DEATH WISH series there was always a little sense of some kind of patriarchal shit where it’s always the women in his life getting hurt and he’s getting revenge, it’s like they keyed his car or something. Here it’s the actual victim of the crime getting the revenge, and evening the score by shooting off their balls. (I wonder if this is the first review where I tried to describe a movie as thoughtful because of guys getting their balls shot off? Probaly not.) Anyway, THE ENFORCER explored gender equality and this one still seems down with this idea (although still not enlightened about the gays – check out the small town cop casually referring to one of the villains as “the dyke”).

It further explores the “where do you draw the line?” question of MAGNUM FORCE but this time comes out on the side of vigilantism, at least in this case when it’s not done by a cop. Harry seems a little less sure about what’s right and what’s wrong. This lady is saying shit that he could’ve said. “What about my rights?”

Even the climax of the movie is reminiscent of a DEATH WISH because it takes place in an amusement park (Santa Cruz boardwalk I think) and uses some western showdown meets horror movie type imagery when Harry appears down the boardwalk completely covered in shadow and holding his gun. It’s weird having Harry so out of his element – even out of San Francisco – so it seems like the least Dirty Harry DIRTY HARRY movie. And yet it’s the one that used the line always associated with the character: “Go ahead, make my day.” They probaly couldn’t have known how much that line would catch on, but they knew it was a good one because they use it twice. They do not have a scene where he foils a crime while eating, but they do have a scene where he criticizes a colleague for putting ketchup on his hot dog, which is a good point. Also Albert Popwell returns, this time promoted to partner. Kind of a mixed blessing – he’s graduated from punk to partner, but of course both categories of characters are doomed in a DIRTY HARRY movie. So what’s the point? Also he gives Harry a dog named Meathead.

Sondra’s character is an artist – she funnels her troubled psyche into spooky paintings, but clearly she doesn’t do enough of them to get it all out. She mentions that she’s in town to restore the horses on a carousel, but somehow I didn’t see the PERFECT VILLAIN DEATH coming. The lead rapist falls off the top of a rollercoaster, breaks through the top of the carousel and is impaled on a unicorn horn. I mean that would be a cool death no matter what but in this case you can read it as his victim raping him with her art – pretty fuckin amazing. I mean I enjoy a good impalement regardless and I’m not a big fan of looking for phallic imagery in everything, but in this case it works. That’s right, a unicorn horn is actually a big dick. Keep them out of your daughter’s room.

Clint Eastwood vigilantes
This entry was posted on Friday, August 8th, 2008 at 10:33 pm and is filed under Reviews, Thriller. You can follow any responses to this entry through the RSS 2.0 feed. You can skip to the end and leave a response. Pinging is currently not allowed.