Since I was one of the elite few to sort of recommend HALLOWEEN REMAKE II I thought it was my duty to inform you that I less-sort-of-recommend the new unrated director’s cut than I do the theatrical one. The new cut is quite a bit different, but mostly what’s added is unpleasantness to make you not like the characters or enjoy the experience of watching the movie. There are several scenes and extensions added so that Laurie – who had a sweet friendship with fellow survivor Annie in the theatrical cut – is angry at Annie and they’re always fighting. Most of the new material involves Laurie screaming, crying and swearing, getting in arguments with Annie, then screaming FUUUUCKKKK! She also has a screaming fit at her therapist (Margot Kidder) and calls some beer she’s drinking in her bedroom “my new best friend.” 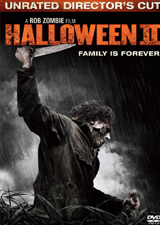 I guess Zombie is trying to show the mental effect the murders had on these characters, and to make it less of a transition when SPOILER Laurie seems to be crazy later on. But all it does is emphasize Zombie’s biggest weakness as a writer: he seems to think that having sympathetic characters is some kind of sell out move and that it’s somehow subversive to bum you out by forcing you to watch obnoxious, hateful people swear at each other.

To be fair he does make it more realistic here than in the first one. The performances by Scout-Taylor Compton (Laurie), Danielle Harris (Annie) and Kidder are good, and it’s not the self conscious shock value dialogue like William Forsythe talking about skull fucking. But to me it didn’t add anything good to the movie, just gives you more you have to forgive to get to the good stuff.

And I mean, I don’t mind how everything is changed from the original John Carpenter characters, but just like with Loomis being turned into an asshole celebrity instead of a Van Helsing type you get into trouble if you stop to wonder how this version of Laurie is an improvement or worthwhile alternative. Jamie Lee Curtis as Laurie was this really nice girl that you felt for. She did spend some time crying and screaming I guess, but only when she was being chased. Do you feel that she would be more interesting to watch if she was always crying and swearing at everyone and drinking and taking pills and complaining that her life sucks? Personally I gotta say no, that does not make her more interesting. And in fact in H20 we got to see a traumatized, alcoholic Laurie who was still likable.

There’s also an alternate ending that I don’t like as much. Not a completely different ending, but a different, not as good version of the same basic events. In this version the mask is completely abandoned instead of having the great image of Laurie stumbling out wearing it.

This DVD also made me realize that some of what I liked about the movie was not what Zombie intended. I really liked the ambiguousness of it. There are all these hallucinatory scenes of Michael’s mother and younger self following him around, and with what happens to Laurie at the end it’s up to interpretation what exactly is happening and what Michael’s goals are. But in the director’s cut there are some extra scenes more blatantly explaining what’s supposed to be going on – for example Loomis has a big speech about how Michael has to kill him because he’s a surrogate father figure, and Deborah Myers has a scene standing in front of a billboard of Loomis’s book telling Michael he has to go after him.

The first chunk of the movie is the best, and here the director commentary made me realize that again, the ambiguousness is not what Zombie intends. Both cuts open with a nice scene of young Michael and his mother talking in the asylum, then it says “15 years later” and there’s a great scene of Laurie walking zombie-like through the streets of Haddonfield after having killed Michael at the end of Remake Part 1. She ends up in the hospital where Michael, somehow having risen from the morgue truck and escaped, comes and massacres everyone. At the end of the long, horrific sequence, Messed Up Halloween Remake II era Laurie wakes up from a dream, screaming. But it says “2 years later.”

See, how do you interpret that? We know that it was a dream, Michael obviously didn’t kill her. But also we know that Michael did somehow survive, his body did disappear. We know that Laurie must’ve been taken to the hospital. And if it’s all imagined then how is it 2 years later? 2 years after non-existent events? I read it as saying that some version of these events did happen, but some or all of what we’re seeing is Laurie’s traumatic dream memories of it.

Nope. Zombie tells you where the dream begins and ends. It’s all a dream, he says. I liked it better when it was cool.

On the positive side, the director’s cut does add a pretty effective extension to Sheriff Brackett’s discovery of his daughter’s body. Brad Dourif’s grief here is much more human and upsetting than you usually see in a horror movie. Also they incorporate some home video footage of Harris to remind you she was the little girl from HALLOWEEN 4 and MARKED FOR DEATH.

Also, Zombie did add some new ambiguity to the movie because I sure as hell didn’t get that Laurie was actually dead and not in a sanitarium until I listened to him explaining it on the commentary track.

In either incarnation HALLOWEEN REMAKE II is a flawed movie, but as long as I try to ignore what Zombie says about it I still think it’s pretty admirable. It’s an unexpected take on Michael Myers that works better than most of the real Halloween sequels, and when it’s working it really drags you in with its naturally lit photography of all these dark, rainy streets, fields, hallways and parking lots. And I never expected a sequel to an unwanted remake to contain any images as strange and beautiful as the procession of Deborah Myers, young Michael and adult Michael carrying the unconscious Laurie away from a burning and then exploding car.

The first remake I thought was sort of an interesting failure, a bad movie that tried a few things I wish would’ve worked better. This one leans way more heavily on the interesting and less on the failure. I actually think it’s kind of good. But if you want my advice I say go with the theatrical cut on this one.

hospital horror Robert Zombie Tyler Mane
This entry was posted on Wednesday, January 13th, 2010 at 2:59 am and is filed under Horror, Reviews. You can follow any responses to this entry through the RSS 2.0 feed. You can skip to the end and leave a response. Pinging is currently not allowed.