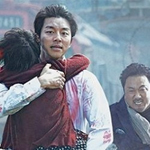 Anyway he’s got a bunch of shit going on at work but he reluctantly agrees to bring his young daughter Su-an (Kim Su-an) on the train to Busan to see her mother, because it’s her birthday and she kept threatening to go by herself and then he really blew it when trying to buy her a good present.

It takes its time establishing the family troubles here and getting them on this trip. Or at least longer than UNDER SIEGE 2: DARK TERRITORY does with Uncle Casey bringing a teddy bear and realizing his niece is way too old for it. It’s as the train is just about to close the doors that a messed up infected individual darts on so fast the ticket taker happens to be looking the other way and doesn’t notice. There are so many what ifs here: what if the door closed half a minute earlier? What if he refused to let his daughter go to Busan? Or what if she had gone by herself like she originally planned? 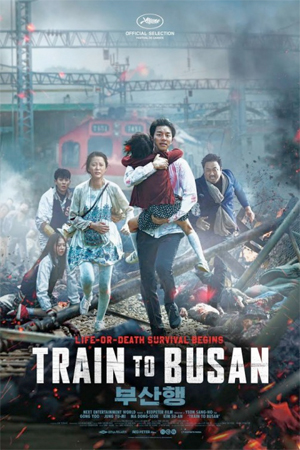 We see a few of the staff and other passengers – including young Yong-guk (Choi Woo-shik) and his baseball team and Jin-hee (Ahn So-hee) the unofficial cheerleader who goes along because she’s courting him – before “violence breaks out” on the back of the train and starts moving its way up. Writer/director Yeon Sang-ho (whose other three features are animated, strangely) does a great job of showing the people not immediately recognizing what’s going on. Seok-Woo, for example, sees someone run by in a panic but he seems to kinda figure “huh, wonder what’s that about?” and doesn’t react too much. Like, sometimes somebody lunges at you or does something crazy on the sidewalk, the natural thing is to not encourage them by reacting.

But if you have a member of the train crew running down the aisle screaming while somebody else is on her back contorting their body in strange ways and gurgling and hissing while chewing at her neck, then you should react.

Zombie details: fast, jerky, caused by some sort of chemical leak, transmitted by bite or death. They have visible veins and whitened eyes that turn out to be helpful to the living because it means they can’t see well in low light situations. Therefore much of the action of the movie involves sneaking past them during the windows of opportunity when the train goes through a tunnel.

Sang-ho continually comes up with new tricks like that and things for them to have to do to survive – calm the zombies by staying out of their view, battle their way through them to get to the car they think is safe, find another train when the tracks are blocked. The mastermind of many of these plans is Sang-hwa (Ma Dong-seok, THE GOOD, THE BAD, THE WEIRD), the tough husband of pregnant Seong-kyeong (Jung Yu-mi, A BITTERSWEET LIFE), who acts like a cool uncle to Soo-an but instantly dislikes her dad and gives him lots of shit. He’s being macho but he has good reason for it (Seok-woo shut a door in front of them when they were fleeing and hesitated before letting them in) so it’s very satisfying when Sang-hwa warms up enough to at least start calling him “buddy” and trusting him to help with his ideas.

One unusual change from the Romero standard: they don’t have guns or knives, so there’s no discussion of how to kill zombies, and I’m not sure if they do kill any. Instead it’s all about punching and throwing them to get past them and get through doors. They do use baseball bats but it’s to knock them out of the way, not necessarily to pop their skulls open. They use shields and cover their wrists in thick layers of tape like gauntlets.

The more apocalyptic zombie stories tend to at least flirt with a survivalist attitude, they tempt you to believe that shit is so bad you’d be stupid not to adopt an every-man-for-himself, kill-or-be-killed philosophy. In this one, Seok-woo starts out with it and tries to teach his daughter to only look out for herself during this emergency, not risk herself to help others. But she shames him, telling him that his selfishness is what caused his divorce and basically parenting him over the course of the movie, teaching him to help others.

The true villains of TRAIN TO BUSAN are (SPOILER) the C.O.O. Yon-suk (Kim Eui-sung, ASSASSINATION) and the others who ended up in the front car and listen to him when he argues that they can’t let anybody on because they could be infected. Our people fight car after car of zombies to get here and now they have to fight the living just as viciously. There’s a potent and completely believable feeling of betrayal at this disgusting act. Some get riled up and yell and swear at the newly arrived to leave the car. Others hang their heads in shame but still choose desperate-heartless-self-preservation over moral courage. Watching it right now the obvious analogy to make is our country cruelly slamming the door in the face of refugees fleeing from war zones on the theory that they could be terrorists. Honestly, the immoral decision in the movie is more understandable than ours is.

But man, that fucking COO continues to Billy-Zane-in-TITANIC up the place, literally pushing people into zombies so he can make a run for it. I forget what his company is but I am NEVER using their product or service again in my opinion. The other characters, though, I really grew attached to, they feel strong enough that you expect most of them to make it through, and (SPOILER) most of them don’t. There’s more than one touching scene of self sacrifice as one character we like holds the horde back so the other characters we like can get away. I found it sad but I gotta tell you, I was taken completely off guard when I started spouting honest-to-goodness tears all the sudden near the end. It came almost out of the blue like when I lost it during THE TREE OF LIFE. I will tell you which part in the last paragraph for those of you who have seen the movie already. The rest of you, I think you should choo-choo-choose to watch TRAIN TO BUSAN.

BIG SPOILERS THIS PARAGRAPH. It was after the scene when Seok-Woo has been bitten protecting Su-an and Seong-Kyeong and realizes he has to say goodbye and then get away from them before he ghouls out. The solemnly-facing-the-reality-that-they’re-turning is a standard zombie movie event, but this one has really made us invest in this guy improving his relationship with his daughter, so it’s not as much losing him that’s sad as knowing that his daughter is being left alone. And he steps out to the back of the train and I thought about my dad’s dementia and the horrible daydreams I have about what I would do if I realized it was happening to me. And that’s personal shit that I brought to the movie of course but I’ve seen a million zombie movies and this is the first one that was human enough to give me those types of associations. And come to think of it they pointed me in that direction with the earlier scene of the infected conductor who seems to be having a childhood flashback just before he turns and starts asking for his mom. The most heartwrenching zombie turn I’ve ever seen! At least Seok-Woo’s transition is beautiful. He remembers his daughter’s birth and he smiles.

Gong Yoo Jung Yu-mi Kim Eui-sung Korean cinema Ma Dong-seok trains Yeon Sang-ho zombies
This entry was posted on Tuesday, March 21st, 2017 at 11:45 am and is filed under Horror, Reviews. You can follow any responses to this entry through the RSS 2.0 feed. You can skip to the end and leave a response. Pinging is currently not allowed.

10 Responses to “Train to Busan”