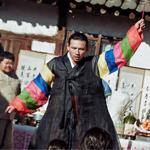 This is our hero. Not some badass. Just a guy. And it endears us to him so that we’ll relate all through the movie.

Jong-goo seems like he would be in a comedy before a horror movie. There’s some dry humor between him and his buffoonish friend and weird happenings in the town. For example a scene where they try to do their job of sitting in lawn chairs guarding a crime scene while some crazy woman down the street is crawling around on the ground throwing rocks at them. It cuts away and comes back and there are rocks all over the ground around them like she’s been throwing for an hour and they’ve never figured out how to make her stop. They just sit there and take it. 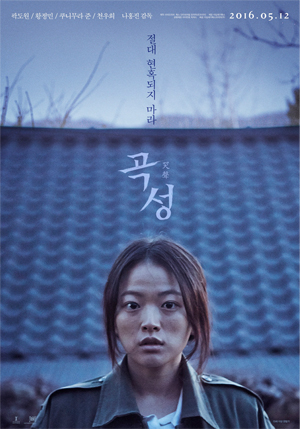 There’s a theme of storytelling: people telling scary tales, spooking each other, some repeating other people’s stories, rumors spreading around, mostly about this Japanese man who lives in the mountains who people claim to have seen running around buck naked with glowing demonic eyes and eating a deer’s throat out, stories like that. You know, gossip. We’ve all been victim to it.

So, something is happening in this town. A few residents have flipped out, savagely murdered somebody, then sat there dazed and covered in blood with no explanation of why they did it. Or they’ve just gotten really sick and might die. It’s spreading around the city. There are many theories. The main one being: there’s that Japanese guy. It’s his fault.

Jong-goo tries to be the reasonable one. He comes up with a more plausible explanation than foreign witchcraft, and is sad that he’s not taken seriously. He gets a Japanese-speaking priest to come with him to talk to the Japanese man, and actually finds some strange shit in his house – pictures of all the infected people, and some of their belongings. Including a shoe belong to Jong-goo’s daughter, Hyo-jin.

That’s when it gets intense, when Hyo-jin has the sickness. It’s brutal. Screaming and cursing, she totally Linda Blairs out on him. The mouth on that little girl. Embarrassing. And it’s not like her. And also she gets covered in boils. So it’s not just, like, she’s having a hard time in school. It’s clearly a real disease and/or magical curse of evil.

Jong-goo changes as the mystery becomes personal – more willing to believe crazy shit, more willing to do crazy shit, more determined, more serious, less moral. He will turn into Liam Neeson if necessary to save his daughter. I forget if Liam Neeson ever kills a dog when trying to save his daughter. Jong-goo does. But just killing dogs isn’t gonna get it done, so he decides to listen to what everybody was saying before and hire a shaman.

The shaman Il-gwang kinda acts like a rock star, and kinda is one. He performs an exorcism ritual that, frankly, is way more fun than what those Catholics do in THE EXORCIST and the ten thousand boring exorcism movies that have been made since then. This guy’s routine is to other movie exorcisms as James Brown’s church in THE BLUES BROTHERS is to white people church. He’s got all these guys drumming and playing weird instruments and there’s a bunch of goat heads and chickens around, a bunch of shit on fire, he’s dancing around, stabbing knives into hanging sides of beef, spitting blood onto swords, chopping wood with the swords… It’s like a free-jazz concert that got way out of control. I can see why people would be into this. We could go out to a club and that could be a good time but hey, should we see if anybody’s doing an exorcism tonight?

To be frankly honest I’m not sure what this one is all about. At first it seems to be warning about the dangers of gossip and xenophobia. But then it seems to confirm that the gossips and xenophobes knew what the fuck they were talking about. I definitely think there is a certain cultural understanding that I’m missing here. But I also think that’s part of the movie’s weird appeal – I don’t really have a context for it so it feels more out of control, less predictable. I can’t tame its scares by comprehending them.

I also don’t know why it’s called THE WAILING. I thought there would be some bloodcurdling cry to identify the possessed or something. I don’t know. It still works as a title though in my opinion. It’s creepy, whatever it is.

demonic possession Korean cinema
This entry was posted on Thursday, March 23rd, 2017 at 11:46 am and is filed under Horror, Reviews. You can follow any responses to this entry through the RSS 2.0 feed. You can skip to the end and leave a response. Pinging is currently not allowed.

16 Responses to “The Wailing”