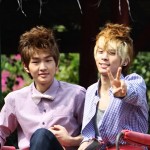 Of course the title refers to the main subject of the movie, the controversy that came in 2003 after Dixie Chicks singer Natalie Maines ad-libbed the dangerous sentence, “We’re ashamed that the President of the United States comes from Texas,” during a concert in London. Because of that one sentence (and some mild anti-war, pro-human life comments on the eve of the invasion) right wing web sights organized call-in campaigns to country music stations across the country, causing the corporation that runs the computer that programs every radio station to not play Dixie Chicks songs anymore. Meanwhile, idiots with bad handwriting made signs and stood outside of Dixie Chicks concerts reinforcing all the worst stereotypes about lower class white southerners. 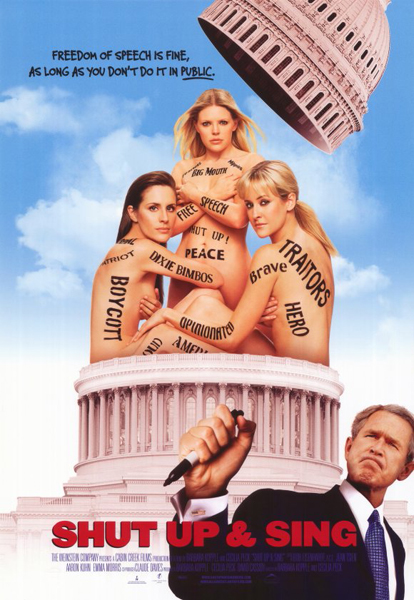 This political context is the hook that makes the movie interesting, it’s obviously what got me in the theater, but thankfully it’s not the whole show. What really makes the movie work is the charisma and humanity of these three woman in the band. We see them doing alot of things: answering criticism in interviews, performing, writing new songs, giving birth, discussing security after death threats, calling Bush a “dumbfuck.” What we don’t see them doing is fighting. Maybe it’s selective editing, I don’t know, but it was refreshing to see a music documentary where the whole band supports each other for the entire running time. They don’t always agree, but they never seem to get mad at each other. Diane Sawyer tries to bait the two backup Chicks to turn on Natalie for having the nerve to say one honest sentence while performing. But they don’t do it. More than anything this is a story about them standing united and not backing down. In the end they have switched out some of their old fans for new ones, they aren’t being played on the same radio stations, and they have had to scale down their tour a little bit. But they have kept their integrity and their dignity. And it doesn’t hurt that they were obviously right about the war, as hinted by occasional appearances by the notorious “Mission Accomplished” banner, vintage statements about weapons of mass destruction, etc. Although I’m sure they’d rather have been wrong about that.

Another thing the movie wisely avoids is preaching. The discussion of the war is kept brief and simple. Same goes for the discussion of free speech and expression. The situations speak for themselves. The whole thing is very smartly put together by Barbara Kopple and rookie co-director Cecilia Peck. It’s not 100% pure Maysles style direct cinema, because I think they or at least the idiot protesters speak directly to the cameras now and then, but this is the type of documentary I like. Less explaining, more showing, more cinematic. Not like these Robert Greenwald documentaries and what not, it works as just a movie, not just as a message.

Because you get to see alot of interesting and unusual things. There’s a funny scene where they discuss their predicament with a publicist or image consultant type dude who warns them they need to consider how they will look in a week when the war has been won and the soldiers are coming home with all their limbs, flowers in their hair, still bouncing off the walls from all that candy. (Okay he doesn’t say it in those words, but he does say “this war could not be going any better.”) You also gotta enjoy the meeting with their tour sponsor, Lipton Tea, right after the controversy broke. The Lipton guy seems pretty supportive. The Chicks give him an opportunity to back out. Natalie says “We don’t want it to effect tea.”

There’s a funny little part about the Dixie Chicks having a feud with the popular asshole country singer Toby Keith. I think he started it by showing a photoshopped picture of Natalie Maines with Saddam Hussein in a slideshow during his concerts. She didn’t diss him on a mixtape like a rapper would do, but she did go on some awards show or something with a shirt that said “FUTK.” I remember reading that at the time but in this movie you see the genesis of it when their manager jokingly dares her to do it and she decides to accept that dare.

Now, I wasn’t sure about this but it turns out that yes, Toby Keith is the guy who wrote that moronic “Boot In Your Ass” song. I have mentioned this stupid song in some of my columns and what not, but many of my readers are not Americans and hopefully don’t know what I’m talking about. The song starts out talking up the brave soldiers that fight for freedom and what not and how his dad lost an eye in the war. Then he starts talking about 9-11 and how “Soon as we could see clearly through our big black eye, man we lit up your world like the 4th of July.” He was talking about that first war where we sent the Taliban running, set up the pipeline and the opium fields, then took off for Iraq, never caught bin Laden and after a while pretended like we never were trying to find him anyway. I read up on it, and Mr. Keith actually says he’s not pro-war and was against the Iraq war and wrote the song while he was angry. But that didn’t stop him from releasing it as a single and promoting it into an anthem for the start of the Iraq War. A handy rhyming version of the “Iraq is connected to 9-11” lie. And if he’s against the war too then shouldn’t he be in that picture with Saddam and Natalie?

Here’s the worst part: “Justice will be served and the battle will rage, this big dog will fight when you rattle his cage, and you’ll be sorry that you messed with the U.S. of A.,`Cause we`ll put a boot in your ass, it`s the American way.” (audience cheers and starts jerking off onto a flag).

In SHUT UP AND SING we hear a clip of Toby Keith defending himself from Natalie Maines’s (unheard) criticisms of the song. He incorrectly says that she’s not a songwriter, then says, “She says anybody could write ‘boot in your ass,’ but then, you know… she didn’t.” That got one of the biggest laughs in the movie.

But to be fair to Mr. Keith, we can now recognize him as ahead of his time. Back then I would’ve agreed with Maines that the song is ignorant and makes country singers look like a bunch of bloodthirsty redneck idiots. He talks about American symbols like the Statue of Liberty, the flag, the eagle and somebody named “Mother Freedom” but instead of them actually standing for freedom or democracy he uses them as things that are gonna kick somebody’s ass. I mean what kind of a dumbass considers sticking a boot up somebody’s ass (literally or figuratively) to be what America is all about? Well, I’m still against it but now it’s true. With the passing of the Military Commissions Act into law, sticking a boot (or electrode) up somebody’s ass really is the American Way. Hey man, that’s the system, you gotta accept it.

There’s also so much irony all over the place that if it was fiction I would think it was too corny. After the show in London their manager says, “Mission accomplished!” (before the notorious Bush banner). In their first conversation about the backlash, the manager talks (maybe half joking) about how great it would be if people started smashing and burning their CDs.

There is some obvious sexism going on through the whole thing. I got no doubt that they would’ve gotten similar treatment if they were men, but maybe not as intense. Protesters call them “Dixie Sluts” and “Dixie Bitches,” Pat Buchanan calls them “bimbos” on TV, the famed obscene phone caller Bill O’Reilly says they “should be slapped around.” Nobody quite gets to the point of saying they should shut up and have babies, but I wish they did because a good portion of the movie is about them having babies.

There seems to be kind of an escalating “culture war” battle going on. Natalie Maines briefly mentions that she’s against the war, so right wing web sights organize a letter writing campaign to radio stations, so country fans get mad at the group, so country stations systematically stop playing them, so they have no choice but to look for other avenues for their music, so THEN the same stations that made a gimmick out of not playing them feel betrayed that the Chicks don’t come back begging to be played. PLEASE play our music that you don’t want to play. PLEASE. We pledge allegiance to whatever you want. Oh please daddy we didn’t mean it! Just one more chance baby, please, we love you! TAKE US BACK! YOU CAN’T JUST LEAVE US OUT HERE!

But at the same time the movie shows how the Dixie Chicks are not some kind of “Hollywood liberals” or whatever the stereotype is. Well, Natalie Maines is married to the actor Adrian Pasdar from NEAR DARK. But one of the other gals (sorry, I don’t know their names. If they had descriptive names like the Spice Girls I could remember, but they don’t) is married to a rancher who talks about how he hates even being in L.A. to visit her while she’s recording. Then his son sprays him with a hose.

In fact the whole middle section of the movie is about them as people and as musicians more than as Bush-critics. They get cast out so they go to the foreign land of L.A. to record their first post-country-radio album. They have a friendly “how do you guys split your publishing” conversation with the drummer for the Red Hot Chili Peppers. There’s a really funny scene with producer Rick Rubin, the freaky genius with the giant beard who has done everything from founding Def Jam Records in his college dorm room to producing Johnny Cash’s last five albums. He sits cross-legged on his couch, wearing pajama pants, listening to their songs and announcing which parts he likes: “I like the melody. Good change up. I like the words,” etc. And the Dixie Chicks smile.

Forget the politics, forget the music. I liked the movie because I like good documentaries. I’m not sure it tops DAVE CHAPPELLE’S BLOCK PARTY, but this is definitely one of the best documentaries I’ve seen in 2006 and one of the more enjoyable movies period.

music documentaries
This entry was posted on Monday, November 27th, 2006 at 2:08 pm and is filed under Documentary, Music, Reviews. You can follow any responses to this entry through the RSS 2.0 feed. You can skip to the end and leave a response. Pinging is currently not allowed.