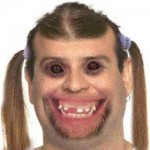 I happened to see this movie MAN-THING and I figured it was my duty to notify you boys. The cover says it’s Marvel Comics and “from the producer of SPIDER-MAN, DAREDEVIL, X-MEN and BLADE.” Funny, no mention of ELEKTRA or DAREDEVIL. You remember that one, where Ben Affleck was the blind sadomasochistic biker version of Spiderman, and Colin Farrell kept trying to kill him by flicking peanuts and paperclips and shit at him? I was thinking maybe I dreamed that movie but my sources assure me that it was an actual, theatrically released movie starring popular Hollywood actors.

This one though MAN-THING is not a theatrical release and does not star actors I ever heard of, anyway. I guess it was made to play in theaters but somebody along the way must’ve watched it and decided to be true to the film they made by releasing it straight to video where it would never be seen by anybody unless they like to get high and watch the Sci-Fi Channel. To be fair, it is actually kind of a half theatrical, half straight to video abomination of nature. The photography is pretty decent, nice colors and lighting. The effects are better than a BOA or a PYTHON or a BOA VS. PYTHON. The score is decent too, sounds like a real orchestra, none of that Full Moon Video keyboard shit. The production values are definitely on par with a lower budget theatrical movie. It’s only minor details like the story and characters that scream SASQUATCH HUNTERS.

Remember that old Wes Craven movie SWAMP THING which I believe was also based on a comic strip? Not that good of a movie but the premise was, there’s a swamp monster living out in the swamp, only instead of just being a monster and scaring everybody he’s actually the romantic hero who stops the bad guy and gets the girl. For MAN-THING they took that premise and twisted it around. What if instead of the good guy, the swamp monster was a monster, out in the swamp, attacking people? What if there were people going around in the swamp, and then all the sudden they start screaming at the sight of some thing off screen and then blood squirts and the music gets all loud?

Yes, this is the story of a tree monster in a swamp that eats a bunch of characters you don’t give a rat’s ass about. The kind of characters who, even if you were the writer and you based the characters on your own mother, you wouldn’t feel anything seeing their rotted half eaten bodies dissected on film.

So if you are someone who likes imagination, originality, something that is not boring, etc. in a movie, you are in the wrong god damn swamp, boy. While the Swamp Thing was a man who grows into swamp, the Man Thing is a swamp who grows into swamp. As the Wise Native American Elder Who Explains Everything explains, Man-Thing is a spirit guardian protecting the ancient swamplands from the encroachment of macho oil drillers. “It protects what our ancestors called, ‘The Nexus of All Reality’.” Unfortunately this is the only funny line in the movie.

The bad guys are bullying father and son oil magnates the Schists, who I’m sure had their name made fun of when they were kids so they turned evil. The son’s haircut and company logo patch make him look like a nazi, a rare nice touch in a not very nice movie. The good guy is called Sherriff Kyle Williams, one of those handsome young WB looking sheriffs. They figure if they keep mentioning he’s young for a sherriff they can get away with casting a guy who doesn’t look like a cop. The actor, Matthew Le Nevez, is actually okay I guess. He seems like some guy in a TV pilot you figure you might grow to like if you watch more episodes. But let’s face it, you got better things to do with your life than watch more episodes of this.

The Man-Thing by the way is off screen for most of the movie, you only see him clearly 3 or 4 times near the end. He is a big plant guy with vines coming off him. He makes plants grow out of people and at least once whacks a dude right in the crotch, which I assume is where he gets his great nickname. Not sure if that’s from the comic or not. The only trouble with Man-Thing is, he is not a character. He does not have a personality or really do anything cool, or even look all that cool. It’s got all the elements of a good monster movie except for the good parts. So it’s got, like, a monster. That’s about it.

They act like you’re supposed to care about the sherriff as he solves a mystery: who is killing all these people in the swamp? But we already knew before there even was a sherriff that it’s the fucking swamp monster. So I’m not sure what the idea is here.

I think this picture was shot on Harry’s favorite continent, Australia, judging from the shifting accents. The FRIDAY THE 13TH-style girl-shows-boobs-then-dies opening had me feeling pretty dislocated because the accents seem to span from generic American to Aussie to phoney cajun.

Funny thing about that opening scene: a couple goes out to screw where the sun literally don’t shine, the “dark water” of the swamp. Man-Thing pulls a J. Voorhees, impaling the guy while the woman screams over his shoulder. You don’t see what happens to the gal, but in the next scene the police talk about how a local boy is missing. No mention of a girl missing or saying she saw a monster. I guess she must’ve gotten away but figured it wasn’t worth reporting that her boyfriend was torn apart by an angry Native American plant monster.

(Or more likely they added this scene at the last minute to get some tits in there, and didn’t care that it didn’t connect with the rest of the movie.)

The directionist is Brett Leonard who did LAWNMOWER MAN and VIRTUOSITY. Don’t get me wrong, I’m as proud as the next guy, I’m sure it was real hard to put the damn virtual reality goggles down and get on with his life. But I’m not gonna handicap him. This is not a good movie. I have not seen his last movie SIEGFRIED & ROY: THE MAGIC BOX so I don’t know how it compares to that. If it’s anything like this one though I ain’t trackin it down. And it’s probably about a bunch of people wandering in a casino and getting eaten off screen by a magic tiger.

Anyway, not gonna waste anymore of your time on this one. I cannot recommend it either on an ironic or actual level. MAN-THING is gonna play on Sci-Fi Channel, where it belongs, on April 30th, and it’ll be on DVD June 14th. Mark those dates on your calendar and then make sure you’re busy on those days, I guess.

As always, Vern, I bow to your superior kung-fu.

Brett Leonard Marvel Comics
This entry was posted on Friday, September 22nd, 2006 at 4:44 pm and is filed under Action, AICN, Comic strips/Super heroes, Horror, Monster, Reviews, Science Fiction and Space Shit. You can follow any responses to this entry through the RSS 2.0 feed. You can skip to the end and leave a response. Pinging is currently not allowed.

One Response to “Wanna See Vern’s MAN-THING? Er, His Review, I Mean…”