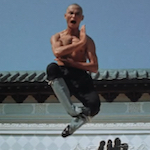 Jun-kit (Liu) and Fung-wu (Adam Cheng, ZU: WARRIORS FROM THE MAGIC MOUNTAIN, SEVEN WARRIORS) are the respective top students at Shaolin and Wu Tang schools in the same city. Although their masters (Han Chiang and Hoi-San Kwan) have a bit of a rivalry when they run into each other in town, their students laugh it off and hang out at the brothel together. But they make the mistake of sparring there, showing off their abilities in a friendly competition. Word gets to the local Qing Lord (Wang Lung Wei, MASTER OF THE FLYING GUILLOTINE, THE BOXER’S OMEN, THE SEVENTH CURSE), who says “If what you say is true, the Shaolin and the Wu Tang could be dangerous,” as famously sampled by Wu-Tang Clan on “Bring Da Ruckus.” So he decides he must learn both styles to protect himself.

Rather than going and training at the schools, as one of his stooges suggests, the Lord invites Master Law over for a chess game so he can poison him (see also: Matt Schulze in OUT OF REACH) and refuse him the antidote unless he gives them the Wu Tang manual. In an impressively extreme move, Master Law directs Fung-wu to demonstrate some of the moves and purposely steps right into one of them. As he dies he makes his horrified student promise never to give up the secrets.

So they put Fung-wu in prison for the stabbing. Or actually it seems to be a women’s asylum. A cell with just him and a bunch of mentally ill women who mob him at first. 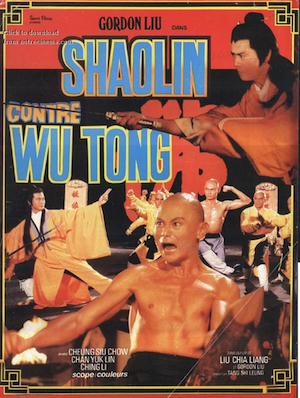 This section has one of those far-fetched and beautiful ideas that makes me fall in love with a kung fu movie. They feed the inmates with a huge bucket of rice, but make sure it gets to Fung-wu last, when it’s empty. They figure the starvation and mental anguish will loosen  his lips.

But as he’s trying to scrape the remaining grains out of the bucket, a woman (Ching Li, KILLER CLANS) who’s always counting to herself comes over to him holding a ball of rice. Reluctantly he eats it out of her hand. Meanwhile, Jun-kit gets a job as one of the guards at the jail, and starts to be the one who feeds them rice every day. As he does it he thrusts his fists between the bars to teach the woman moves that she uses to hit Fung-wu in his pressure points to help heal him. Each time he brings their rice he’s doing movements that she perfectly mimics. I love this convention in kung fu movies that each style has powerful moves and if you just see them you can understand and have them at your command.

So he covertly teachers her Shaolin Chin kang fist! Once they escape, Fung-wu teaches the woman some of the Wu Tang sword style to fend off attacks from those dudes you see in these movies with the uniforms that look like the Fantastic Four. So now she has a mixture of both styles. Sadly she turns out to be a spy, teaching what she learns from them to that god damn Lord!

In the last third it turns into a training film, with the two friends split up and going to their respective styles’ temples – Fung-wu to be put on trial for killing his master, Jun-kit to train to avenge the death of his sister (Idy Chan, CASINO RAIDERS). They may be the best at their gyms, but they’re far from the level of monks, so they get new names and train from the ground up, with cool methods like having to pole fight while balancing on a three-dimensional yin-yang and hitting a large metal dummy painted with pressure points.

I think my favorite is when Jun-kit hits a jumble of hanging sandbags on top of an oiled floor, staying balanced even though his feet slide around and force him into the splits. He also has to pass the test of defeating a reverend played by Elvis Tsui (BUTTERFLY AND SWORD, WONDER SEVEN, THE GRANDMASTER). I love the choreography as he fights barehanded against the reverend’s staff, finding different ways to catch it between his legs or otherwise lock it into place. It’s that classic style where each move is a counter for the other, more of a strategic puzzle than a battering, and the exaggerated wood block sound effects create a pleasingly percussive rhythm.

The Lord arranges a competition supposedly to find out which fighting style is best, and for different personal reasons Jun-kit and Fung-wu each fight to become the representative of their temple, unaware they will be fighting each other until they get there.

Again we get the theme of the young people not taking the rivalry seriously: the Lord announces they have to fight to the death, and they tell him that’s absurd. Of course this is leading up to the two friends uniting the styles to defeat the tyrannical Lord. A little extra meaning goes a long way to make it exciting to beat a guy up at the end.

Another highlight is at the very beginning: a credit sequence abstractly illustrating the history of the titular rivalry through a fight between one Wu Tang swordsman and an army of yellow-clad Shaolin fighters on a set that’s mostly a black void. That part is standard, but the incredible part is the synchronized swimming style choreography with the Shaolin lined up and framed to look like some multi-armed beast (or a kaleidoscope).

I saw this in a special streaming event put on by 36 Films, a new venture from RZA, whose idea to name his group Wu-Tang Clan came specifically from this movie. He and Dan Halsted of The Hollywood Theater in Portland, Oregon did a live commentary over a nice new transfer AGFA created from Halsted’s own 35 mm print. He’s the guy who back in 2009 figured out that the Shaw Brothers still owned a theater in Vancouver, BC that had been closed since 1985, got permission to go inside and discovered hundreds of reels of pristine prints under the stage. This one he said he got from a vault sale in L.A. not knowing what it was, just that the title was in Chinese.

Their discussion really spoke to my interests because it’s a great movie and they stepped back enough I was able to follow and enjoy it, but they’re also passionate and encyclopedic in their kung fu cinema fandom so they’re explaining some of the things they love about it, but also RZA is telling stories about him and Dirty drinking 40s and watching it in the middle of the night on 42nd Street, trying to rent the VHS to sample it for Enter the Wu-Tang and finding out Ghostface has had it checked out for a year, making a pilgrimage to the actual Shaolin Temple and Wu-Tang Mountain, and working with Gordon Liu on THE MAN WITH THE IRON FISTS. He said the metal dummy inspired Dave Bautista’s character Brass Body. And Halsted told those finding-rare-prints stories. So it was kind of like having the most incredible people over to hang out and watch a Gordon Liu movie together. I hope they do more.

Note: They are replaying the commentary on Saturday afternoon, if you’re interested and have ten bucks.

Adam Cheng Ching Li Gordon Liu Lau Kar-Leung RZA
This entry was posted on Thursday, May 14th, 2020 at 11:09 am and is filed under Action, Martial Arts, Reviews. You can follow any responses to this entry through the RSS 2.0 feed. You can skip to the end and leave a response. Pinging is currently not allowed.

4 Responses to “Shaolin and Wu Tang”