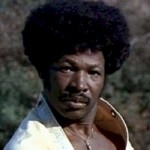 That picture is, of course, Shaolin Dolemite.

This piece is from 1999 but yes it’s the same Dolemite from the ’70s, Rudy Ray Moore the famous toast artist and standup comedian who created the classic films Dolemite and The Human Tornado as well as Petey Wheatstraw the Devil’s Son in Law and Avenging Disco Godfather. If you’re not familiar with Dolemite this is one of the icons of the blaxploitation era. He is more underground than Shaft and Superfly because his pictures were lower budget and sloppier and he directed some of them himself. But he had a strong type of appeal because he drove around in limos with a gang of beautiful women on each arm, but he was kind of this little chubby guy. He would kick everybody’s ass using this real slow, awkward fat guy karate. I mean worse than Steven Seagal.

What Dolemite had going for him was the same thing that the better rapping artists have today, which is sort of a self fulfilling prophecy. If you can do a good job of SAYING that you’re cool, then that means you ARE cool. And Dolemite was cool. He could rhyme up a storm about funny stories or how he’s gonna kick your ass and that was what made him a badass, the verbal techniques as opposed to any traditional badass qualities such as asskicking, etc. Because when he did kick somebody’s ass it looked so funny it would have been (more) laughable if the guy couldn’t rhyme so good.

Well what Dolemite is doing in this picture is a little different, a little more experimental. And it is not modernized. In fact he is going back to before his heyday to borrow from the pop art movement, where these weird motherfuckers like Lichtenstein, Warhol etc. would take something (soup can, comic strip, etc.) and recreate it bigger or a little different or whatever, hang it up in a museum, and make you look at it from a different perspective. So what this Warhol, I mean not that I’m into art or anything but what Warhol is doing is not creating a painting, but creating a perspective. He’s not taking credit for the Campbell’s soup, but hell, let’s give him credit for showing us how to look at it and go, “Yeah, yeah that’s a pretty decent label in my opinion, that’s not a bad label, they did a good job on the Campbell’s soup.”

What Dolemite though is doing is taking a martial arts picture and making you look at it in a different light, where you pretend it is actually a Dolemite picture. What he did was he took some karate movie about the wu tang clan and he splice himself into a couple parts and calls it Shaolin Dolemite. It looks like a pretty old picture to me, like from the ’70s, but from what it says on the DVD it sounds like the footage might have been made in the ’90s though. Like one of the actors is Toby Russell, son of Ken Russell the director of the movie Whore. And another actor who is also the director they claim is the guy who invented wire fighting.

The main plot is that the Wu Tang Clan takes in an outsider from Japan and trains him to help protect them from the ninjas. There is also a black guy named Twopack of the Dolemite Clan who is after them, and a woman in purple named Phantasm, but the credits call her Ninja Ho.

Also Monk Ru Dee of the Dolemite Clan (Dolemite) came to China to make fun of their statues and seek wisdom, and every once in a while (but not nearly enough) it will cut to him watching one of the fights and he’ll say something like “Whooeee, that mothafucka is outta sight!” There are only two scenes where he appears with other characters but they aren’t characters from the rest of the movie. Something fishy is going on here in my opinion but who the fuck cares.

My favorite scene is where an old drunk is stumbling through the woods sucking on a wineskin singing to himself. Dolemite comes along and says, “Sam the Spliff, you mothafucka you out here in these woods beggin? You oughta get yo ass a job! You know it’s ninjas EVERYWHERE?”

Then Dolemite leaves and the ninjas jump out. “What the fuck? God damn, I oughta kick these mothafuckas ass.” And Sam the Spliff does some drunken kung fu and beats these ninjas down. And then we never see the dude again.

Other than that Dolemite isn’t in the picture much, but his touch is sometimes felt in the dialogue. I mean it seems like just your regular period piece martial arts with magic and flying, but then something happens like this wu tang gal throws an exploding bell into the air and breaks a magic trance. Twopack says, “Which mothafucker did that? Huh?” When he finds out who it was, he calls her a “skanky ho.”

“You have brought tragedy to the Wu Tang Family and shame to the Dolemite Clan! It’s time for you to die, do you understand me?”

There’s another good scene that Dolemite isn’t even in at all, where Ninja Ho is taking on the Japanese guy. He starts to defeat her so she opens her shirt, and he just stands there like a jackass staring at her titties. This is the danger of these monks, yeah maybe they are very disciplined but unfortunately they are also sexually repressed, and here you find this guy getting his ass whooped just because he’s never seen a pair of nipples before. She starts fighting him topless which is something I don’t believe I’ve seen before on a woman and I gotta admit, I’m not complainin. I mean not to take anything away from Ninja Ho, she didn’t need to be topless. She’s good as hell at fighting and she might have beat him even if she didn’t knock him down on the ground and start slapping his face with her tits.

Funny thing is this guy is so out of touch as soon as he’s on his feet he starts kicking her in the tits. He must be thinking “These fleshy orbs are the source of her power – must destroy them.” Sorry bud, doesn’t work on Ninja Ho.

Then at the end I’m not sure WHAT the fuck happens but still this is one of the greats. I hate to say it Black Mask but if I had seen Shaolin Dolemite back when I announced the Outlaw Awards, you would have had some competition in the Best Picture – Karate category. But that is the nature of awards and of film critics, they are fallible. Unlike Dolemite.

Robert Tai Rudy Ray Moore
This entry was posted on Tuesday, February 19th, 2002 at 3:37 pm and is filed under Action, Comedy/Laffs, Martial Arts, Reviews. You can follow any responses to this entry through the RSS 2.0 feed. You can leave a response, or trackback from your own site.