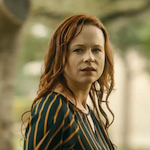 Last time it was one called BLOOD MONEY in 2017. If you heard about that one, and it wasn’t from me, I’d be surprised. It’s a straight to video/streaming thriller about some young people finding a bunch of money in the woods and trying to get away from the gun-toting hedge fund jerk it belongs to, played by John Cusack. Obviously I prefer the thorough originality of THE WOMAN, but I also dig when a good director can follow a pretty standard genre template and craft it with bits of nuance and personality that you don’t expect. In particular I was impressed by some of its gender themes, by the performance of Willa Fitzgerald (Scream: the tv series) and that the only woman in the movie gets to be the Tupac-in-JUICE character who pushes them into danger.

His new one is called KINDRED SPIRITS, so I assumed it would be about ghosts. Instead it’s another low key Lucky-McKee-version-of-a-normal-suspense-genre, but rather than VOD-heist-thing this time he’s doing trashy-Lifetime-domestic-thriller. I wrote this whole review believing it was just Lifetime-esque, because IMDb doesn’t list them as a distributor or anything, but it looks like  it actually did play on that channel. That makes sense, if you saw the trailer, and know the premise: an aunt comes to stay with her sister and teenage niece, then starts trying a little too hard to fit in with the niece and her friends, crossing some serious lines. 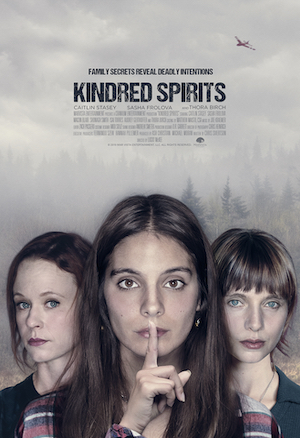 Chloe (Thora Birch, PATRIOT GAMES, CLEAR AND PRESENT DANGER) is a single mom, who had her daughter Nicole (Sasha Frolova, RED SPARROW) very young. When she comes home one day and finds Nicole’s new boyfriend Derek (Isai Torres) shirtless in the kitchen she’s very non-judgmental about it, but commits the unforced error of telling Nicole not to “make the same mistake” she did when they have the “Did you use protection?” talk.

In the middle of this household tension, Chloe’s unpredictable younger sister Sadie (Caitlin Stasey, I, FRANKENSTEIN) shows up. Chloe hasn’t heard from her in a year, and is kind of mad at her, but Nicole sort of idolizes her and is thrilled. Sadie has had some unspecified problems and failures and wants to “start over” by coming back to this house they grew up in. Chloe supports it and Nicole is thrilled about it.

Nicole passes the Good Teen Hero test pretty quick. She goes to school with her Doc Martens and her personal thrift store style and sees some snobby Mean Girls giving her the side eye. They walk over to her, but before they can even blurt out whatever insult they were planning she drops one of them with a knuckle sandwich. That accomplishes three things for the movie:

1. Establishes why she doesn’t have to go to school for a while
2. Gives her a record of “anger issues” so that people won’t believe her over Sadie when the shit goes down
3. Makes us think she’s pretty cool

And I like that their living situation, though unlike my life, seems more like somebody I would know than the people with the giant, brand new looking houses that would be going through this in the cable movie version. Chloe is far from the standard perky mother, she’s cool but kind of grouchy, has her daughter’s name tattooed on her. Those of us who tend to forget that AMERICAN BEAUTY was two decades ago may fear the sands through the hourglass represented by a teen star now playing the mother of the teen. But seeing Birch in this season of The Walking Dead and moreso in this, it’s clear that she’s very good and likely to have some great performances in her.

The three leads also have a strong chemistry that is key to making this feel a little more real and respectable than is standard for the form. The movie is surprisingly sympathetic toward Sadie and her various issues considering we know she’s going to be the fatal attraction or whatever. We feel bad for her, and at first she seems good for Nicole, having a fun time, but making her feel heard while also helping her understand and accept her mom’s point-of-view. And the sisters have an authentic bond when they sit down to talk about things and then drink beer and watch reality shows.

But of course that can’t last forever; the fuel of a movie like this is inappropriate and unreasonable behavior. It starts with Sadie going as “chaperone” to a teen party and not correcting kids who think she’s one of them. There’s an interesting contradiction between the sympathetic understandable motivations (depression about aging, envying the care free life of teenagers) and the villainous level of pre-meditation (wearing a wig to look like her niece, keeping her back turned to Derek and leading him into the woods). Honestly it gets more fun when she starts being less human and more of a phantom menace deliberately stoking misunderstandings not only between family members but also between Nicole and her best friend Shay (Shonagh Smith) over the fact that Chloe has been secretly seeing her dad (contemporary indie stalwart Macon Blair MURDER PARTY, BLUE RUIN, GREEN ROOM, THE FLORIDA PROJECT, LOGAN LUCKY).

I think an argument could be made that the better-characterization-than-expected approach blunts some of the trashy appeal of this type of story. I had the most fun when I was mad at Sadie for her craziness. On the other hand, it’s kind of thrilling to see something that seems safe for TV suddenly veer into legit-horror level gore for a minute. There will be wincing.

I personally don’t think they stuck the landing. The way it all ties together with a past event they keep referring to throughout the movie was not very convincing or satisfying to me, and there’s some awkward ADR that doesn’t help. But overall I had a fun time.

The screenplay is credited to longtime McKee collaborator Chris Sivertson, who I really respect for directing the excellent Jack Ketchum-based, McKee-produced movie THE LOST. He also did a fighting movie called BRAWLER and co-directed ALL CHEERLEADERS DIE with McKee, but who am I fooling? We all know him as the director of I KNOW WHO KILLED ME. What I didn’t realize is that in recent years he’s been directing and/or writing a bunch of thrillers like this, mostly for Netflix, but also two bonafide Lifetime movies: DARK INTENTIONS (2015) and MURDER-IN-LAW (2019).

I hope McKee has more MAYs and THE WOMANs cooking in his imagination, but until then I’ll keep watching these better-than-average programmers.

Caitlin Stasey Isai Torres Lifetime movies Lucky McKee Macon Blair Sasha Frolova Thora Birch
This entry was posted on Tuesday, March 31st, 2020 at 10:42 am and is filed under Reviews, Thriller. You can follow any responses to this entry through the RSS 2.0 feed. You can skip to the end and leave a response. Pinging is currently not allowed.