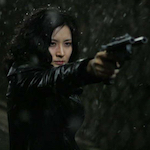 After 13 years as a model prisoner, people are saying Geum-ja is an angel. A Christian group in Santa Claus outfits waits outside to welcome her back into society, with a preacher (Kim Byeong-ok, OLDBOY) who seems to be her biggest fan holding a block of ceremonial tofu for her. As I’ve mentioned before, I love tofu and movies with tofu in them, so I was interested in its meaning.

“It’s tradition to eat tofu on release so that you’ll live white and never sin again,” he explains.

She reaches for it, but flips the plate over onto the ground and says, “Why don’t you go screw yourself?” Because she’s not your angel, sent down to confirm your Christian beliefs. She just had to play that part so they’d let her out and she could get some lady vengeance. Get the fuck out of her way.

Not that she’s unremorseful. She goes to the parents of the kid and cuts off one of her fingers for them. I doubt they got much out of that little display, but you can at least see that she’s trying to make amends. She puts on red eye shadow so people will stop thinking she looks so god damn “kind-hearted” all the time. The original title translates to KIND-HEARTED GEUM-JA, by the way. I like that better, actually, but connections to SYMPATHY FOR MR. VENGEANCE besides the retitling include a kidney transplant and a kidnapping for ransom where they justify it by saying it will bring the kid’s family closer together but the kid ends up dying and it inspires violent retribution. Maybe those are just things Park is obsessed with, but I suspect he wanted us to draw comparisons.

Geum-ja’s plan requires help from some of the people she knew in the joint who got paroled before her. As she goes to them we see their backstories and how she gained their loyalty. It’s a different kind of prison – clean, with pink and yellow walls – where a whole bunch of women all sit around in a room together. Some of the others are in for prostitution or adultery. A couple of them are real assholes. There’s this old lady called “The Witch” (Go Su-hee, THE HOST) who forces new inmates to eat her out. The scene where Geum-ja puts a lid on that business is a classic. You see somebody out of focus in the background doing something and then when you find out what she did… hilarious, satisfying, slightly disturbing. That’s how she became friends with Kim Yang-hee (Seo Yeong-ju), who now makes sculptures of women’s torsos holding severed heads by the hair. “People order them from me, modeled on their guys’ photos,” she says.

Park is pretty leisurely about revealing that (SPOILER) oh yeah, no, she didn’t really kill that kid. How she ended up taking the blame and how she gets back at the person responsible is a story as labyrinthine as the one in OLDBOY. It involves a teen pregancy and calling up a sleazy teacher who used to hit on her, Mr. Baek (Choi Min-sik, OLDBOY, I SAW THE DEVIL, LUCY), so she doesn’t have to go home to her parents. That’s the motherfucker she’s been planning to get back at for 13 years, and her preparations are so meticulous they involve planting a wife to keep track of him.

Park and editors Kim Jae-beom and Kim Sang-beom have crafted a masterful chronology between the mysterious past tense narration, the weaving of stories from before and during her imprisonment into the time after, and the tiny little flashes that make connections between those periods. And there’s humor in the editing. A favorite is when she has sex with her 19 year old co-worker (Kim Shi-hoo, THE CITY OF VIOLENCE) and leaves him in bed. “Going somewhere?” he asks, and it cuts to… Australia? Yeah, that definitely counts as going somewhere.

See, when she went down her daughter Jenny (Kwon Yea-young) was adopted by Australians (Tony Barry [GOODBYE PORK PIE] and Anne Cordiner), kinda like that kid in LION. Geum-ja writes a letter in English, brings it to the adoptive parents, gets drunk with them, makes friends. Jenny doesn’t speak Korean, but wants to go back to Seoul with her newly discovered biological mother.

This is how she gets her way:

Kinda takes after her old lady in the extreme behavior department. And Park gets across this major story point with just a couple of carefully staged, nearly still images.

By the way, I didn’t get a chance to watch it, but the blu-ray includes an alternate version of the movie (also given a theatrical release in South Korea) that slowly fades to black and white as the movie progresses. It’s hard to picture because the colors in the movie really pop, but I bet it looks good that way too. I saw a movie like that before – Barry Jenkins’ debut, MEDICINE FOR MELANCHOLY. I didn’t know it was going to do that and I thought I was going crazy for a bit.

Geum-ja also has a job at a pastry shop, working for a guy (Oh Dal-su, A BITTERSWEET LIFE) who once taught cooking at the prison and was “nearly shocked to death” when she used the prison’s “miserable” ingredients to make a raspberry mousse cake “fit for a king.” Her pastries look as incredible as they apparently taste – the chef’s hands are shaky, so she takes over making frosting flowers and makes something much more baroque than I imagine he was going for.

She’s also an artist when it comes to avengement, so it’s really important to her to commission the construction of a stylish two-barreled pistol, I believe basing the blueprints on one she used in a dream. The gunmaker (Ko Chang-seok, ROUGH CUT), bank robber husband of one of her former cellmates, doesn’t understand “all the fanciness” and warns her it won’t function that well. That doesn’t matter to her because “It has to be pretty. Everything should be pretty.”

And god damn is this movie pretty (cinematographer: Chung Chun-hoon [IT], production designer: Jo Hwa-seong [THE GOOD THE BAD THE WEIRD]). From the surreal imagery, like this strange dream…

…to would-normally-be-mundane things like the design of the apartment she stays in.

…but let’s just say it’s not gonna end pretty. Although LADY VENGEANCE is at least as odd and unpredictable as MR. VENGEANCE and OLDBOY, it seems for a while like it might be the most traditional in its treatment of revenge. Protagonist is horribly wronged, protagonist gets revenge, audience applauds. Certainly this Mr. Baek motherfucker deserves a comeuppance for kidnapping a kid and then killing him and then kidnapping Geum-ja’s daughter and forcing her to take the fall for him. But when she finds him she also discovers that it wasn’t just that one time – he moved from town to town like THE STEPFATHER, setting up new lives, getting jobs at schools and murdering kids that annoy him.

So she takes it to the next level. She gathers the parents of all his victims in an abandoned schoolhouse, shows them his snuff videos and souvenirs to prove he’s the guy, and reveals that she has him tied up in the next room. The organized nature of the thing – making everyone agree to participate, making them line up in the order they’ll torture him in, issuing them each a weapon and a rain jacket – takes the passion out of it and makes it easier to stop and think about it. This idea of revenge seemed much more glamorous when it was one cool-looking fictional character whose adventures we’d been enjoying. Now that it’s being prescribed as a means of justice for multiple victims from all walks of life – seriously, there’s even a class conflict while waiting in line – it feels more nauseating.

When they’re all done they sit together at the pastry shop after hours and eat a cake, because “I’m sorry. It felt like a birthday.” I was waiting for the reveal that it was made with his blood or something, but fortunately not. Just a cake, and probly an amazing one, since it looks like one of Geum-ja’s. They enjoy it and don’t even notice it’s snowing.

LADY VENGEANCE is a hell of a movie, maybe comparable to one of those cakes if the “miserable ingredients” are the gruesome facts of our sadistic and unfair world, with humor and personality stirred in and lovingly sculpted into something that’s beautiful on the surface and deeply moving on the inside. Geum-ja is a complex mix of flavors: crazy, badass, darkly funny, horribly tragic, arguably hopeful.

Throughout the movie people keep looking at her with concern and telling her she’s changed – I see two possible interpretations of this. One is that they only knew her when she was faking it, the saintly Kind-hearted Geum-ja, and they can’t handle the real her, the one who took over as The Witch before she got out. The one with the red eye shadow who’s allowed to be angry. But another way to see it is that the Geum-ja we see here is not the real one either. This is what she’s been pushed to, the one she must be to get her revenge, but then she wipes off the makeup and contemplates whether or not she can “live white and never sin again.”

In the final scene she holds out a white cake in the exact shape of the preacher’s tofu block. She offers it to her daughter, who does taste it, but she hesitates herself. Then suddenly she plants her face in it – crying? Scarfing down on hope for redemption? I’m not sure. And I kinda like it that way.

P.S. If you get Shudder, all three of the trilogy are on the U.S. version as of this writing.

Chan-wook Park Choi Min-sik Go Su-hee Kim Byong-ok Korean cinema Lee Yung-ae Olivia Hussey revenge See Yeong-ju
This entry was posted on Friday, March 13th, 2020 at 1:22 pm and is filed under Drama, Reviews, Thriller. You can follow any responses to this entry through the RSS 2.0 feed. You can skip to the end and leave a response. Pinging is currently not allowed.