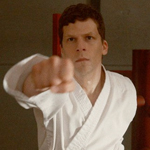 The timid nerd is Casey Davies (Jesse Eisenberg, CURSED), an awkward accountant for an unnamed company. The bros in the break room don’t appreciate him trying to join their conversations, his best friend is his dachshund, and he gets stomped by random motorcyclists while trying to buy dog food. I love the slightly surreal touches that convey his loneliness: the news report that describes him as “a 35 year old dog owner,” the robotic answering machine voice that says “you have only 1 message.” (Though not obviously tied to a specific time period, it’s one with audio cassettes, fat-ass analog TVs and large camcorders with carrying bags.)

Afraid to go out to buy dog food anymore, Casey applies for a gun permit, but then discovers the unnamed karate school that added rule #11, “Guns are for the weak” to their wall after their Grandmaster was killed by hunters who mistook him for a bird. (Sensei mentions the bird thing a few times.)

Casey joins the class, takes the lessons, asks lots of questions about the rules and culture of the school, especially as pertains to belt colors. Eisenberg is so good at these characters who are smart but emotionally and socially inept. In this case I think it makes him corruptible rather than an irredeemable asshole. There’s a funny character named Henry (KUMIKO THE TREASURE HUNTER director David Zellner), a blue belt student who’s very welcoming to Casey and shares his un-self-consciously childlike excitement about karate ranks. 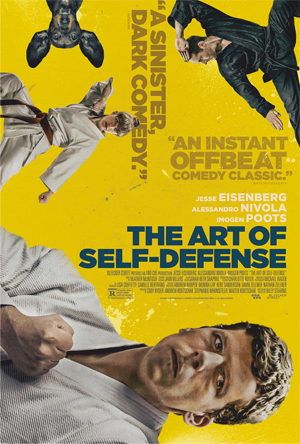 Nivola is great in this. At first I didn’t recognize him as Pollux Troy from FACE/OFF, and I believed his face as some veteran b-movie karate guy like Jeff Speakman or somebody. He deadpans lots of ridiculous bluster and horrible machismo, but he also seems kind of like a cool guy, at least for a while. I’m not sure if this is down to the movie or the innate flaws in male nature, but I could absolutely see and feel the appeal of trying to get a different belt color, trying to get a black stripe added to his belt, and the pride of being recognized by Sensei, complimented in class, invited to the night class. (“What time?” “It’s the night class. It’s at night.”)

Casey finds himself tying his yellow belt over his work slacks to feel empowered, then he makes the innovation of getting a custom-made yellow leather belt so it won’t be as weird. I love that the other students are blown away by this and start doing it too, even though theirs are brown or black, the standard colors for pants-holding-up belts. I get it, though – I can exclusively reveal that I have a collection of vintage belt buckles that for a couple years now I’ve supplemented with a custom belt that says “VERN” on the back, surrounded by eagles. I don’t tuck my shirts in, so nobody ever sees it, but it makes me feel cool, like Batman or Superman wearing their costumes under their day clothes. I’m sure this is similar.

Don’t tell anybody about that, by the way.

This improved self confidence changes Casey’s life, but he doesn’t always know how to use it properly. For example, when he impresses the office bros by throat-punching their boss like they joked about it’s not even a cathartic movie fantasy, because we saw that boss bend over backwards to be nice to him, even calling sheepishly to tell him he hasn’t come to work in a long time.

I hope this doesn’t feel disrespectful to actual karate people. It’s clearly about an Americanized exploitation that’s about showing off and, in this version, is sort of a cult preaching self-actualization through violence. It’s a story about alpha male bullshit, or what we currently call “toxic masculinity.” It’s woven in humorously, the way Sensei seems overly concerned with Casey’s name or dog or musical tastes not being masculine enough. Taking Sensei’s advice does make Casey feel better, because his need for a gun or fighting skills after the attack was not only for the practical purpose of self defense, it was also compensating for his feelings of helplessness. So the oppressed starts to become the oppressor. Self defense becomes self interest at the expense of others.

Sensei’s only female student is the brown belt Anna (Imogen Poots, GREEN ROOM), who teaches the children’s classes and sometimes rages at Casey for being an idiot. She seems like a person to fear at first, but becomes more sympathetic when you realize she has dueled to a stalemate with Sensei’s backwards views about women.

It’s not an action movie, and elaborate fight scenes would not really be appropriate, but obviously there’s some martial arts in it. The choreographer/trainer is Mindy Kelly, a stunt woman who apparently played Alita in their performance capture tests and who choreographed that Lady Gaga/Beyonce video “Telephone.” Eisenberg seems convincing as a beginning student. His kicks seem solid and his fists look huge. He’s taking it seriously, but not in a vain starving-himself-and-working-with-a-trainer Marvel super hero kind of way.

This is the second feature for writer/director Riley Stearns, after the well-reviewed FAULTS (2014) starring his then-wife Mary Elizabeth Winstead. (She would’ve played Anna, except…) I really like the feel he has here – a barren, generic town, people who speak oddly, an undercurrent of danger as this strange black comedy kind of turns into a thriller. It’s very unique. It’s on disc or you can watch it on Hulu if you want.

Alessandro Nivola Imogen Poots Jesse Eisenberg karate Riley Stearns
This entry was posted on Thursday, January 23rd, 2020 at 7:38 am and is filed under Comedy/Laffs. You can follow any responses to this entry through the RSS 2.0 feed. You can skip to the end and leave a response. Pinging is currently not allowed.

8 Responses to “The Art of Self-Defense”