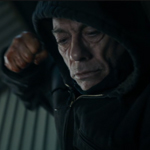 Don’t take that as a comparison in quality. REGENERATION is a masterpiece, I don’t think THE BOUNCER is. Nor does it have the same dosage or strength of action. There’s some vehicle and guns stuff that is REGENERATIONesque, but the occasional fights are raw and unexaggerated, more interested in brutal reality than cinematic flair. More RUST AND BONE than BLOOD AND BONE. Do not expect him to do the splits, do expect him to get knocked over and his face bloodied and he’s too winded to get up but maybe he’ll be able to roll over and shoot at somebody or crawl on top of them and punch their face in. Dour though it may be, I got a thrill out of seeing this broken-but-still-going type of Van Damme character in a movie that feels more artful and legit than the lower rent DTV stuff he sometimes ends up in.

Lukas is a security guard at a huge dance club. The opening montage paints a vivid portrait of what a boring job it must be. It follows him Dardenne-Brothers-style as he walks into work with his backback and hoodie, then it jumps through various moments from a shift, staying close on Lukas in the middle of the crowds or on the balcony looking down, listening to his earpiece, ignoring the fun and the thump thump thump, scanning the patrons until he sees trouble, or spacing out until his partner Omar (Kaaris, a French rapper who’s also in FASTLIFE and OVERDRIVE) taps him on the shoulder.

It must be kind of a relief when somebody falls over or throws a drink at somebody and they have something to do. But as soon as a scuffle starts and they go into action it will jump to later. More boredom. 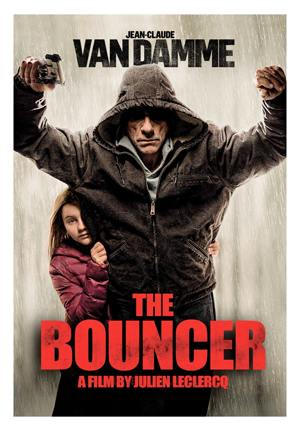 Bad luck hits in the form of some entitled douche who hits one of the waitresses. Lukas grabs him by the ear and drags him to the bathroom, but he pulls some “Do you know who I am? / I’ll have you fired” bullshit. Lukas truly doesn’t lay a hand on him, he only dodges a lunge, but the guy falls face first on the floor, and then he lays there motionless as a puddle of blood forms under him. So that was the story of Lukas vs. the son of a guy who works for the European parliament.

Apparently the kid didn’t die, but he did get his wish for Lukas to be fired. And just as he’s starting an iffy new job at a strip club Lukas gets dragged in for questioning by Maxim Zeroual (Sami Bouajila, THE SIEGE, THE NEST, THE CREW), some kind of Interpol guy or something who doesn’t believe Lukas’ story. He mentions that nobody knows Lukas’ last name. What’s he running from? Something that happened while he was a bodyguard in South Africa? Well, if he doesn’t want to get in trouble for it he has to bring Zeroual some information about his new boss, the Flemish gangster Jan (Sam Louwyck, BULLHEAD), who might be involved in counterfeiting.

So it’s got the usual undercover-in-a-gang stuff. He has to compromise himself in order to make Jan and his henchman Geert (Kevin Janssens, REVENGE) trust him. It’s an effective rendition of these cliches, especially when he stands helplessly as things go too far and people get shot. And there’s a pretty good version of that RESERVOIR DOGS moment where Mr. White vouches for Mr. Orange and we’re siding with Mr. Orange but also we know he feels like shit for betraying him. He has to help kidnap people but also unkidnap his daughter when they take her away from him. Both the unheroic and heroic sides of the violence coin. 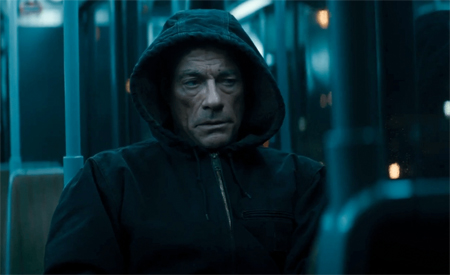 The tone is always solemn. Lukas looks tired and sad. His lonely existence is only warmed by his young daughter Sarah (Alice Verset), who is endangered by his situation. He eventually gains some connection with Lisa (Sveva Alviti), an Italian woman he’s assigned to drive for who is cold to him at first, but kind to Sarah.

The big fight scene is early on, when he’s brought into a room where he and the other job applicants are told “It’s simple. Last man standing gets the job.” He ends up on the floor for a minute but gets back up in time to take on a big heavy guy. Made me think of that early UFC where the kickboxer beat the sumo wrestler. It’s a long fight where they both get winded and have to rest and really he’s not so much “last man standing” as “last man who can still manage to prop himself up onto his knees.”

This is the first fight choreographer credit for Patrick Vo, who did stunts on JCVD (you know, the movie of that title). His second will be the upcoming 007 movie NO TIME TO DIE. He was also assistant stunt coordinator on RUST AND BONE, a fact I only discovered after having already mentioned that movie in this review, so I felt like I knew what I was doing.

I didn’t realize it while watching, but director/co-writer Julien Leclercq did a movie called THE ASSAULT that I reviewed back in 2013, which I called “almost like a French remake of DELTA FORCE” and “a solid procedural about a horrible event. Nothing real new or special, but pretty good.” This similar but probly a little better than that.

One note: It’s a French/Belgian production, filmed in Brussels. IMDb lists French as the primary language, but the American DVD only has an English language track. I think it’s dubbed, but it’s done well enough that I only suspected it when the daughter talked.

P.S. I also watched another 2018 JCVD movie called BLACK WATER, which I did not get as much out of. Van Damme’s character is a government operative who finds himself in a prison cell in a black site that’s hidden on a submarine. Dolph Lundgren is a cynical exposition-provider in the next cell over. (I like that he wears reading glasses and is working on some self portraits.) Van Damme flashes back to remember the mission and ambush that brought him there. Everyone’s fighting over some McMuffin that they accuse him of selling. Unfortunately, when it returns to the prison it feels cheap because there’s an overly long interrogation scene and then he escapes and teams with some reluctant allies to sneak around a couple of generic rooms that never made me believe they were on a submarine. Also Dolph’s screen time is very limited, though it is exciting when they finally briefly team up at the end.

Van Damme’s son Kristopher Van Varenberg has another small supporting role as a CIA guy or whatever and is now credited as Kris Van Damme. I think it would be funny for Jean-Claude to give his own son a spectacular death like an exploding head or something, but he defeats him just by bonking him against a wall.

bouncers JCVD Julien Leclercq Kaaris Kevin Janssens Sam Louwyck Sami Bouajila Sveva Alviti undercover
This entry was posted on Wednesday, January 22nd, 2020 at 7:06 am and is filed under Action, Crime, Reviews. You can follow any responses to this entry through the RSS 2.0 feed. You can skip to the end and leave a response. Pinging is currently not allowed.

6 Responses to “The Bouncer”