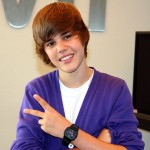 You see when I said GG Allin was the shittiest rock star who ever lived I meant that literally. One of this dude’s trademarks was that he would take a shit on stage and then wipe it all over his face and ass and throw it into the audience and etc. Or one time he takes a banana and sticks it up his ass and then mushes it up and throws it out there. Basically, he is like the most mentally illest motherfuckers you ever come across in the correctional system, but with a microphone. 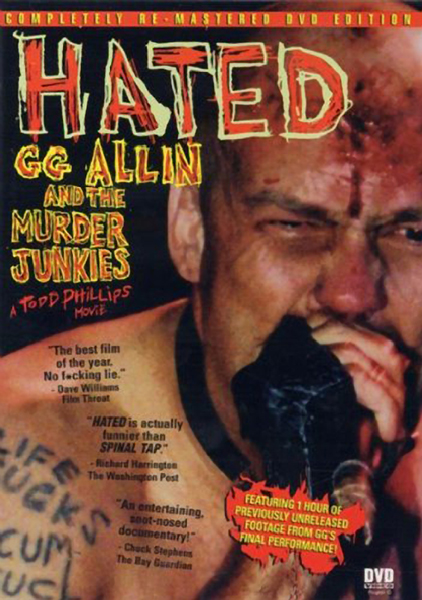 Now this guy had a small but very dedicated following of troubled alcoholic punks. And obviously they weren’t in it for the lyrics. But he was able to tour and do small shows and live his life as an outlaw. Personally I think he gave the lifestyle a bad name but what can you do man. He kept his one pair of pants and one shirt in a paper bag and must have crashed on people’s floors but god only knows how he bought food and drugs.

The documentary takes place when GG has just been released from prison and he agrees to break parole to go on tour so the film can be made. Every show he does seems to break into chaos in under ten minutes and end with this maniac pulling on his underwear and running from the cops or security guards all covered in blood and shit. Sometimes the fans jump on stage and kick the shit out of him. More often he attacks them, grabs some girl by the hair or punches some dude, then rolls around on the floor and starts shoving things up his ass. He says, “My mind is a machine gun, my body is the bullets, the audience is the target.” Which means, “I throw shit on people.” In his “spoken word performances” he does the same shit, he attacks people and cuts himself and then just starts calling everybody motherfuckers and robotic puppets of society.

I gotta be frank as well as honest, this great movie is not for the weak of stomach. And not just because there’s a video of his birthday party where a gal pees in his mouth and then he pukes all over himself and then takes another mouth full of pee. Even if you fast forward through that kind of garbage it is still very unpleasant to watch this dude. He is always naked and it is not a pretty sight. Even his tattoos are ugly as shit. I don’t know what most people consider entertainment but it is probaly not seeing a pudgy punk rocker strutting around all covered in shit, naked with his tiny little dick bopping up and down like a headbanging bumblebee.

I mean, the filthiest hippies in the world will probaly hop into the shower after watching this movie. Not because they feel bad for watching it. But you don’t want to take the chance that something splattered on you.

I wish I could wash the germs off from this movie but even the permanent mental damage, nightmares and emotional scarring it has caused me is probaly worth it for this fascinating freak show. Phillips extensively interviews GG and his brother/bassist Merle (who is more reasonable but has a bald head with giant sideburns and a hitler mustache) to find out what in fuck’s name made GG this way. He goes back to GG’s home town to play tapes of his music to his mortified high school band teacher. He even interviews a group of GG’s high school buddies who are a bunch of idiot good ole boys who know alot about guns and love jokes about wifebeating.

It is obvious that this illness came from somewhere, and you get a sense that it may have been passed on from his father who often threatened to kill himself and his family and even started digging the graves in the backyard. GG is also able to share the madness with his fans who are not always just thrillseekers. Some of them seem to actually admire him and wish they also had “the fucking balls” to wipe shit all over themselves and eat it and threaten to kill themselves on stage on Halloween.

Jesus, the things that are popular these days!

The entertainment value is unbelievable. This is the most “HOLY SHIT!” movie I’ve seen in a while. There is also a naked drummer who is as crazy, but less violent, than GG. And there is a former band member who quit not because he couldn’t take GG, but because he was jealous of him. He keeps bragging about what HE would do if he was GG (involving a mass cult suicide and/or presidential assassination) and about how it’s not that big a deal to bash your head with a microphone. I would almost think it was all staged if I didn’t see this fuckball shitting and then eating it in one shot.

As amazing as this documentary is, even more memorable is the “50 minutes of bonus footage” on the dvd. This is a home video Phillips made of GG’s last performance. Right after this video, GG had a drug binge and overdosed and died and then they put headphones on his bloated body and had a traditional funeral for him but the drummer was still naked when he helped carry the coffin.

I know right now it is considered cool to pretend you never liked the Blair Witch Project. Well I never even seen the fucking thing. But I think this video is probaly more intense. There are only a couple of edits so you get to see first hand and in real time the incredible adrenaline rush caused by hanging out with this shiteating maniac.

The footage starts with the “rehearsal”, where all the band members and the club owners are all swearing at each other about a soundcheck.

When the performance starts it is still daylight and they seem to be playing inside this little house. The hardcore fans and masochists are inside and there are others gathered outside looking in the door, for safety and hygeine purposes.

They only do about one and a half songs before the fighting and shitting and the tiny bumblebee dick start to be too much and there is mass chaos and apparently somebody from the club tells them they can’t play. It is hard to tell exactly what’s going on because the camera is shaking around, but if you listen to the conversations it sounds like the people who are there aren’t exactly sure either. There is a european guy dressed in all white who at first I thought was the one kicking them out, but then I think he puts his hand up GG’s ass. Not sure.

Then GG starts kicking things and whining “I wanna play, we came here to fucking play we wanna fucking play” and it’s virtually indistinguishable from the part where he was playing. And there’s this nutball fan who starts chanting “GG! GG! GG! GG!” At first I thought it was to be funny but it continues through the rest of the video. Turns out that former band member wasn’t wrong about GG being able to be a cult leader. Something about a guy who wipes himself with shit, I guess, it makes people like you.

So then GG goes outside and this is when it really gets good. You see this concerned teenage gal who says, “GG, you gotta put your shorts on!” Not wanting him to get arrested. The fans start breaking some windows and GG is shaking his bumblebee dick in front of unfortunate passersby and you can hear Phillips behind the camera complaining that he got shit on himself, not from GG but from fans who GG threw it on. And then a cop car drives by and GG runs and hides and then his entourage starts to try to get out of there.

But a big crowd of fans follow them. They keep trying to get a cab but what cab driver wants to help a bunch of punk rockers and a guy covered in shit escape from a small riot. And the fans are chanting “GG!” and GG goes back and forth between raising his arms in victory and telling them to fuck off.

This goes on for a long time until GG finally catches a cab and escapes to his destiny. Left behind, Phillips reconvenes with some of his buds to talk about how great the show was. There is a young gal who breathlessly repeats over and over “That was amazing! That was fucking amazing!” And for the first time you understand what the attraction is for some of these people. They know GG is a fucking nut, but when else can you experience that type of full on danger and nuttiness outside of prison, and for only seven bucks? It is similar to that thing they do in spain or whatever, where the bull is let loose on the streets and everybody runs like hell. Same thing, only GG had no horns and a smaller dick. I think Phillips started making his documentary as a joke but when he got to know GG he experienced the rollercoaster thrills and maybe even got to convincing himself that there was something important about the way his act pushed the envelope.

Well, there probaly wasn’t. But they sure had fun watching that shiteater run from the cops and a hundred punk idiots while his friends say, “This is Beatlemania! This is Beatlemania!” and another guy says, “You better not get any shit on my pants GG!” and every once in a while GG starts bashing his head into a pole or something. That’s what life is all about, man.

Todd Phillips
This entry was posted on Wednesday, January 1st, 2003 at 3:41 pm and is filed under Documentary, Music, Reviews. You can follow any responses to this entry through the RSS 2.0 feed. You can skip to the end and leave a response. Pinging is currently not allowed.

4 Responses to “Hated: G.G. Allin and the Murder Junkies”