Dickie is a former contender and now Micky’s trainer, but to be honest it doesn’t seem like his heart is that in it anymore. He spends most of his time pursuing his other passion, smoking crack. 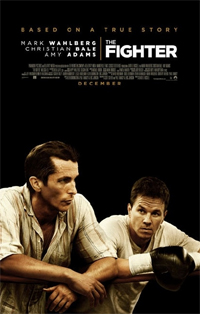 Micky’s got a big fight coming up, but Dickie’s always the center of attention because he’s got a film crew following him around. “HBO’s making a movie about my comeback!” he says, but the documentarians are pretty clear that it’s about crack addiction. (The actual documentary is called HIGH ON CRACK STREET, I’ll have to try to see that one.) Despite his troubles Dickie’s still called “The Pride of Lowell” and never gets tired of bringing up the time he knocked down Sugar Ray Leonard. Knocked him down. Not knocked him out.

Micky’s hotheaded mother (no shit, that was Melissa Leo? I didn’t even recognize her) is his manager. His dad (Jack McGee) seems more level-headed, but is outnumbered by the seven big-haired daughters who take after their mom and work together like a pack of wolves. Dad is kind of like the guy who knows everybody should listen to him but is resigned to the fact that they won’t.

Family is important to all of them so they don’t fire Dickie even though they’re pissed that his outside interests and hobbies (again, crack) interfere so much with Micky’s training, traveling, etc. They try to be all Pride of Lowell, get dressed up and take a limo to the airport before a fight, end up having to make an extra stop to chase Dickie out the back of the crackhouse.

In a way the movie is all about embarrassment. Micky is embarrassed to show his face in Lowell after losing again. Dickie is embarrassed for his mom to find him at the crackhouse. The whole family and town are embarrassed by the documentary. They want the pride back.

It’s also about running away or hiding from problems. Dickie’s always literally jumping out the back window and making a run for it. When Dickie’s in the joint Micky takes the chance to run from his family. He finally shuts out his crazy mom, stays away from the drama, and his career starts to go well. His family hates his new girlfriend (but I don’t, it’s Amy Adams) because she went to college and they think she’s a “skank.” She knows how to hide from her problems too (and hides from the viewers that she’s supposed to have a drinking problem) but she teaches Micky how to face up to shit. For example when the mom and all the sisters track her down and show up on her porch she not only goes out there to face them, she throws the first punch.

In fact it goes back to the very first thing we learn in the movie, when Dickie explains his fighting style as “squirrelly as fuck,” dancing around and dodging, as opposed to Micky getting in close and taking the punches. By the end of the movie I think they learn to stop being squirrelly as fuck about their relationships.

Wahlberg and Bale are both good handsomer Hollywood versions of the real people. Wahlberg is especially impressive in the ring. He and his partners took alot of hits to do the boxing scenes, which is especially noticeable in the last fight where they really seem to be beating the shit out of each other. Bale’s approach is pretty mega, appropriate I think based on the footage of the real Dickie, who obviously has to be the center of attention at all times. Bale also went down to MACHINIST/crackhead weight and shaved a bald spot on the back of his head, although it’s not very noticeable until a ways into the movie.

For personal reasons I choose to believe that the real girlfriend looks exactly like Amy Adams and her hotness is not an exaggeration. Because you gotta be able to believe in something, you know? It’s nice to see Adams getting to play a role that’s not sweet and naive. Good to get back to her CRUEL INTENTIONS 2 roots. Must be tough, though, always getting typecast as good looking.

The other characters are less Hollywood and really well cast. My favorite character is Mickey O’Keefe, the police sergeant who becomes Micky’s trainer. I’ve been telling people for the week or two since I saw this that it seemed like they just got the real guy to play himself, but until just now when I looked it up on wikipedia I didn’t realize that’s because they did just get the real guy. He’s very quiet and emotionally reserved, but throughout the movie you can read on his face the frustration that Micky’s family are getting in the way of his chances, and his genuine, humble loyalty to Micky and wanting to help him. Then when (SPOILER) everything works out and everybody’s jumping up and down happy he barely even smiles, but you can see he’s right there with them.

Leo as the mother reminds me a little bit of the grandma in ANIMAL KINGDOM. She’s much more openly hostile, but seems to have the same motivation of just wanting to be there with her kids no matter what. Maybe she kinda likes being the boss, and maybe she makes the wrong decisions sometimes, but I don’t think she’s a bad person. (I guess I wouldn’t say that about the gal in ANIMAL KINGDOM. I didn’t say they were the same. They just reminded me of each other a little bit).

I also gotta say they got an amazing performance out of a toddler. This tiny kid is supposed to be Dickie’s son, and he has two amazing reactions. One is in a scene where he wants to watch his dad on TV but they won’t let him, one is when his dad just got out of prison and he’s excited to see him, but things don’t go well. It’s weird that the kid doesn’t seem to have aged while Dickie was away, but oh well. The expressions this kid has and the things he does are so perfect it seems like pretty much exactly what they would’ve done if they decided to CGI the whole performance. Shit, maybe they did? It didn’t look like they did. I think they just found the Christian Bale of baby actors.

Or maybe it was Christian Bale. He not only took off weight for this movie, he took off age. He’s gonna have a hell of a time getting back into the right shape and age to play Batman again.

I’ve heard some complaints that this movie is classist or something, that it portrays not-rich people in a cartoonish and stereotypical light. It’s nice for viewers to be offended on behalf of the actual people who worked for years to get their story made into a movie and then worked closely with the production, but I don’t think it’s necessary. If you believe that it’s unfair to depict the women of early ’90s Lowell, Massachusetts as having big hair and being catty I think you’re being a little too sensitive. And whatever the crackhead lobby may say, it is actually true that the individuals of that persuasion are sometimes missing a few teeth. The movie is just reporting the truth when it comes to hair of the early ’90s and dental health of the crackheads.

Also, please take note of the real guys shown at the end of the movie, and tell me with a straight face that the good looking Hollywood versions of them are an unfairly stereotypical portrayal. If all movies portrayed all white people like this that might be a problem, but that’s not the case in my opinion. In INCEPTION the white people wear ties, for example.

By far the most cartoonish character in the movie is a movie buff with a sweater around his neck who says he hears good things about the cinematography in BELLE EPOQUE. And that’s the only guy I felt like I was supposed to hate. I think you gotta acknowledge that the movie ultimately likes all these people. Not in a condescending “isn’t it adorable?” My Name Is Earl type of way, but in a they’re-flawed-but-they’re-my-family type of way. Micky is the protagonist and he’s stuck between the different factions, but he believes they’re all his people. They’re his blood and his neighbors. He wants to be the Pride of Lowell, not the guy who got out. And he wants his brother on his side. He wants to be the Pride of the Pride of Lowell.

THE FIGHTER really got me by having the equivalent of that rare achievement I love in action movies, the simultaneously occurring action and emotional climaxes. I guess you could say that about most sports movies, but I think this one is a little different because (SPOILER?) winning the fight really feels like a supblot, a side issue, an extra bonus. It’s the way all the family drama is resolved that I found myself rooting for and excited about. I’m sure it didn’t wrap up that neatly in real life, but watching the movie I bought it. Consider my heart warmed.

Amy Adams boxing Christian Bale David O. Russell Mark Wahlberg Melissa Leo
This entry was posted on Tuesday, January 11th, 2011 at 11:22 pm and is filed under Drama, Reviews, Sport. You can follow any responses to this entry through the RSS 2.0 feed. You can skip to the end and leave a response. Pinging is currently not allowed.

35 Responses to “The Fighter”