Vern abseils into THE DESCENT PART 2

Well, anyway, you’ll see what I think when you read the review. But please take special note of the authentic spelunking lingo used in the headline. They don’t always use my headlines over there but in this case they did. I researched that shit. It was awesome.

Well, they probly shouldn’t’ve made a DESCENT PART 2, but the one they made is not too shabby. It has just the acceptable level of shabbiness. It’s by rookie director Jon Harris, who edited the original THE DESCENT and to his credit not DOOMSDAY. 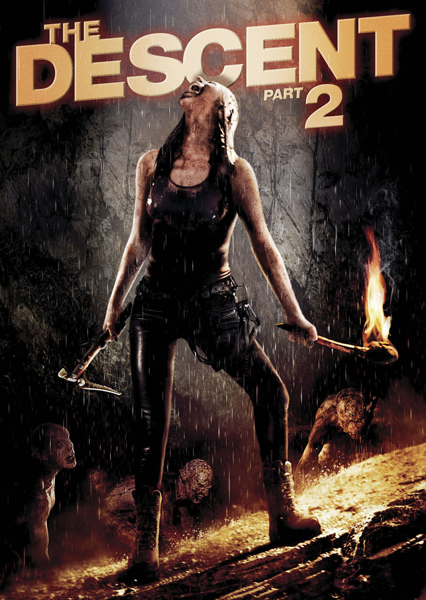 I respect them for using the archaic “PART” in the title, and using it correctly. It sure does pick up right where the original left off (well, at least where the American version left off) with the woman Sarah (Shauna Macdonald) back on the surface running around like a Texan after a chain saw massacre. A search team is already looking for them (because Juno is a senator’s daughter) and when they find Sarah she’s so freaked out she doesn’t remember what happened. So they kind of bully her into re-descending with a couple of cops and spelunkers to find her friends.

There are many enjoyable elements. The monsters, known (only to me) as wufs (weird underground fuckers) are still cool looking when they get to them. It starts off slow and quiet and works its way up to some savage woman-on-wuf cave fighting. There are several worthwhile moments of disgustingness (done the old fashioned way, without the computers). It seems to keep a strong continuity with Part 2, so the bodies are still in the same places and in one stand-out scene they’re forced to use a hanging corpse to swing across a gap. At least one character thread from the first one is continued and brought to fruition. There are a couple surprises.

On the other hand though it’s not quite as well-executed, not as perfectly claustrophibizing, and of course it doesn’t have the same freshness factor. Because it’s Part 2. If they were gonna continue the story shouldn’t they have had Sarah start out where she got to at the end of Part 1, so there’s more progress? In Part 1 she went through alot and grew into a bad bitch who handily beat a wuf to death with a bone, but in this one she starts out timid again, and it’s a ways into the movie before she gets that demeanor and knowledge back. That feels like an unnecessary setback. We don’t deal with nobody believing her, because she doesn’t remember the thing they wouldn’t believe her about it. We kind of start over.

And what about some escalation? I’m not saying turn it into an ALIENS ripoff, but wouldn’t it be more fun to change shit up than to just try to re-do the same kind of thing with some men this time? Instead of coming down unaware again and having to use inadequate spelunking equipment as weapons again and using the same nightvision camcorder again because they find it on the ground, how ’bout they come down with an idea what they’re in for and come well-equipped? It would still be difficult to deal with those blind bastards, especially if they cut deeper into the nest and got overwhelmed. And they can’t blow the place up without it all coming down on top of them.

The good news, I think, is that they don’t introduce some new Superwuf that’s bigger or has different abilities. I mean that’s bad in that it’s the same shit again but it’s good in that it would seem like a pretty forced sequel formula if they did it. Maybe we could’ve seen some babies though, or wufllings I believe they’re called. I bet they’d be adorable. I wonder if they are human baby sized or if they fit inside a thimble.

Also good news: they don’t reveal that they’re part of a secret government program or from space or any stupid shit like that. I guess they do kind of reveal… something. Well, I’m not sure I get what happens late in the game. But it’s something.

If they decide to make a part 3 I hope it’s about they catch one of those things and try to use it as a police witness, but one of the detectives is real scarred and lonely because he had a son who died in a car accident so he takes it home, puts clothes on it and starts to home school it, and then it turns out to be a piano prodigy or a really good baseball player or something, but unfeeling state bureaucrats try to put it in a foster home or a zoo and there’s a big emotional court battle. But the state wins so they realize they have to put him back underground before he gets taken into custody. And then once a year the detective goes spelunking and meets his boy in a special place and they play catch. Then in part 4 he doesn’t show up one year because he’s been set up for a crime he didn’t commit so the wuf has to come to the surface and pass for human long enough to prove he’s innocent and get revenge.

Or they could just have some different people go into the cave and get eaten. We’ll see which approach they prefer.

DTV DTV sequels
This entry was posted on Tuesday, April 27th, 2010 at 12:31 am and is filed under Horror, Reviews. You can follow any responses to this entry through the RSS 2.0 feed. You can skip to the end and leave a response. Pinging is currently not allowed.

13 Responses to “Vern abseils into THE DESCENT PART 2”