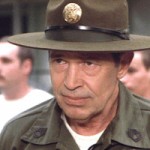 I don’t know if you are familiar with cockfighting, cock is a term for rooster and what they do, they put two roosters in a circle and have them fight each other. Sometimes they put little metal hooks on their legs to make them more deadly. You know, it is basically like the dog fights we have up here but this is what they do in the south, because chickens are more readily available I guess.

I know what you’re thinking, chickens are pussies compared to dogs. But they’re not. I mean you should see these fuckers fight. The feathers on the back of their neck stick up like a cobra and they just start tearing into each other. I mean it’s creepin me out.

You probaly remember the actor Warren Oates, from Alfredo Garcia. He’s not the guy from the singing group Hall and Oates, he is an actor. Well here he plays an individual so dedicated to his sport of cockfighting that he has taken a vow of silence. In a flashback you find out that he lost one of the big derbies because he was shooting his mouth off about how great his rooster was, until Harry Dean Stanton challenged him to an off-the-record match in a hotel room. Of course, his bird was killed and he missed his big chance to win the Cockfighter of the Year medal which all young boys dream of getting when they grow up. So from that point on he stops talking in order to protect his career.

So the movie is kind of like any other sports movie, except with cockfighting. Warren takes on a new partner, he buys and trains new birds, he enters big matches. He has his old arch rival harry Dean Stanton stirring up trouble and marrying his old girlfriend. There is one guy who tries to cheat but they catch him and beat him up. There is an armed robbery.

Now if I understood correctly, cockfighting becomes illegal at one point of the movie, that must be why they decide to have their tournament in a hotel room. And I don’t know about you but I think it is kind of sleazy to see chickens fighting in a hotel room. Then there is a pile of dead chickens in the bath tub. I don’t know man I don’t think that’s what god intended for the hotel room. But what are you gonna do I guess.

I wonder how they filmed this anyway though, because these are obviously real chickens killing each other. Also warren cuts the head off one with an ax and I think that was real.

Basically, this is a short, simple film but it works because it’s a sport that has rarely been given a quality treatment on the silver screen. Monte Hellman is a good independent type director and he has created easily one of the best cockfighting movies. It explores the universal themes like what do you do when you love a women but you also love a sport, in this case cockfighting, and the woman wants you to choose? What I mean is, this is a good movie because it is just like other movies except with chickens fighting each other.

To be honest though I have to say that I have a problem with cockfighting. I don’t want to sound like a prude or “political correct” but I’m not sure these guys who make the chickens fight each other to the death should really be glamourized. I mean all they do is hold them at the beginning, it is the chickens who should be getting the credit for this great sport.

I saw and reviewed this movie several years ago but since then I’ve become a big fan of Charles Willeford, who wrote the book that COCKFIGHTER is based on. There are two other movies based on Willeford novels, MIAMI BLUES and THE WOMAN CHASER. I like both of those movies, but COCKFIGHTER is the ultimate Willeford movie for the following reasons.

Willeford led an interesting life. He was an orphan, a hobo, a war hero, a pulp writer, an actor (during this one movie only), later a writing professor. As far as I’ve read, he was not a cockfighter, but I have my suspicions. He is not a great actor but he is passable as Middleton partly because he is obviously an interesting character. He doesn’t look or sound like a typical guy you’d see in movies.

I still think COCKFIGHTER is a good movie, but like most movies based on books, if you read the book you’ll see how much the movie is lacking. One thing that makes it different is that the entire book is told in the point of view of Frank Mansfield. He has taken a vow of silence, he doesn’t talk. He does a little bit of narration in the movie but that’s not the same as seeing the whole story from his POV so you know what he’s thinking all throughout. So it’s pretty different.

The movie follows the story of the book pretty much except they understandably dropped a subplot about Frank playing guitar. After he loses the trailer in the bet with Burke (Harry Dean Stanton in the movie) he needs to build up enough money to buy some chickens and return in the next season. So he gets a gig playing guitar at a club, and through that he meets a rich lady who figures into the way the book ends. There’s also a smaller subplot about an old pharmacist friend who’s trying to market a commercial drug called Licarbo. So it’s not all about chickens killing each other.

But, speaking of chickens killing each other, that stuff’s a whole lot more interesting in the book too. At least for me, because I am not all that into sports so I don’t really know what’s going on in these fights in the movie. But in the book he explains in detail how the matches work, what sort of strategy he’s using, what he feeds the chickens and why, how he nurses certain injuries, why it’s illegal for Junior (Steve Railsback in the movie) to touch his chicken’s balls, etc. The information in the book is so detailed and so clearly authentic that you have to wonder how exactly Willeford came about this knowledge.

The ending in the movie is good, but the way it pans out in the book is even better. I’m gonna turn this into Oprah’s book club here for a second so if you haven’t read the book yet you should go finish it right now, then immediately come back and read the rest here. Okay, good. There is such a tragic irony to what happens at the end that it’s so much more powerful than the little laugh in the movie. Instead of a nameless rooster, Frank’s bird is Icky (short for Icarus), a beautiful bird he’s been conditioning all throughout the book and considering his top bird. Just like in the movie, Icky wins by dying with his beak biting the other bird, who’s also dead. But Frank is surprised to find his eyes watering up. He is actually upset to lose Icky. Just then he sees his fiancee running away and he not only chases after her, but he yells out her name. So within a minute or two here he has had two major changes to his character: he’s felt emotional about the death of a chicken, and he’s broken his vow of silence because of his love for this woman. Even more dramatic, he knows he could be minutes away from his goal of becoming Cockfighter of the Year. If he just holds onto the vow for another few minutes he might be able to end it. Instead, at the last minute, he breaks the vow for his woman.

He has these two major breakthroughs but what makes it tragic is that she doesn’t even notice, she chews him out for being heartless and never picks up on the significance of these two things.

If you haven’t read the book, check this out. You already know what it’s about, right? Cockfighting. Here’s the quote that opens the book:

“What matters is not the idea a man holds, but the depth at which he holds it.” –Ezra Pound

If that is as beautiful to me as it is to you, you gotta get this book.

Anyway, that’s all for my update here. Now I gotta track down the book Willeford wrote about the making of the movie.

Charles Willeford Harry Dean Stanton Monte Hellman Warren Oates
This entry was posted on Thursday, July 6th, 2006 at 3:50 pm and is filed under Drama, Reviews. You can follow any responses to this entry through the RSS 2.0 feed. You can leave a response, or trackback from your own site.

One Response to “Cockfighter”