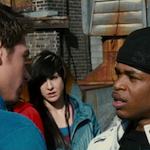 “I don’t know much about hip hop, but I know parkour, and I think your idea of puttin the two together is wicked,” Justin says. He’s played by a real free-runner/stuntman, and there are multiple jokes about him shocking everybody by suddenly running and jumping off a roof or something instead of just taking the stairs like a normal human being.

In the tradition of YOU GOT SERVED, Yuson is the lead but is much more uptight and less likable than the best friend character Easy (Sho-Tyme, who was a background dancer in YOU GOT SERVED, so maybe there’s continuity here after all). On the other hand Easy is weirdly territorial and jerky around the parkour guy. Anyway, they dream of winning the contest so they can stop “packin crates” for a living and be in a Jay-Z video (this is never mentioned again so I think it’s a hypothetical and not an official prize in the contest as with Li’l Kim). 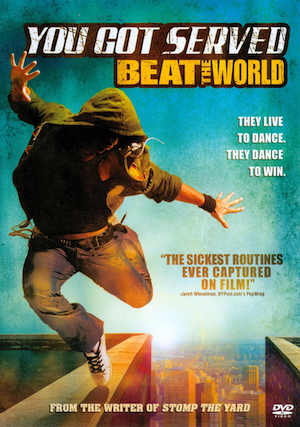 To me this crew seems older than the one in the first movie, but Yuson’s girlfriend Maya (Mishael Morgan, The Young and the Restless) lives with her parents, might be moving away to go to college, and gets pissed at him when he pulls a dad-forgot-the-little-league-game-or-music-recital with her very important ceremony to accept “The Economic Award For Excellence.” It’s one of those love stories where the guy is supposed to be fucking up but relatable, but every failure he has you just think “Come on, dude, that was a very easy thing to not fuck up.”

But one thing that’s cooler than YOU GOT SERVED is that it also spends time with characters from other crews in Germany and Brazil. This guy Eric (Christian Loclair) in Berlin leads the crew that won the last three Beat the Worlds. He’s just as much of a villain as Wade in part 1, and is even introduced on a video just like Wade. He’s another cocky white guy and he wouldn’t necessarily seem like a stud except that he is a really good dancer, so you can understand how he justifies being such an ass. They spend enough time developing him that I wondered if he’d have some kind of redemption. He’s too much of a dick for that, though – we first see him being a womanizer, then manipulating the rest of the crew to screw Nina (Stephanie Nguyen, STREETDANCE 3D) – who dumped him for cheating on her – out of her chance to choreograph their routine. And he ends up hitting on Maya to psyche out Yuson. I do believe he breaks three hearts in one movie.

And then in Brazil there’s Cherry (Nikki Grant, “Camp Star Dancer,” CAMP ROCK 2: THE FINAL JAM) whose problem is an idiot brother (Shane Pollard, “Resistance Fighter [uncredited],” TOTAL RECALL remake) with gambling debts. During the competition Easy falls for her, and Yuson assumes she’ s up to no good, but Easy is right and there is true love in the world and what not. (Optimism is not frowned upon in dance movies.)

My favorite thing about this movie’s depiction of dancers is that they all primarily dance on rooftops with spectacular views. There are multiple scenes where a character is dealing with some shit so they go to the roof to dance it out. There’s even one that intercuts between three characters in three countries dancing it out while overlooking their respective cities. (Cherry’s view is the most impressive.)

The competition takes place in Detroit. I didn’t understand until late in the game that Fusion is from “across the bridge in Windsor, Canada.” So this is not a victory for the stars and stripes. I don’t know where our dancers placed, but they must’ve been in there somewhere, because there’s a wide variety of crews with different outfits and gimmicks. (It made me wonder why Seattle’s multi-championship-winning collective Massive Monkees never did one of these movies. They actually have a big presence in the city with a studio with a publicly accessible studio with their logo on the window and everything. I might think it was fake if I saw it in a movie.)

One complaint (a major one): they end up barely using this parkour gimmick. They’ve been practicing and keeping it secret since the first scene of the movie and then all it really amounts to is setting up a wall on the stage that they run up and flip off of. STEP UP would’ve taken it further – this is a fact. Oh well.

One thing that’s pretty funny about BEAT THE WORLD’s official YOU GOT SERVED sequel status is that it actually has somebody saying “Now you’ve been schooled” at the climax. It must’ve been so tempting to redub it as “you got served.” It was right there. I hope there was one executive absolutely fuming that they left it sitting there while the others stood up for the artistic integrity of the filmmakers (and laziness of not having to go into the recording studio).

Chase Armitage Christian Loclair dancing Mishael Morgan Nikkie Grant parkour Robert Adetuyi Shane Pollard Sho-Tyme Stephanie Nguyen Tyrone Brown unrelated sequel
This entry was posted on Tuesday, November 17th, 2020 at 10:14 am and is filed under Drama, Reviews. You can follow any responses to this entry through the RSS 2.0 feed. You can skip to the end and leave a response. Pinging is currently not allowed.