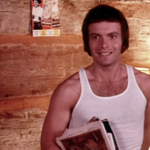 But seriously it’s pretty good. The essay also says that POOR PRETTY EDDIE was made by filmatists who had worked in porn, but that they came up with something of a higher quality than that implies. Despite their efforts the movie drifted through drive-ins for 10 years, re-released with many different titles and marketing angles (rape-revenge, redneck movie, blaxploitation – none of these are quite accurate), never really catching on. You can find alot of different cool posters for it under different titles, but when I first heard about it it was on DVD with this inexcusable and bizarrely inaccurate DTV serial killer movie type cover: 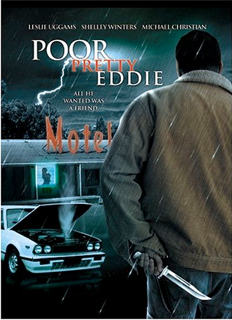 It’s funny because it kind of seems like somebody described the plot of the movie to the artist but didn’t let them see it so they wouldn’t know what it looked like. I get what the individual elements are there. Yes, there is an inn involved, so they put in a motel. There’s a broken down car, so they include an entirely different era and style of car (right color, at least). There’s a redneck psycho, so here is a redneck psycho with no resemblance to the physical characteristics of the actor or his costume or the era in which the movie was made. And it’s ugly anyway. They obviously thought the movie was a piece of shit and just figured if they could trick somebody into thinking it was a recent piece of shit then that would be good enough.

Apparently it’s in the public domain though, so somebody who knew it deserved better tried to clean up a 35 mm print and put it out on blu-ray. 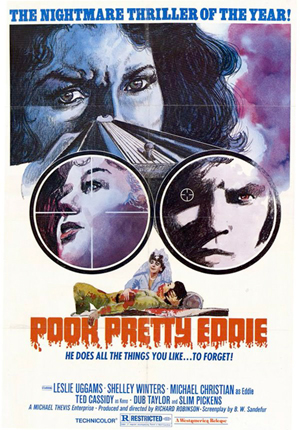 The story’s pretty simple. A famous soul singer named Liz Wetherly (Leslie Uggams) tries to take a vacation in Georgia, her Rolls Royce breaks down and she gets stuck renting a cabin from some backwoods weirdos who drag their feet fixing her car and have views on gender and race that make last year’s crop of GOP politicians look like– well, no. They don’t make them look like anything. They are very similar views.

The Eddie of the title (Michael Christian) is the guy that rents her cabin to her and doesn’t fix her car. He also gets it in his head that she likes him, and when her response to him showing up shirtless in her bed is to knee him in the balls he rapes her. At this point we want her to get revenge, to spit on his grave, but unfortunately we get a more real life result: she doesn’t know what to do, the locals don’t take it seriously, they even blame her, and she still can’t leave ’cause she needs the guy who did this to her to repair the transportation.

Eddie doesn’t seem to understand that he’s an attacker, he thinks she’s his girl now, and that he has a duty to make her “decent” and marry her. When she tries to get a ride out of town and gets abused by yet another redneck, Eddie shows up and attacks (kills?) the guy, and punishes her for it. Like a jealous boyfriend that caught her cheating.

There’s definitely some racism in him, but he’s okay with her because she’s a celebrity. It’s like in DO THE RIGHT THING when Pino was explaining why he’s okay with Prince and Eddie Murphy. But also Eddie has a dream of being a celebrity himself, and attaching himself to her fame is the only shot he’s ever had at pulling it off, so he has to jump on it. He’s got some of that Rupert Pupkin desperation.

He tries to take her on dates. He gets all dressed up with his George Jones hair and Elvis jumpsuit and has her take publicity photos of him doing different guitar poses in front of a waterfall.

Christian hasn’t gone on to much, but maybe he would’ve if people had seen this performance and taken it seriously. He’s completely convincing as a clueless psychopath, not your typical horror villain but just a sicko who genuinely believes he’s a good ol’ country boy and can’t understand when things don’t go his way.

And actually I don’t think she’s really fair to him when he sings for her. Of course this is irrelevant to the later events, but I feel like she could’ve been more polite in her assessment than saying she doesn’t like that kind of music but it’s better than some she’s heard. Kind of interesting that you’ve got this racism and misogyny element but also you can’t deny that she’s an entitled, classist tourist who treats the locals condescendingly before they do her wrong. I don’t know, it makes it more complicated, which is good. But I wouldn’t mind if she was more sympathetic. In a normal situation where the locals aren’t all psychos I would never side with this rich jerk in the Rolls Royce.

There’s a great cast of supporting weirdos too, most importantly Shelley Winters (CLEOPATRA JONES) as Bertha, a past-her-prime burlesque queen who’s sort of Eddie’s girlfriend and clings onto him jealously. When Liz tries to appeal to her sympathy as a woman you realize just how tragic Bertha is as she coldly explains why she’ll do anything to keep Eddie around. He treats her like shit and she knows it but if he puts his arms around her or kisses her neck or something she’s crazy for him again.

And Ted Cassidy (Lurch from the original Addams Family TV show) plays a really interesting character, a quiet, menacing behemoth who might be more on our side than the other people here. We hope.

The creepiest character is the sheriff, Orville, played by Slim Pickens, because he seems like a harmless and kinda lovable hayseed, but he’s terrible. He keeps acting like he’s being nice and reasonable with Liz, and I’m sure he believes he is. But he keeps downplaying the rape like it’s some petty crime and that it won’t be the end of the world if he can’t prove anything. Then when he puts on a sort of town meeting/trial he lets the locals tear Liz’s shirt off as “evidence” and can’t hide how excited he is about it. And then the worst of all is the next day when he apologizes on behalf of the town, and seems to really believe that’s gonna smooth things over!

There’s shades of Tobe Hooper all over this thing, but it was shot in ’73, before TEXAS CHAIN SAW MASSACRE came out, so it’s gotta be a coincidence. Despite the potentially sleazy subject matter the opening sets an artful tone. First we see Liz in a stadium singing the Star Spangled Banner, and they seem to have filmed her performing before a real game. Then it goes directly to credits over scenes of a creepy rural area with no people around, just a waterwheel spinning and creaking. It’s a filmatic explanation of how Liz feels going from her heavily populated natural environment to this horror show out in the boondocks.

David Worth Leslie Uggams Michael Christian Shelley Winters Slim Pickens Ted Cassidy
This entry was posted on Thursday, March 21st, 2013 at 1:25 am and is filed under I don't know, Reviews. You can follow any responses to this entry through the RSS 2.0 feed. You can skip to the end and leave a response. Pinging is currently not allowed.