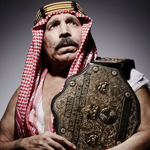 It was also a time when some people, due to economic anxiety or whatever, didn’t understand that these were fictional characters. Many Americans presumably believed that the Iron Sheik was real, that this Persian man was behaving this way not because he was an entertainer, but because those guys really hate America, you know? And  in the copious vintage footage included in this very enjoyable 2014 documentary by director Igal Hecht we see the red-faced fury of some of these fans. In interviews we hear about the danger of the Sheik’s “heat” from the crowd, people showing up with guns and shit. Every great heel tells a story like this (the wrestling villain’s humblebrag), but I bet the Middle Eastern angle means he had to be even more careful than Roddy Piper did. 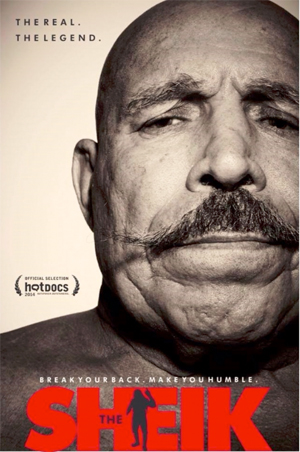 It’s almost too trite to point out, but there’s a direct line from this ritualistic hatred of cartoon foreigners to the campaign rallies and now actual policies of WWE Hall of Famer and temporary President of the United States Donald Trump. Hyperbole, distortion and bold-faced horeshit is spewed without regard to anything but riling up the crowd, painting the most juvenile story of good vs. evil in an attempt to get hearts beating fast and people screaming. All that matters is selling tickets and t-shirts. Any other consequences are not considered.

A few years ago I reviewed a short doc called SOUTHERN DISCOMFORT, about an independent wrestling event in a high school gym. An aging Iron Sheik was the headliner, and I was fascinated by the cuts from his backstage interviews about his love for America to the intense go-back-to-your-country booing of the crowd when he came out. The irony is even deeper now, with Trump attempting to ban the Sheik’s countrymen from crossing our borders, while he’s an example of a great Iranian immigrant who accomplished the American dream – by creating pop culture’s pre-eminent caricature of the Evil Arab.

That’s some of the stuff THE SHEIK makes me think about while watching it today, but it doesn’t go directly into those issues. Instead it’s a great portrait of a complicated man and an extraordinary life, with that mix of Wrestlemania highs and high school gym lows that the best wrestling stories have, with the added appeal of his unique background and personality.

The doc starts with an Iranian historian, and photos of handsome young Khosrow Vaziri, champion amateur wrestler and bodyguard to the Shah. We learn about his idol, Takhti, who he says was “the best wrestler in Iranian history” and sort of a Muhammad Ali type of iconic athlete because according to legend he told the Shah to stop giving him lavish gifts and instead spend the money on the people and the infrastructure. Which didn’t go over well. 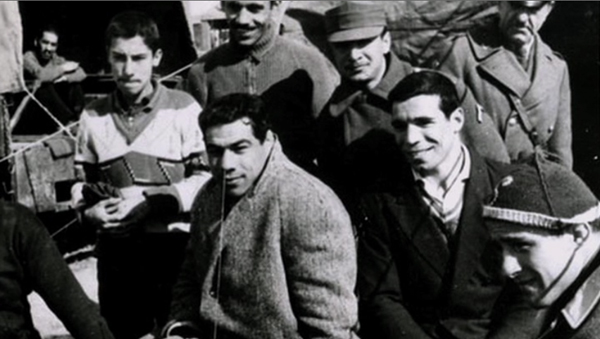 Allegedly Takhti committed suicide. Not believing that and disillusioned about his country, future Iron Sheik Vaziri decided to move to Minnesota, where he became assistant coach to the U.S. Olympic wrestling team. Later he met certain people and this led into doing the professional wrestling, and somebody suggested he wax his mustache and wear curly boots and play up his heritage as a villain, and then the Iran hostage crisis happened…

So we’ve got all this fascinating stuff about his background in Iran, and we also have some more standard wrestling biography material like various legends (Jake “The Snake” Roberts, Mick Foley, etc.) talking up his place in history. They really emphasize his part as the bad guy who Hulk Hogan got the title from, the theory being it had to be a truly great villain to create the momentum for Hulkamania to take hold. The Rock is in the movie quite a bit too and seems to genuinely love the Sheik – he even talks about being babysat by his wife.

It’s pretty funny to meet the family of the Iron Sheik, because they’re just normal people who are used to having a guy like that in their family. One of his daughters remembers kids at school asking her if wrestling was fake, and she says she didn’t understand what that even meant. She also talks about neighborhood kids being afraid to come over because he would blow a whistle like a coach and make them exercise. 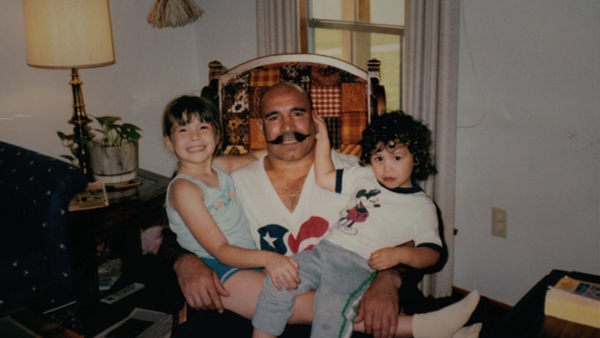 Like other wrestling biographies there’s a terrible drug addiction. But this too has a unique spin on it because of the infamous incident of Sheik bumming a ride with Hacksaw Jim Duggan and getting pulled over with a bunch of cocaine and pot on him. Somehow they make it to their match anyway and they don’t say anything and they almost think they got away with it… until it’s in the newspaper.

And yeah, the crime and the coke addiction are bad but WHAT THE FUCK IS THE BAD GUY DOING  HANGING OUT AND SMOKING WEED WITH THE GOOD GUY? Vince McMahon fires him, worried that he has doomed the entire industry with this faux pas.

So all the sudden Sheik is almost losing his house and having to wrestle on the independent circuit. He misses the 93,000 people of Wrestlemania III, but “I didn’t have a choice and I love my business,” so he kept working. “Something better than nothing.”

Brothers Jian and Jake Page are producers and writers of the documentary and become major characters. Growing up they were family friends of the Vaziris. Years later they saw Sheik at some small time event at a bar in Toronto and reconnected, coming to his home to look after him when it was clear the drugs were a problem. There’s alot of home movie type footage from over many years and there are two scenes in particular that are shockingly intimate:

1) A sort of spy camera shot from outside of a house that he came to late at night to buy drugs. As he waits for the dealer to come out he unenthusiastically answers a girlfriend or wife’s small talk questions. Yes, he used to wrestle. Sheik, they called him. Surreal.

2) An intervention, which does not go so well.

It’s hard for him to quit when his body is so torn up and his career with it. His young friends accompany him and try to be supportive but he does things like limp into a Chuck E. Cheese type restaurant with his championship belt over his shoulder so that people will want to come up and take photos with him. Eventually he does clean up and sort of by accident, with help from these guys, he regains the spotlight by saying crazy shit on Youtube videos and social media. They come up with stunts to get him attention, like bringing him to a Rob Ford press conference to yell out that he’s the real mayor (it doesn’t show what happened). Honestly this stuff is kind of more sad than the small time wrestling gigs, except that he seems to enjoy it and you can see, and understand, the adulation he gets from fans (as well as other icons of ’80s wrestling reuniting at a convention).

There’s a montage of him posing for photos with various celebrities, from Snoop Dogg to Adam Sandler. There’s footage of Mos Def meeting him backstage at something and you can tell it’s totally surreal to him to suddenly see this figure from his childhood standing there. I’m sure you could have met and worked with every celebrity in the world (Mos was in a Michael Jackson video as a young man, for example), it’s still gonna be shocking to see a bad guy from the Hulk Hogan’s Rock ‘n Wrestling cartoon just standing there looking basically the same as he did 35 years ago.

Here’s one where Snoop looks more excited to be in a picture with the Sheik than vice versa. 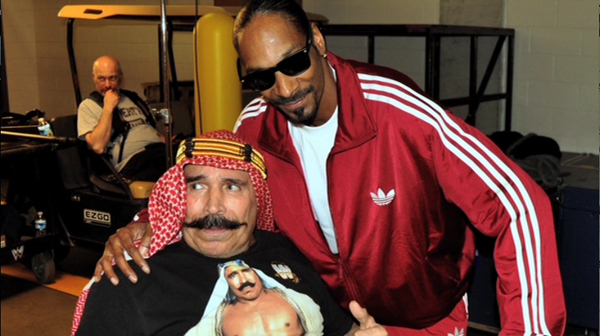 On the other hand, I suspect that this one is the Page brothers wanting to get a picture with Beyonce. She may not know she’s posing with a famous wrestler. 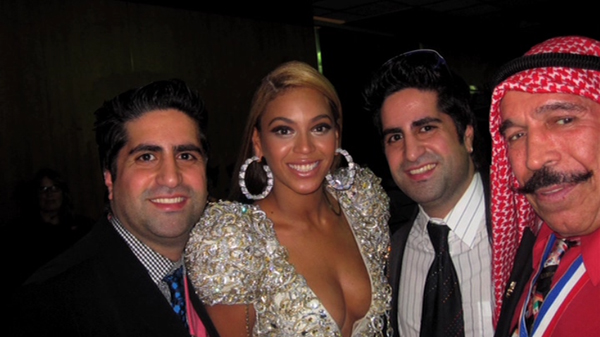 I bet Jay-Z does, though. He’s old enough. Maybe not. I guess she did look happier about posing than him. I shouldn’t make assumptions. 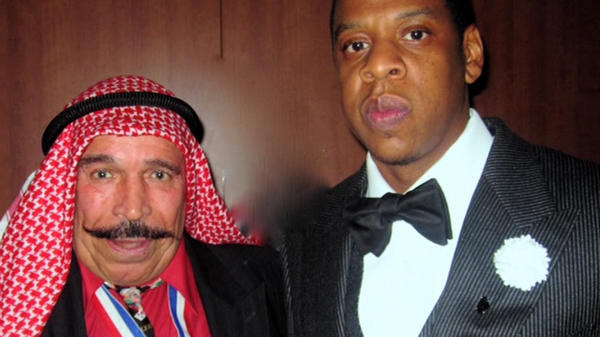 If you’re interested in wrestler stories like I am, this is a good one. And I apologize if I’m harping on this too much, but just by virtue of who it’s about it’s timely in the era of Trump’s attempted Muslim bans. Vaziri is a complicated person, a flawed person, but unquestionably has had an enormous impact on American culture (and even our Olympic wrestling team). If there was someone like him today who didn’t like what was happening in Iran and decided he wanted to be an American, this fucking president would want to stand in his way. It’s stupid.

That type of nativism makes no sense to me. My family has been in the U.S. since one of them started a farmer’s revolt and had to flee Germany I don’t know how many generations ago. So for many years we were American-born, we didn’t have to do anything to get that status, we just inherited it. What kind of fucking assholes would we have to be to think that made us better Americans than a guy who was born somewhere else, but made the choice and the effort to come here and become an American? He believed in this country so he moved across the world to stand behind that belief, taking an enormous risk by defying the Shah, having to find a job and a home in a different culture, a different language. I never had to do that. Trump never had to do that.

Of course he’s a better American than you, you big dummy. He had to earn it. You don’t even know what it means.

Jake "The Snake" Roberts Mick Foley The Iron Sheik The Rock wrestling WWF
This entry was posted on Tuesday, April 11th, 2017 at 10:58 am and is filed under Documentary, Reviews, Sport. You can follow any responses to this entry through the RSS 2.0 feed. You can skip to the end and leave a response. Pinging is currently not allowed.

59 Responses to “The Sheik”