“Thanks for the peace of mind,” he deadpans.

But he found a claw in the wall and he knows it was a full moon and he heard that thing. Being stubborn, he sticks with his theory that it was a werewolf. Being independent, he doesn’t tell anyone. He just sets about taking care of it. 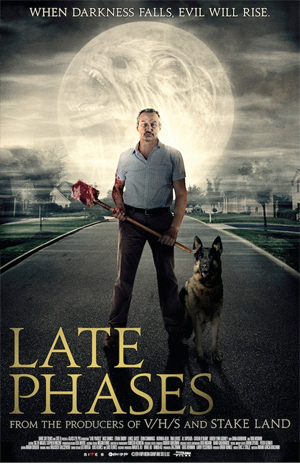 So most of the movie is about what he does in the month before the next full moon. There are training montages, practicing moves with a shovel. There is trap setting. There is detective work. He gets to know some of the people in town, but we know he’s not looking for friends, he’s looking for suspects. The ladies on the church bus feel threatened by him and make him get a separate ride. The pastor (Tom Noonan, LAST ACTION HERO) becomes his smoking buddy. Noonan takes advantage of that quality he has of seeming like a thoughtful, gentle guy while looking like a strange giant. It casts suspicion on him even though he appears to be an absolutely wonderful person. Their conversations can be interpreted as genuine, caring friendship, or a chess match of implied threats.

My favorite suspect: the husband in the iron lung. We don’t even see him. He could be up to something, in my opinion. Ambrose is snooping around for clues and, not knowing what his hands are on, he almost turns the machine off! Major faux pas.

You also got Larry Fessenden (not surprisingly one of the producers of the movie) playing a weirdo who sells grave markers but can also connect Ambrose to guns and ammo. I can imagine that was probly Fessenden’s real life first job.

Like in GRAN TORINO and other old man movies, part of the fun is Ambrose’s prickly persona and the way he unwittingly or uncaringly rubs everybody the wrong way. They try to be nice at first because he’s new in town and he’s blind and he’s a decorated veteran but for most of them the welcome wears out very quickly. And to be fair, it is completely legitimate to complain about him leaving his dead dog in the yard to smell up the place. But he’s likable and we admire his single-minded pursuit of silver bullet justice and they’re uptight and also we suspect they might be werewolves or werewolf-enablers so we’re allowed to be on the asshole’s side for this one and cheer on his bull-in-a-china-shop lifestyle.

Also, because of the genre we’re dealing with, there’s the unique joy of seeing the son’s frustration at the father asking him about the lunar cycle but not admitting it’s because he believes there’s a werewolf situation. He’s not gonna back down from his plan so he just pretends not to hear the criticism and sticks with what he’s doing. In real life this kind of stubbornness can be a pain in the ass because the person is often wrong, but in this he’s the only one who has the right idea.

His blindness of course makes him more vulnerable, but also enhances his level of badass. There’s a WAIT UNTIL DARK fear quality when a creepy cloaked figure shows up in his yard to intimidate him, but we’re also pretty confident he can handle himself.

I didn’t notice any digital business, but the practical FX (by Robert Kurtzman) are alternately good and bad. There’s a nice, disgusting transformation, and good monstery werewolf faces. In the interest of transparency though I gotta say that whenever they show a full body wolf costume it looks pretty ridiculous. There’s a particularly laughable money shot of the man-in-suit jumping slo-mo toward a car. I don’t know about you but for me it didn’t matter, I was already so in love with the character and story by this point that a better werewolf would’ve just been the cherry on top. The bad werewolf is far from a dealbreaker.

In fact, even after seeing these goofy things I was genuinely moved by the story. The stakes are not only survival, or even whether or not he kills the werewolf. The more important thing is resolving the complicated relationship he has with his son. To give you an idea what a mix of badass and emotional we have here, this is a character who (like Tommy Lee Jones for the revenge mission in ROLLING THUNDER) decides to put on his dress uniform before making a last stand against a fucking monster.

You know I got a weakness for certain father-son stories, but I didn’t expect to find myself trying to keep my eyes dry at the end of a werewolf movie. Maybe they should’ve put a human more clearly on the cover so you’d know that’s what it’s about.

I’ll have to keep an eye out for screenwriter Eric Stolze, even though he’s not the actor from MASK and is the writer of a Steve Guttenberg dog movie called I HEART SHAKEY. I guess I should check out his other horror movie, UNDER THE BED, from the director of SILENT NIGHT and ARSENAL.

LATE PHASES is directed by Adrian Garcia Bogliano of Spain. I’ve been told to check out some of his other movies, which include COLD SWEAT and HERE COMES THE DEVIL. I wouldn’t say this is as well directed as the Jim Mickle movies I know Damici from, and some of the acting of the women who don’t like Ambrose could be subtler, in my opinion. But it’s just such a great hero and situation, and such a new but natural mix of genres I enjoy, that this is my favorite new-to-me horror in quite some time.

I know some people have been recommending this to me for a while, so thank all of you, and extra credit to Mr. Majestyk for being the one who finally broke it down in a way that got it through my thick skull this was a must-see. (I think he said blind Vietnam-vet training to fight werewolf.)

Adrian Garcia Bogliano Eric Stolze Erin Cummings Ethan Embry Karen Lynn Gorney Larry Fessenden Nick Damici Robert Kurtzman Tom Noonan werewolves
This entry was posted on Friday, January 13th, 2017 at 10:24 am and is filed under Horror, Reviews. You can follow any responses to this entry through the RSS 2.0 feed. You can skip to the end and leave a response. Pinging is currently not allowed.