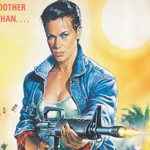 She says they call her Silk “because I’m so fuckin smoooothhh.” The movie itself does not go down as smoothly as its lead character, or its theme song, or its badass movie poster that inspired me to rent it. But of the things in life that I regret, watching this is low on the list.

The story (screenplay by Frederick Bailey, EQUALIZER 2000, TERMINAL JUSTICE) involves some Vietnam vets, heroin smuggling, selling the identities of dead Asian people, threatening witnesses so they don’t testify, “a Hong Kong organization called Gemini Syndicate,” and etc. The investigation involves stakeouts, rotted corpses washing up on shore, tailing a guy, chasing guys through a mall. In the opening scene she climbs a tall structure mid-shootout, jumps on the back of a moving train and blows up a car. The action doesn’t escalate much after that, but there are a bunch of shootouts throughout, mostly pretty decent. 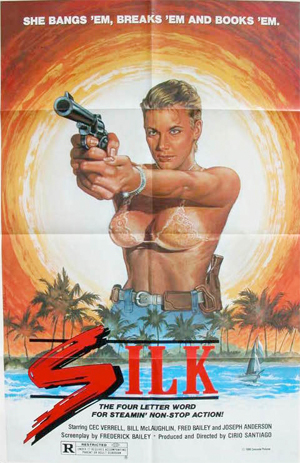 The setting is pretty interesting. Santiago liked to shoot in Hawaii, but it’s novel to see urban Honolulu instead of just tourist beaches. This also means all kinds of Hawaiian shirts in a time and place when cool guys wore them, not just John Lasseter.

One thing we do find out about Silk – she’s good at climbing. When a guy she’s chasing climbs up a construction ladder you can’t help but say “Oh no buddy, climbing things is one of Silk’s many talents.” They have a brief knife fight and then slide down a slanted roof, and there’s a cool stunt of her falling over the edge but grabbing on, before one of those laughably fake shots of a motionless dummy of the guy falling. Of course, this is the type of movie where you’re kind of banking on some ridiculous moments to make it fun.

Here’s one: the lovely sex scene, using dissolves to go from position to position, that suddenly shows a teddy bear propped up on the bed post, wearing sunglasses.

This is just not a very exciting story, but I can almost recommend watching it just for Silk herself. Verrell is a badass woman in the Brigitte Nielsen mode, and there just aren’t enough of those in movies. She’s so cool with her slicked back hair, sunglasses and fingerless gloves, macho touches that she adds to various creative fashions. Sometimes it’s, like, a jean jacket with the collar up, or a camouflaged tank top with sunglasses and a white cap with a duck on it. In fact she must have a whole closet full of tank tops, because she also wears bright blue, red, and black, usually over white, tucked in with a gun on her belt.

But it’s not always masculine. For example she wears a black dress that would have her boobs hanging out except she’s wearing a sleeveless t-shirt under it. She wears high fashion sunglasses to a cockfight. She has a tough glare and knows not to jibber jabber too much.

When she goes on dates, though, her hair is curly, which is kind of disappointing. Be yourself, Silk. If they can’t handle 100% Silk then you don’t need ’em.

When she gets jumped by six guys on the street she holds them off with karate, and throws one guy off a bridge. She gets literally backed into a dead end and keeps fighting them off until some male cops come over with guns and chase the guys away. She might’ve been able to take them. She doesn’t seem relieved, she just pulls her collar up.

There aren’t many reviews of this online, and some of them that are say that Verrell is not a very good actress. I disagree. I think this type of tough girl performance takes skills, and she also has a legitimately effective dramatic scene when she discovers her boyfriend has hidden his connection to the people they’re investigating and confronts him about it.

The credits say “based on the character created by Claudine St. James,” leading to me believe it’s based on some series of pulp novels. The weird thing is that I can’t find anything about an author named Claudine St. James. I did discover that it’s the name of a character in a Harlequin Romance called Back in Kansas, and also a French movie called MEN AND WOMEN OF THE BOIS DE BOULOGNE. And the credit is not included on IMDb. I’m pretty sure they just made it up to make the movie sound more legit.

SILK WILL RETURN IN SILK 2. But it will be a different actress. I will still watch it.

NOTE: I watched this on a Code Red Blu-Ray, but for some reason I can only find the VHS on Amazon.

Cec Verrell Cirio H. Santiago Frederick Bailey Hawaii
This entry was posted on Tuesday, March 14th, 2017 at 7:49 am and is filed under Action, Reviews. You can follow any responses to this entry through the RSS 2.0 feed. You can skip to the end and leave a response. Pinging is currently not allowed.