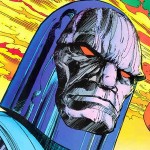 APOCALYPTO opens with a wild pig being chased through the jungle. Eventually the group of hunters on his ass lure him into a trap that impales him on a set of wooden spikes. Victorious, the hunters step through the leaves and reveal themselves to the camera. They’re Mayan so they’re half naked, covered in ritualistic scars and tattoos, piercings through their noses and chins. We’ve seen guys like this in movies before, they’re called “savages.” I just saw a more fantastical version in the “300” trailer before this movie. You see these type of guys, they might as well be bloodthirsty aliens, you just can’t relate.

But then they drop down to the ground and start cutting up the meat, whoo-hooing and laughing. And you realize, these are just some dudes. They could almost be high fiving each other. The hero Jaguar Paw (who looks like Jada Pinkett) cuts up the parts and distributes them, and he tricks his friend Blunted (not a pot joke) into eating the balls. (see, that’s why I knew I could call the pig a he in the first paragraph.) 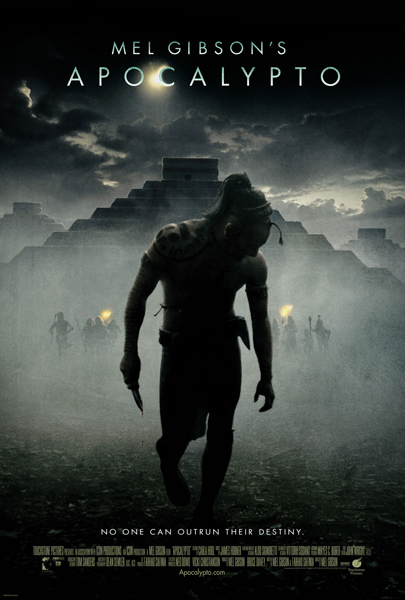 This is a brilliant opening, because Gibson sets up what appear to be authentic ancient Mayans, speaking their real language, but also portrays them as ordinary relatable people. I can’t think of many movies with Mayans in them, but if I could I’m pretty sure you wouldn’t see them joking and laughing too much. They’d be serious, either angry or noble, speaking in mystical broken English. Of course, Gibson ends up overdoing it a little. By the time you’re 15 or 20 minutes in and Blunted is screaming in pain, dunking his dick in a water trough because of an outrageous POLICE ACADEMY style prank, you remember that this was made by a talented man most people agree has lost his mind, and you wonder if he’s ever gonna get on with it. Luckily, the wacky hijinks pretty much disappear, except for one “oh jesus, what were they thinking?” reference to MIDNIGHT COWBOY’s famous “I’m walkin here!” scene.

Eventually trouble comes to Apocalypsia when an army of warriors with torches show up and start killing and kidnapping. You can tell the bad guys from the good guys because they’ve got way more Mayan bling. More scars, more tattoos, fancier hair dos, alot of them wearing jawbones and skulls on their shoulders or heads. It’s kind of a class thing, these guys are hotshot materialists from the big city coming and tormenting the laid back forest people. They take the adults (including Jaguar Paw and Blunted) to use as slaves or human sacrifices. The good news: Jaguar Paw manages to hide his pregnant wife and his little son in a hole. The bad news: they’ll be stuck there for the whole movie, like those two whiny hobbits that were stuck in the tree for the whole lord of the rings part 2.

Eventually the captives get trotted to a big pyramid where a huge crowd watches the royalty cut out their hearts and bounce their severed heads down the side of the pyramid. There are dudes whose job it is to catch the heads in little nets, which is kind of unfair. What if somebody in the crowd wants it? I guess if they were unhappy with the beheading they would throw it back and that would cause problems, so they need the net guys.

This is an amazing scene. There’s a giant crowd shot that looks very digital but when they’re just showing the front it’s an impressive real crowd, and there’s so much detail in this pyramid and the jeweled faces of the royal family. They even got a fat little spoiled brat prince. That’s kind of a trip man, think about a spoiled little bastard from a rich family, now imagine he gets his entertainment by watching his old man cut out hearts and bounce heads down the stairs. Think about the sense of entitlement this little porker is gonna have. Makes ya sick.

Now, I don’t think it’s too much of a spoiler to reveal that Jaguar Paw ends up not getting his head bounced, instead he escapes. And the second half of the movie is the great half of the movie. Because the rest of the movie is one long foot chase. A group of elitist rich boy warriors keeps on Jaguar Paw’s ass just like he did on the pig whose balls he cut off. It becomes about more than just one escaped dude because a sick little girl has prophesized that the “man jaguar” will lead the warriors to their doom or some shit like that. (one of the few superstitious parts in the movie.) Since there is no media at this time, he does not become a folk hero with people all around the Yucatan peninsula showing their support. Instead he jumps down a waterfall, dodges arrows and spears, etc.

Because it’s Mel Gibson, it’s a pretty brutal movie. You got people getting impaled, a guy getting his head bit by a jaguar, a fuckin badass maneuver using some kind of hornets or wasps, and poor Jaguar Paw running over a pile of about a thousand rotting headless corpses. Not to mention the corresponding heads bouncing down the pyramid. All this is good clean american fun, but some of it is pretty emotional too. Like when all the adults are being led away in bondage and the crying children stay behind on their own. (you don’t find out what happens to them, though. Maybe that’s part 2.)

It seems to me like there’s a growing backlash against minimalism and simplicity in entertainment. Everything has to be complicated and overproduced. Nothing can be left ambiguous or unexplained. Characters have to fuckin talk and talk and talk. Nobody wants to just see an expression on an actor’s face that explains more than words, because we’re a bunch of fuckin babies that need to be spoonfed baby food. At least that’s what it seems like to me when I hear people complaining about MIAMI VICE being boring or MISSION:IMPOSSIBLE 3 cleverly obscuring what exactly the weapon is that everybody’s fighting over or CHILDREN OF MEN not wasting everybody’s time by gratuitously explaining exactly how and why its women can’t have babies. I mean, I like all kinds of movies but I am especially a sucker for cinematics like this where there’s not much talking and not much standing around. To me this is pure cinema. It’s pictures and they’re truly in motion. Think MAD MAX. Except on foot. And with less clothes.

The movie goes light on dialogue, light on subplots, light on backstory. The point is for this guy to fuckin run and get his wife and kid out of a hole before they get murdered by assholes or bit by monkeys. Everything else is beside the point. I like it.

I should mention, by the way, that alot of the portrayal of Mayans in the movie is apparently horse shit. You would think if somebody was gonna go through the trouble to make a movie in the dead language of the Mayans they would also try to make it really accurate, but apparently not. I’m sure Mel probaly thinks the Jews sabotaged his consultants, but… nah, just kidding. That was a cheap shot. Let’s set the anti-semite thing aside. I admire Gibson for being crazy enough to make a movie about such an out of left field topic, and make it in the Mayan language, and not really make it about the Mayan empire, exactly. But I guess the historical inaccuracy here is what you should expect when you got a crazy guy making a crazy movie like this.

Most of us won’t be bothered because most of us aren’t scholars of Mayan history. But those who are point out that the movie is combining art and architecture from hundreds of years apart, giving the characters weapons that did not exist at that time, depicting mass killings that historians don’t believe ever happened, showing them rounding up villagers for sacrifice when really they sacrificed members of the royal family. And they even have the Mayans being spooked by an eclipse, which if you think about it is pretty ridiculous. I mean, what’s the most famous thing about the Mayans? Their astrological calendar. The Mayans knew their fuckin astro-shit. Now, if it was me – I could see me getting spooked by an eclipse if I hadn’t had the TV or radio on in a while and didn’t know it was coming. But the Mayans? No way. They calendared that shit. They woulda known exactly when it was gonna happen, they woulda been out there waiting for the eclipse with their little paper viewer things. So alot of people knowledgeable about the Mayan culture have complained about that.

I would also like to add that MIDNIGHT COWBOY did not exist until the 1970s or so, the Mayans did not have access to it and even if they did there was no electricity. Also, the movie does not show that the Mayans maybe invented chocolate, which is a pretty huge oversight. I forget where I read it but somebody once pointed out that Robert Zemeckis has two movies where he has a white man inventing black music. In BACK TO THE FUTURE Michael J. whatsisdick teaches Chuck Berry everything he knows. In FORREST GUMP, Tom Hanks teaches Elvis everything he knows, he doesn’t actually learn it from black musicians. At least Mel doesn’t have a white man inventing chocolate, but still. Give the Mayans credit. Chocolate is delicious. I know it, you know it, Mel Gibson knows it. Who are we trying to fool here, Mel?

Anyway, you gotta watch this as some fantasy adventure like CONAN THE BARBARIAN or something, not as actual history. But if you can do that you got a good one here.

Mel Gibson
This entry was posted on Tuesday, January 9th, 2007 at 12:12 am and is filed under Action, Reviews. You can follow any responses to this entry through the RSS 2.0 feed. You can skip to the end and leave a response. Pinging is currently not allowed.